Who will pay for the Napoli clean-up? 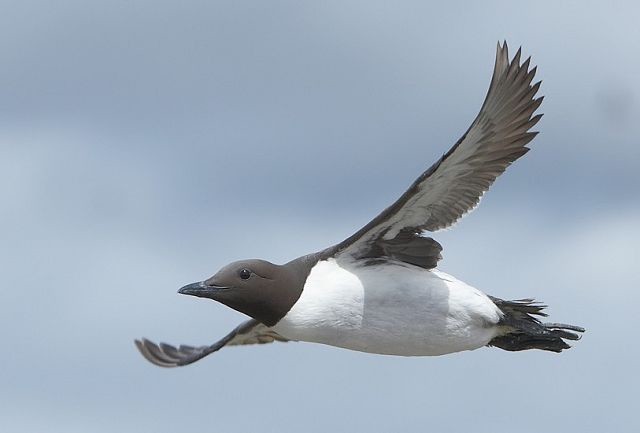 Guillemot: The largest Guillemot colony in the south-west is near the wreck, what impact will the spill have? The RSPB will survey breeding Guillemot numbers this summer to assess long-term damage (photo: Richard Bedford).

Campaigners are urging the government to strengthen legislation that would force polluters to pay for damage to wildlife and nature reserves in the wake of the MSC Napoli wreck off the south-west coast this week.

The RSPB says strengthening a new law, the Environmental Liability Directive (ELD), would force the owners of ships like the Napoli to pay for environmental harm. Those responsible for chemical spills, GM crop contamination and other industrial damage would be held to account as well.

More than 1,000 oiled birds have already been found on beaches following the leak of around 200-tonnes of oil from the Napoli's tanks at the weekend. Guillemots have been hardest-hit, with gulls, Shelducks and one Kittiwake also found. Up to 10,000 birds may have died in total, with Gannets and the critically endangered Balearic Shearwater at risk. RSPB volunteers will comb a 100-mile stretch of beach this weekend, looking for more oiled birds.

The wreck may also threaten as many as 28 sites of special scientific interest, including the Exe Estuary, and Chesil Beach and the Fleet SSSI. Both of these are also Special Protection Areas protected by European law. The Fleet SSSI and Branscombe Bay are two of only three sites in the UK where the rare Scaly Cricket is found, while Berry Head SSSI, Brixham, hosts 400 breeding pairs of Guillemots, the largest Guillemot colony in the south-west. The RSPB will survey breeding Guillemot numbers this summer, to assess long-term damage.

The Environmental Liability Directive is designed to force business to prevent pollution and pay when environmental damage is done. It will become law throughout the EU this April but legislation in England, Wales and Northern Ireland is likely to be so weak that many polluters will escape sanction.

Ministers are reluctant to toughen up the law, fearing business costs will be too high. If they do not, they will exclude more than 2,400 SSSIs which the government is committed to improving, and 375 of the UK's biodiversity action plan species, including Corn Bunting, Red Squirrel and Water Vole. The disaster also highlights the urgent need for marine legislation to protect wildlife sites at sea.

Sandy Luk, the RSPB's expert on the directive, said: "The Napoli disaster is a shocking example of the type of incident this legislation is designed to prevent and compensate for.

"It may well cost business more but it will also save the substantial amounts of public money being spent on the Napoli clean-up and other such incidents.

"Business must be made to take responsibility for the damage it causes and shunning this opportunity will leave wildlife vulnerable to some of the worst environmental damage possible. This legislation is going to be a real test of the government's commitment to the environment."

In a report to be published next month, the RSPB and other groups will detail the consequences for wildlife if the government does not strengthen the directive.