A White-tailed Eagle chick has hatched at RSPB Scotland's Abernethy reserve in Highland.

Visitors to the site have enjoyed the first ever live shots of a wild White-tailed Eagle hatching in the UK via a camera feed. 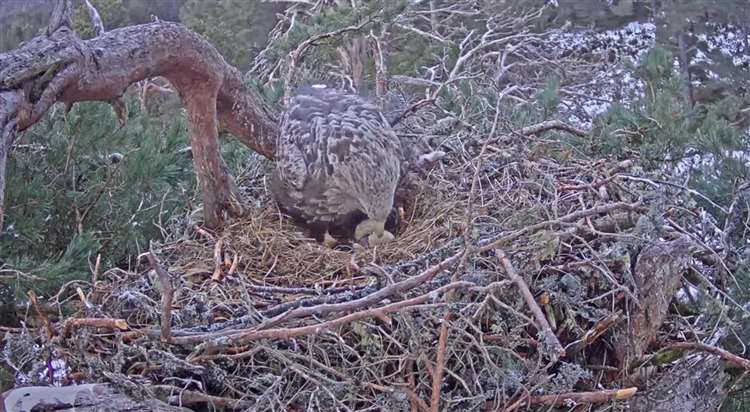 The chick (with attendant adult) on the nest at Abernethy (RSPB Scotland).

The young eaglet is the offspring of Shona and Finn, a pair who are nesting in the vast landscape of the Cairngorms Connect partnership of which RSPB Scotland is part. Eggs were first seen in the nest on 3 March.

Both parents have shared incubating duties, including protecting them from snow and recent storms, before the first egg hatched on 9 April.

The birds' activities are being streamed live to the Loch Garten Nature Centre, via a camera which has been hidden in a stick 3 m from the nest to avoid disturbing the birds. This is the first time such a method has been used in the UK after successful trials in Latvia and Estonia.

Fergus Cumberland, visitor experience manager for RSPB Scotland, said: "The response to the eagles from the public has been one of excitement and anticipation. The true character and personalities of these birds are on full display for the public to experience and it is a wonder to watch it all unfold.

"Now to see that they've hatched their first chick is incredible. We feel so privileged to have been able to witness such a special moment."