A White Stork has been returned to Knepp Estate after it was found with a damaged wing in East Sussex.

East Sussex Wildlife Rescue and Ambulance Service (WRAS) receive a call on 2 June about a stricken bird at Mayfield. An ambulance was dispatched, and rescuer Julie Stafford managed to corral the stork into a position where she was able to catch it using a rescue pole and net.

The bird was driven to WRAS's Casualty Care Centre in Whitesmith, near Lewes, where the care team discovered the bird's wing was badly fractured. Its wounds were cleaned up and medication was administered. 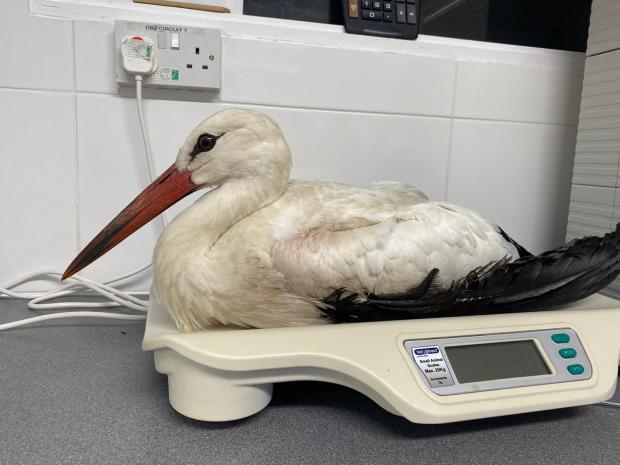 The White Stork in care (WRAS).

On 7 June, WRAS vet Mike Symons anaesthetised the stork while Katie managed to make a special mask as the bird's beak was too long for conventional masks. The fracture was too severe to be fixable, resulting in the damaged section of wing being amputated.

After the operation the bird was bedded down and WRAS's Care Team spent the next few weeks helping the bird to recover to full health again. On 3 July, the stork was transported back to Knepp to be released into a six-acre enclosure.

The stork was released in the summer of 2020 but managed to fly to Wadhurst where it joined others in that area before flying down to Mayfield. East Sussex WRAS founder Trevor Weeks MBE said the whole experience was "certainly a first for WRAS".

The total cost of the rescue operation and recovery is expected to reach more than £1,200, and the White Stork Project is contributing towards this cost.