The range of Brown Hairstreak in south-west Wales has more than halved over the past decade, according to a study from Butterfly Conservation (BC).

Brown Hairstreak is listed under the Environment (Wales) Act 2016 as a species of principal importance for the purpose of maintaining and enhancing biodiversity in Wales. Despite this, the study shows that smallholdings are now the main refuges of the butterfly, which is just about hanging on in the region.

To help reverse the decline, BC recommends that its favoured blackthorn hedges should not be flailed every year and instead left uncut at least every alternate year.

Richard Smith, of Butterfly Conservation's South Wales branch, said: "The adult butterflies live mainly in the tree canopy (typically ash) but lay eggs on young shoots of low-growing blackthorn in the hedges below. The eggs remain on the blackthorn shoots through the winter, with the caterpillars hatching the following spring. Mechanical flailing of a hedge or scrub during the autumn and winter period has been shown to remove 80-90% of eggs. If this continues year-on-year, the ever-decreasing population vanishes within two or three years." 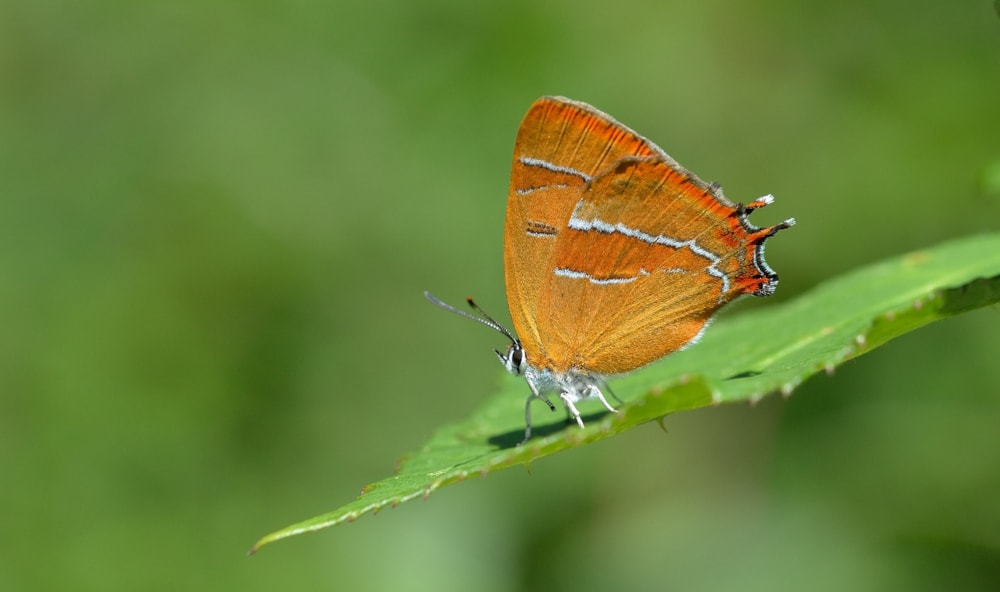 Hedging experts advise that once every three or four years is a suitable interval for trimming hedges. Despite this, mechanical flailing of most farm hedges every autumn/winter seems to be common practice. This annual flailing is far more intensive than traditional labour-based management, in which hedges were laid every few years on rotation across the farm.

The study, based on intensive regular surveys by volunteers over 20 years, shows how Brown Hairstreak butterflies breeding on hedgerows on flatter, although often wetter, low-lying pasture (particularly in the Taf and lower Tywi valleys in the St Clears, Carmarthen and Pontargothi areas), have been especially hard hit. In contrast, those using hedgerows on the slopes of the mid and lower Teifi valley, which are less easily workable with machines and often on small holdings, are more able to persist in the landscape.

Ash disease and climate change may also play a part in the recent decline of the Brown Hairstreak in Wales, but finding direct evidence of this is difficult. However, the apparent increase in annual hedge flailing is more likely a major contributor to the decline of Brown Hairstreak and is something which land managers can easily do something about by changing practices.

To help Brown Hairstreak thrive, the study suggests that fields below 150 m asl with blackthorn hedges or blackthorn scrub in South-West Wales should be left uncut every other year as a minmum, and ideally cut on a three to four-year cycle.

BC also expects the Welsh Government to encourage less intensive farming practices, given its commitment to tackling both climate change and the biodiversity crisis. Not only should this benefit Brown Hairstreak, but also enhance wildflowers for pollinators along the base of hedges and provide berries for birds in the autumn. Currently too many hedges are over-managed and inhospitable to wildlife.