Warblers Advance on all Fronts 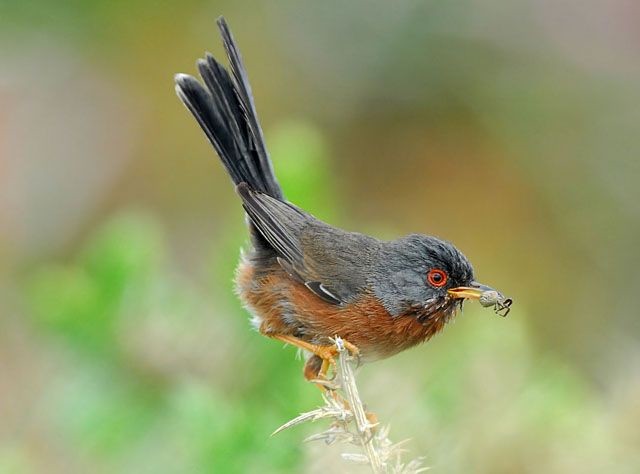 Britain's most colourful warbler is spreading its territorial wings because warmer winters and better heathland management have increased its chances of survival. The latest UK survey of Dartford Warblers, by the RSPB, BTO, Natural England and Forestry Commission England, shows that numbers have soared by 70 per cent since the last count in 1994. The bird has returned to Wales, the Midlands and East Anglia and now there are more than 3,000 pairs - the highest tally for more than 40 years.

But while the Dartford Warbler is flying north, west and east from its strongholds in southern England, conservationists say that more is needed to protect and restore heathlands to help the bird further its advance.

Simon Wotton, Research Biologist at the RSPB, said: "This survey is fantastic news for a very vulnerable bird, particularly because it has moved to higher ground not used by Dartford Warblers for many years. Warmer winters mean the birds are likely to push even further north but they can only do that if there are heathland sites available, which are protected from development. If the government is to help wildlife adapt to climate change it should be assigning more land for the creation of habitats to help birds like these." 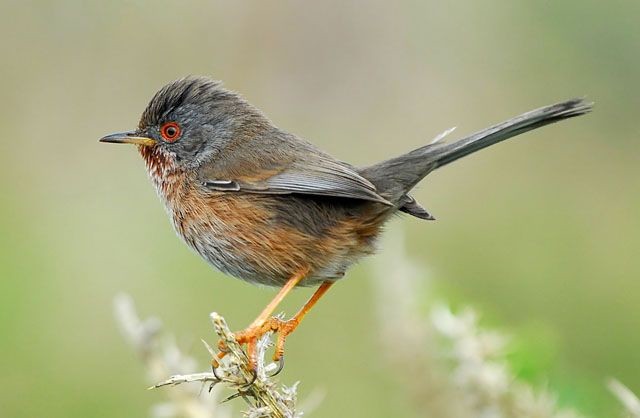 "The Dartford Warbler is a wonderful species but its vulnerability to the cold and wet, which could still be a problem as our climate alters, means all safeguards possible must be put in place."

Two harsh winters left just 11 pairs of this attractive bird in 1963 and the warbler's revival, to an estimated 3,208 pairs from 1,890 in 1994, is due both to milder winters and heathland improvements, partly funded by the £25 million Tomorrow's Heathland Heritage (THH) initiative. But the bird remains vulnerable, and on the Thames Basin Heaths in Berkshire, Hampshire and Surrey, where surrounding land is being targeted by house builders, numbers fell by 40 per cent from 2005 to 2006. The reasons are unclear but losses like that underline the importance of the THH and of protection and management of the bird's existing strongholds. The creation of new heathland sites is vital to help Dartford Warblers move further afield.

The Dartford Warbler is an active, inquisitive bird rarely allowing us more than a fleeting glimpse before diving for cover in gorse and heather. If they are lucky, heathland visitors may now see males singing from low perches or skulking with their mates between dense bushes and scrub. 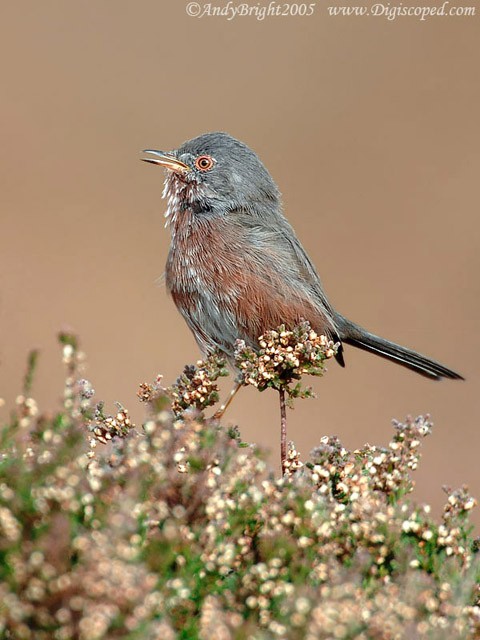 Greg Conway, Research Ecologist at the BTO, said: "We are all very grateful to the hundreds of birdwatchers across England and Wales that made this survey such a success. Not only did they go out and count birds on traditional Dartford Warbler sites, they also found new sites in areas where the species had been absent for forty years or more. We organise lots of surveys of disappearing species and it is great to be involved in a survey with some good news."

Phil Grice, senior ornithologist at Natural England, said: "Part of the spectacular increase in Dartford Warbler numbers is no doubt down to the massive £25 million plus investment in the Tomorrow's Heathland Heritage, a ten year programme led by Natural England together with a consortium of 140 partners, with support from the Heritage Lottery Fund. The result is the restoration of many of England's treasure trove of heathlands to a healthy condition supporting delightful native wild species like the Marsh Gentian, Dartford Warbler, Natterjack Toad and Silver-studded Blue butterfly that depend on it for survival.

"We remain concerned about the very recent decline in numbers on the Thames Basins Heaths which reflects the vulnerability of this beautiful bird, which is why we are working hard for to maintain the right conditions for Dartford Warblers and other key species on the internationally important wildlife site."

This is the fourth national Dartford Warbler survey. The first was in 1974 (560 pairs), and was repeated in 1984 (420 pairs) and 1994 (1,890). The population estimate for England and Wales is 3,208 pairs. Dartford Warblers were also surveyed on the Channel Islands for the first time, where 85 pairs were found. The Dartford Warbler survey forms part of the SCARABBS (Statutory Conservation Agencies and RSPB Annual Breeding Bird Surveys) agreement, and will be surveyed every 12 years.

The first Dartford Warbler in Britain was identified after a pair were shot at Bexley Heath near Dartford, Kent in 1773. The best places to see them in the UK are Arne, and Canford Heath and Holt Heath in Dorset, Chobham Common, Surrey, Dunwich Heath, Suffolk and the New Forest, Hampshire.

Written by: RSPB, BTO, Natural England and the Forestry Commission England
Login to leave a comment
Return to List