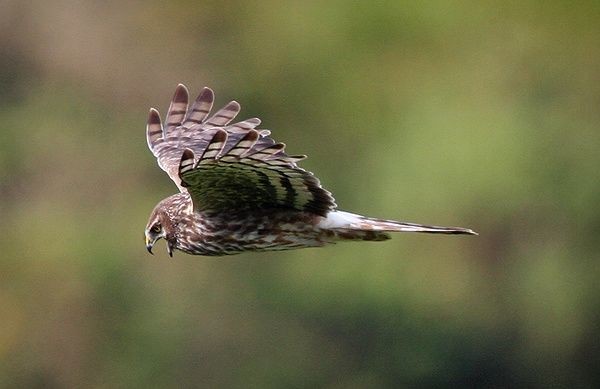 The pair of Hen Harriers has settled in Northumberland, and the RSPB, Forestry Commission, National Wildlife Crime Unit and Northumbria Police are working together to safeguard the nest.

It is estimated that there should be more than 200 harrier nests in England, but only 15 active harrier nests are known in the whole of England this year. The Northumberland nest is one of only three nests outside of the Forest of Bowland area of Lancashire; where most of the land is owned by United Utilities and the nests are monitored by the RSPB and others.

More than 25 volunteers are helping to watch over the Northumberland birds and they are working day and night alongside RSPB officers, Forestry Commission rangers, members of the Northumberland and Tyneside Bird Club and the Police. The harrier 'task force' is equipped with high-powered optics, cameras, specialist night vision equipment and other security measures are in place in the area where the birds are nesting.

The importance of protecting the harrier nest has been highlighted by an incident last year, when a female harrier nesting in Northumberland disappeared in mysterious circumstances. The bird is believed to have been shot while away from her nest, which contained two eggs. Another nest 2 km away failed when the eggs vanished.

This year there have already been several reports of Hen Harriers disappearing from suitable nesting areas in England, and incidents in North Yorkshire and Northumberland are already under investigation by the police.

Amanda Miller, RSPB Conservation Manager for North East England said: "The English Hen Harrier population is perilously low, so every nest is precious and it's wonderful news that these magnificent birds are nesting in Northumberland. The dedication and commitment of local volunteers has been tremendous and we are very grateful to them for giving of their time to help guard these special birds.

"However, it's a sad state of affairs that in the 21st century, the RSPB still has to spend so much time and money safeguarding Hen Harriers and other birds of prey even though they are fully protected under UK law."

Tom Dearnley, Forestry Commission Ecologist, said: "These are incredibly charismatic birds. But they can also be very unpredictable in their nesting habits, making this site even more important. This area of Northumberland is exceptional for its bird of prey populations thanks to sensitive habitat management. We look forwards to working with partners to secure a future for this exceptional and rare species."

Studies have shown that the Hen Harrier should occur across most of the uplands of northern England and estimates suggest there should be at least 230 Hen Harrier nests in England. In recent years, however, only a handful of Hen Harriers have nested in England. The only regular breeding area in England is the Forest of Bowland in Lancashire. Sadly, Hen Harriers are often the victims of illegal persecution; including egg theft, the killing of adults, deliberate disturbance of nesting birds and destruction of nests.

Steve Downing of the National Wildlife Crime Unit is the national co-ordinator of Operation Artemis, the police campaign set up in 2004 to combat the illegal killing of Hen Harriers. He said: "Illegal persecution is the single most important factor limiting the spread of Hen Harriers in England. The absence of harriers from large swathes of uplands across England indicates the scale of illegal killing and interference this bird faces. There is absolutely no excuse or justification for persecuting these birds and if anyone is caught persecuting a Hen Harrier, the courts have made it clear that a prison sentence is a likely outcome."

This project has been supported by SITA Trust, which makes awards through the Landfill Communities Fund. SITA Trust provides funding to improve biodiversity and the environment around landfill sites throughout England. SITA Trust receives its funding from the waste management company, SITA UK.