Voles are booming in Kielder

Tawny Owl numbers in Kielder Forest are soaring as the UK's longest-running research project on the bird enters its 30th year.

Despite the harsh winter, Tawnies are benefiting from a remarkable recovery in the local vole population. The diminutive mammals are a favourite food for birds of prey, but over recent years their numbers have declined in the 155,000-acre Northumberland wilderness.

Now Forestry Commission experts believe that the arctic weather, with months of snow cover, has given the voles a break from high levels of predation, as owls and other birds struggled to hunt successfully. 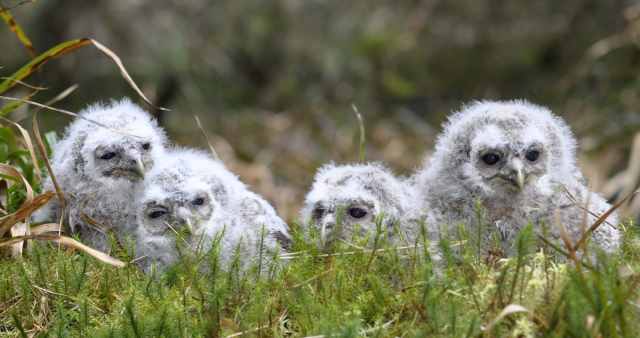 Broods of four chicks are indicative of a good year (Photo: Forestry Commission)

The biggest beneficiary — apart from the voles themselves — have been Tawnies, as they are one of the hardiest, most durable and long-lived of all owls. They managed to make it through the grim weather with a relatively low level of fatalities, unlike Barn Owls, and after the famine they are enjoying the vole feast.

Experts checking the 200 nest boxes erected in the forest have recorded 105 nesting pairs this spring, with three broods of five chicks found (two to four is more common). 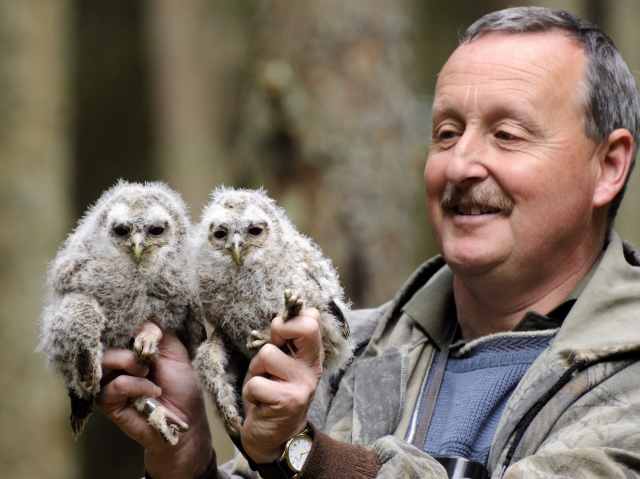 Tom Dearnley, Forestry Commission Ecologist, said: "Voles are critical for forest wildlife as they are an important food for many animals. But mild winters in recent years have hit them hard as they haven't had a rest from being hunted. But the arctic weather has changed all that. We have been working with Aberdeen University on vole population cycles in Kielder, and use a vole index to measure how plentiful they are. That has shot through the roof this year and the Tawnies are taking full advantage, with 49 dead voles removed from just one owl box." 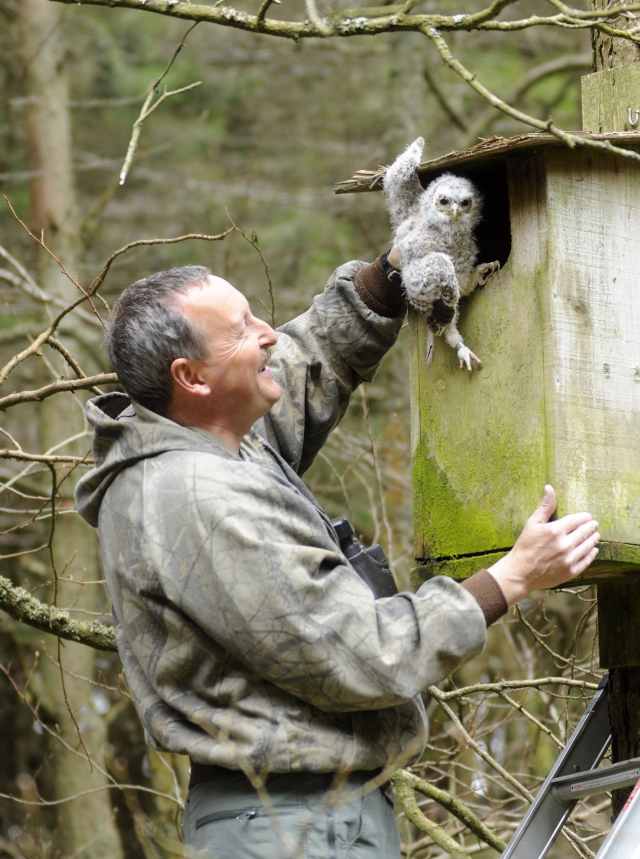 Martin returns a ringed chick to one of the 200 boxes in the forest. (Photo: Forestry Commission)

It was thanks to the Kielder Tawny Owl project that experts were able to keep tabs on a remarkable female who, at the age of 21, hatched three healthy chicks — the oldest breeding Tawny in the world. She was ringed in 1987 in Kershope Forest, part of the western bloc of Kielder, but last year failed to return to her nest box, leaving open the possibility that she has succumbed to old age. Her longevity record was a feather in the cap for the Forestry Commission-backed project, which has seen nest boxes erected in Kielder to make up for a lack of suitable natural sites.

Nature fans can find out more, and also join experts as they ring Tawny Owl chicks, on two owl nights on 12 and 21 May. These events, based around Kielder Castle and Sidwood, near Greenhaugh, are being hosted by the Forestry Commission as part of the Kielder Partnership's Wild about Kielder season. The events start at 7pm and booking is essential on 01434 220242. The cost is £8 per person.

The Kielder Partnership is a public, voluntary and private-sector collaboration working to develop Kielder Water & Forest Park as an inspirational place for leisure, exploration and fun. Partners are the Calvert Trust Kielder, Environment Agency, Forestry Commission, Northumberland County Council and Northumbrian Water, plus representation from community groups. The Northumberland Wildlife Trust is an associate member.