Increasing human activity and strengthening demand for coast-side developments pose growing risks to Australia's coastal wetlands, and the threatened species that they support.

For almost six months of the year, more than 70 per cent of the world's Far Eastern Curlews call Australia home. It's the last stop on their southward migration and where they build their energy and fat stores to prepare for migration back to their breeding grounds in the Arctic. The scale of habitat loss in Australia may not be as dramatic as in the Yellow Sea, but Australians' love for the coast has undoubtedly contributed to the decline in the global Far Eastern Curlew population. 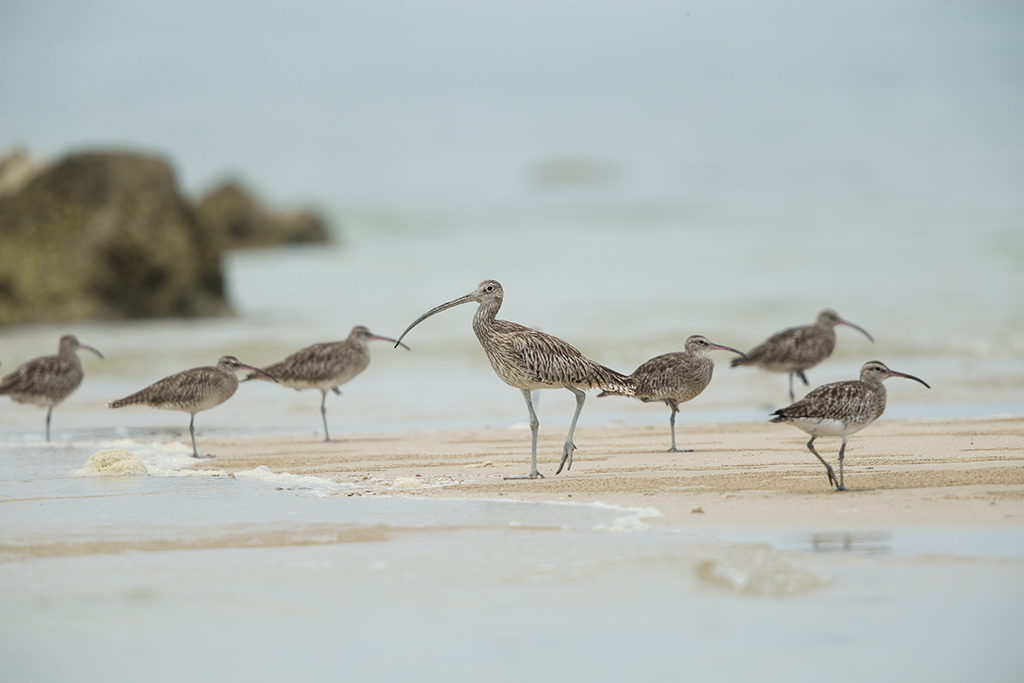 Far Eastern Curlew (centre, with Eurasian Whimbrels) is a notoriously shy species that is threatened by development and disturbance along Australia's coasts. Photo: Dave Williams.

The species is notoriously wary of humans, and with increasingly less undisturbed feeding and roosting habitat at the southernmost end of its migration journey, pressure on the remaining population continues to grow. This makes the places that still support large numbers of Far Eastern Curlews even more important to the species' survival.

Moreton Bay, Queensland, is one such place. The vast mudflats of the area provide a haven for more than 40,000 overwintering migratory shorebirds each year, including in excess of 3,000 Far Eastern Curlews. For this reason, it is recognised by BirdLife as both an Important Bird and Biodiversity Area (IBA) and a Key Biodiversity Area (KBA).

Moreton Bay is also an important place for juvenile Far Eastern Curlews, with many young birds remaining in the bay for up to two years after their first southward migration. Here, they master the foraging skills they'll need to sustain them for many migrations to come. In theory, Moreton Bay should continue to remain a safe place for Far Eastern Curlews. Listed under the Ramsar Convention on Wetlands, it's protected under this international treaty and Australian domestic law as one of the most important wetlands in the world.

However, it's possible that the Australian government could soon approve a marina and residential development within the Moreton Bay Ramsar site, destroying important habitat for Far Eastern Curlew, and setting a dangerous precedent for the future protection of Ramsar-listed wetlands across the world.

The scale of habitat loss that would be caused by the proposed Toondah Harbour development might pale in comparison to that in other parts of the flyway, but if this development goes ahead, Australia will be sending a clear message to the international community that even the most important wetlands in the world are not safe from destructive development. This does not bode well for Far Eastern Curlew. Migratory shorebirds in the East Asian-Australian Flyway (EAAF) and across the world are in desperate need of stronger international collaboration and conservation, not actions that erode and undermine one of the most important international environmental treaties.

It's ironic that the Australian government could be responsible for setting such a dangerous precedent at a time when they are otherwise leading in international efforts to save Far Eastern Curlew. The development of the International Single Species Action Plan for the Conservation of Far Eastern Curlew, recently endorsed by the EAAF Partnership, was led by the Australia. Remaining curlew habitat across the EAAF is precious, and must be protected.

A development within the Moreton Bay Ramsar site, one of the most important places for Far Eastern Curlew in the world, will not only be bad news for those individuals that call Moreton Bay home, but for Far Eastern Curlews and other threatened waterbirds across the world. BirdLife Australia supporters have been actively calling on the Queensland and Australian governments to make the right decision and respect Ramsar, rather than sanction a development in a Ramsar-listed wetland. If they don't, it means even more problems for the Numeniini, a family which is already known to be struggling worldwide.