Upland birds on the up on the moors

The Eastern Moors in Derbyshire's Peak District is bucking the national trend with an increase in the numbers of threatened bird species.

A survey of breeding birds at Eastern Moors has revealed the Peak District site is a surprising haven for upland species that are vanishing elsewhere in Britain.

Since the National Trust and the RSPB took over the management of the moors on the edge of Sheffield five years ago, Whinchat numbers have more than doubled, increasing from 25 pairs in 2010 to 60 in 2015. Whinchat arrives every summer from Africa to breed in the British uplands, and was recently added to the Red List of high conservation concern following a 50 per cent decline in Britain since the 1990s. 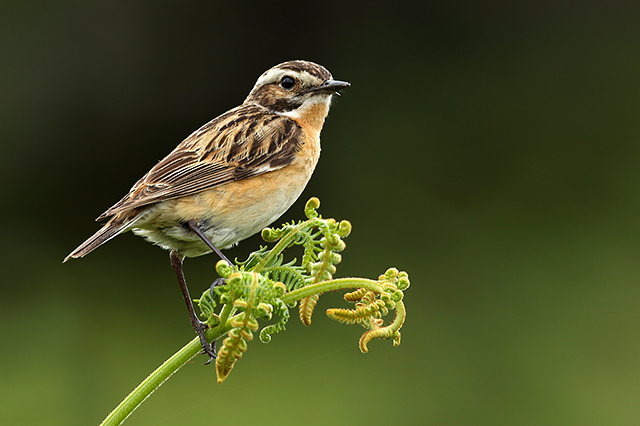 Another species faring well at Eastern Moors but struggling nationally is Eurasian Curlew. The wading bird with its distinct long, curved bill has risen from 15 pairs in 1990 to 24. In contrast, curlews have almost halved over the past two decades in Britain and, like Whinchat, also recently became listed as a bird of high conservation concern.

In addition, Skylarks have almost tripled at Eastern Moors, rising from 71 to 200 pairs and Meadow Pipits are more common now at the site than in 2010.

Nature conservationists at the Eastern Moors Partnership believe the success of these birds is due to a gradual reduction in overall grazing and a shift towards the use of cattle on the land. When cattle graze they create a varied habitat, which provides a range of potential nest sites and food sources such as insects.

Rachel Bennett from the Eastern Moors Partnership said: "The survey results are really important as they tell us that we are managing the land in a way that’s having a positive impact on some of our most threatened wildlife. Monitoring these bird species every few years enables us to understand how they respond to changes in management and how they are faring in the face of national declines."