Unprecedented wreck of Cassin's Auklets along US Pacific Coast

The Pacific coast of North America has been experiencing what has been described as an 'unprecedented' case of seabird deaths in recent weeks.

Around Halloween last year, thousands of Cassin's Auklets began to wash up dead or dying along North America's Pacific coast between California's Farallon Islands in the south and the Queen Charlotte Islands off central British Columbia in the north.

Julia Parrish, a University of Washington seabird ecologist who oversees the Coastal Observation and Seabird Survey Team (COASST), a program that has tracked West Coast seabird deaths for almost 20 years, commented: "This is just massive, unprecedented. We may be talking about 50,000 to 100,000 deaths. So far." 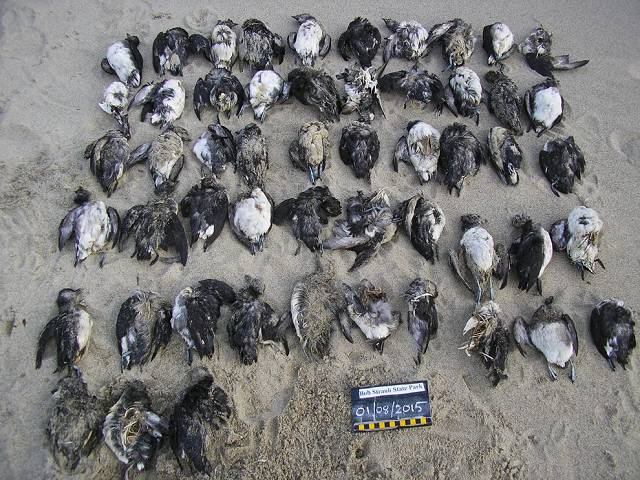 The initial pulse of carcasses washing ashore was at first unsurprising. Summer 2014 had resulted in an extremely successful breeding season for Cassin's Auklet with unusually high numbers of juveniles fledged, and a larger-than-average death toll was always likely during the youngsters' first winter. However, the sheer magnitude of the event — no previous bird mortality event tracked by the U.S. Geological Survey since 1980 has exceeded 11,000 deaths — and its wide geographical spread has left scientists perplexed. On some beaches, the death toll of auklets was 100 times greater than any previously tallies there, and six times worse per-kilometre than the body count recorded after the 1989 Exxon Valdez oil spill in Prince William Sound, Alaska.

Mike Szumski, U.S. Fish and Wildlife Service biologist, collected 250 carcasses from one small stretch of Oregon beach on Christmas Eve, and left almost as many behind. He recalled: "You'd find them piled up in clusters on the wrack line, where the tide leaves sea grasses and debris. Most were in these states of decay, but every now and then we'd see tracks coming out of the water and find a bird that was just barely clinging to life. They were just skin and bones."

Scientists are now trying to figure out what exactly has happened to cause such a mass die-off. The USGS and others have performed necropsies on several of the emaciated auklets. With no evidence of disease, trauma or oil-covered feathers, it seems that the birds have simply starved to death.

Bill Sydeman, a senior scientist at California's Farallon Institute, believes the deaths are related to a massive 'blob' of warm water that heated the North Pacific in 2014, which also contributed to California's drought and 2014 being the hottest year on record. This is likely to have decreased to the favourability of the waters for the zooplankton on which the auklets — among other birds — feed. However, that does not explain why the die-off has (so far) been restricted to just one species of seabird.