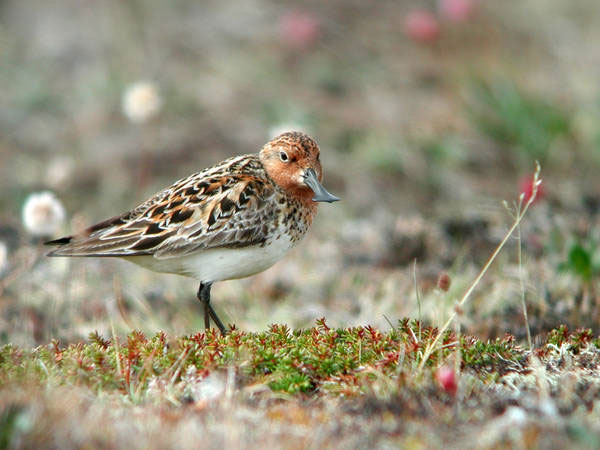 The Spoon-billed Sandpiper Eurynorhynchus pygmeus, a charismatic wader with a remarkable, unique spatulate bill, has declined by more than 80% over the last 30 years, and experts are in a race to find out why before the species dwindles to extinction.

"Today we believe there are fewer than 400 breeding pairs of Spoon-billed Sandpipers left, and we urgently need to find out why they are disappearing" said Mike Crosby of BirdLife International.

Spoon-billed Sandpipers breed during June-July in a small strip of coastal Arctic tundra in Chuchotka, northeast Russia. They migrate thousands of kilometres to winter along coasts in South and South-East Asia. Currently, they are classified as Endangered.

Experts from ten Asian countries along the Spoon-billed Sandpiper's flyways recently met in Samut Sakhon, Thailand, to figure out what needs to be done to save the species. They drew up an International Species Action Plan, under the auspices of the Convention on Migratory Species (CMS).

"The Plan recommends improved habitat protection and places an emphasis on encouraging governments to take necessary measures to protect the species and its threatened habitat," said Dr Christoph Zöckler of ArcCona Consulting Cambridge, UK, one of the organisers of the meeting.

Threats to the Spoon-billed Sandpiper on its breeding areas include predation, human disturbance and the drying out of tundra habitat due to climate change.

"However, we believe the main reasons for the species's decline are along migratory flyways, where large-scale drainage of tidal mudflats to 'reclaim' land for agriculture, urban expansion and industrial development have greatly reduced the species's feeding areas, especially at stop-over sites," said Dr Zöckler. "The problems caused by habitat loss are exacerbated by the hunting and trapping of shorebirds for food in some countries," he added.

The Inner Gulf of Thailand between Samut Sakhon and Phetchaburi is one of only three known regular wintering sites for the species worldwide.

"The Inner Gulf is a vital location for Spoon-billed Sandpipers," said Kritsana Kaewplong of the Bird Conservation Society of Thailand (BCST, BirdLife in Thailand), the local organiser of the workshop. "Around ten to 20 birds are seen in the area each winter, which represents a significant percentage of the global population."

In Thailand, Spoon-billed Sandpipers feed on salt pans, and a continuation of this and other sustainable uses by local people in the coastal zone may be important in maintaining the species's habitat. Before and after the workshop, a survey team led by the Japan Wetlands Action Network (JAWAN), Tokyo, was joined by local birdwatchers from the Khok Kham Conservation Club and BCST to survey sites in the Inner Gulf for Spoon-billed Sandpipers and found a total of 11 birds at four locations, one of them a previously unknown site for the species. BCST is currently developing a conservation project for the Inner Gulf and an Action Plan will be finalised and published in summer 2007.

"Regular surveys of Spoon-billed Sandpipers are vital for finding out whether the Action Plan is having the desired effect," explained Kaewplong.

The Action Plan workshop was hosted by the Department of Marine and Coastal Resources, Ministry of Environment and Natural Resources, on the initiative of BirdLife International, BCST and ArcCona Consulting, and was financially supported by the Manfred Hermsen Foundation, Bremen, and the RSPB (BirdLife in the UK). Survey work in the Inner Gulf of Thailand was supported by the Keidanren Nature Conservation Fund, Tokyo.