Unique bird to be given head start in life

Conservationists will attempt to give dozens of Critically Endangered Spoon-billed Sandpipers a head start this summer, by hand-rearing them for the first weeks of their lives in Russia. The new strategy is part of an ongoing international conservation effort that stretches from the coast of Bangladesh and Burma to the Russian Far East, and even has an outpost at Slimbridge in Gloucestershire.

Evidence from Burma points to the success of efforts to stop hunting. This news has encouraged conservationists to take this unusual step at the birds' breeding ground 8,000km away in Chukotka in the Russian Far East. Spoon-billed Sandpipers are estimated to number as few as 100 pairs and subsistence hunting in coastal Burma and Bangladesh is believed to be the most immediate threat to their future. A series of micro-grants over the last four years has helped villagers to buy nets and boats so that they have an alternative livelihood. This spring, an expedition to Burma confirmed that bird-hunting is being addressed successfully.

Evgeny Syroechkovsky, Chief Executive of Birds Russia, said: "With the most immediate threat to the birds' future being tackled, giving this generation a head start should help increase numbers returning to the breeding grounds in two years' time."

Conservationists travelling to the Spoon-billed Sandpipers' sub-Arctic breeding grounds are confident they can increase the birds' productivity several fold. Surveys from the last few years show that just 0.6 birds fledge from each nest of four eggs on average. Experience from last summer has shown that experts can successfully raise at least three per nest over the same period by hand-rearing. Added to this, it is hoped some pairs will lay a second clutch that they will raise themselves.

Nigel Jarrett, Head of Conservation Breeding at WWT, said: "We took eggs into captivity last summer, and the birds we hatched are the genesis of a conservation breeding programme, should it come to the worst. But while last year was a step into the unknown in one of the most remote parts of the globe, this year we hope to achieve even more." 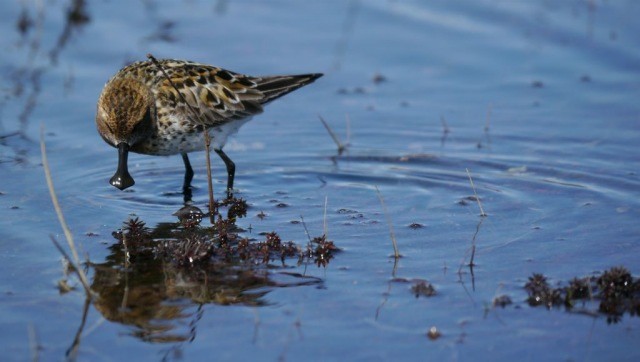 At three weeks old, the hand-reared birds will be released and they will instinctively make the long migration back to south Asia. Hand-rearing birds for release also gives the chance to mark the birds with tiny coloured leg flags. Easily identified, the individual birds can be identified through life to give an indication of the success of conservation measures.

Hunting is one of the most immediate threats to the Spoon-billed Sandpiper and the many other endangered birds that use the east coast of Asia as a migratory flyway. Reclamation of coastal mudflats in the Yellow Sea and elsewhere has left birds with few places to feed safely on migration. The international conservation movement is arguing for a more ecologically sensitive approach to development. It is hoped that if one good thing can come from the drastic plight of the Spoon-billed Sandpiper, it will draw attention to the causes of its decline.

Dr Debbie Pain, Director of Conservation at WWT, said: "The level of support for the Spoon-billed Sandpiper has been phenomenal. It is only thanks to donations from thousands of individuals. plus major grants from the UK government's Darwin Initiative and the Save Our Species fund, that we are able to put this emergency plan into action. But it is expensive work and we are still £50,000 short just for this year. I urge anyone who is taken by the Spoon-billed Sandpiper to make a donation, however small. The work that it will pay for will have benefits for millions of other birds besides."

The expedition team will be blogging their progress. Visit www.saving-spoon-billed-sandpiper.com or search for the hashtag #sbs2012ex on twitter.