Uluguru Bush-shrike Found Over the Limit 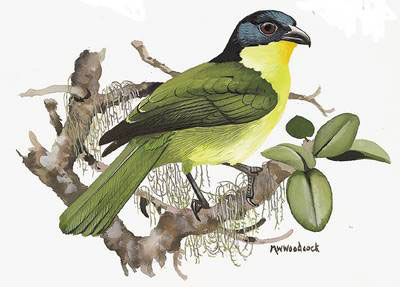 Until January this year, a single doubtful record from 1981 was the only evidence for the presence of Critically Endangered Uluguru Bush-shrike Malaconotus alius in the Uluguru South Forest Reserve in Tanzania, which was believed to be above its normal altitudinal limit. Repeated surveys had failed to find it.

Now a team from Wildlife Conservation Society of Tanzania (WCST, BirdLife Partner in Tanzania), having repeatedly sighted the bird in the Uluguru South Forest Reserve, has evidence that suggests the bush-shrikes are breeding there.

The Uluguru North and South Forest Reserves are separated by the Bunduki Gap (1.5km), thought by many to be a potential obstacle to movements of Ulugura Bush-shrike, a canopy-reliant bird.

Jasson John of WCST, who led the survey team, says that on 24th January 2007 at 8:25 am, a pair of bush-shrikes was attracted by playback of their calls to a census point at an altitude of 1,739 metres. "The area is the nearest part of Uluguru South to the Uluguru North Reserve, and has almost the same forest structure as that within Uluguru North. This was about 3.4 kilometres from the nearest record of the Uluguru Bush-shrike in Uluguru North."

Later that morning the team heard another Uluguru Bush-shrike about 400 metres from the first pair. "This time it was the highest record of our survey in terms of altitude, at 1,885 metres."

Between 23rd and 28th February, Jasson, with WCST's Elias Mungaya, returned to Uluguru South at the same census point. "We were aiming to catch the original pair, so we put mist-nets up in the tree canopy, and attracted the birds by playing back their calls." But they refused to be caught. "On two occasions one flew into but bounced back out of the mist-nets, and on another occasion one was trying to attack a Loveridge's Sunbird, another of Uluguru's endemics, that was caught in the nets."

The pair rarely came to the playback together. A month before, the birds had always been seen together. Jasson has an explanation: "we think the female was probably sitting on a nest."

The team from WCST was supported by the Critical Ecosystem Partnership Fund (CEPF).