UK can have wind power and wildlife

b011711d-8fb5-4c4c-9f95-c2ad308dc994
The UK could greatly increase the number of onshore wind farms it builds without trashing wildlife. So says an RSPB-commissioned report from the Institute for European Environmental Policy (IEEP), which found the UK lagging far behind in the drive for wind power. The report calls on the Government to step in to ensure better and quicker decisions on wind farms, while protecting wildlife and winning the backing of local communities. 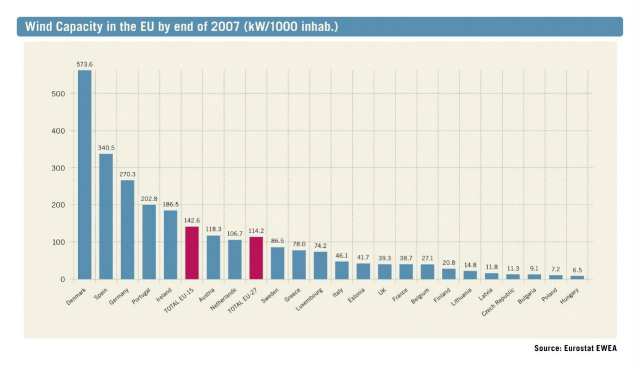 Wind turbines met just less than 2% of the UK’s electricity demands in 2007, though deployment levels varied, with Scotland significantly out-performing other parts of the UK. The UK was thirteenth in a European league table of wind power per head of population, trailing behind tiny Estonia and only just ahead of Belgium. The three countries at the top of the league table were Germany, where wind met 15% of demand, Spain, where it accounted for 20%, and Denmark, where it met 29% of demand.

After looking at the ways in which those countries had facilitated onshore wind through their planning systems, and drawing on good practice from the countries of the UK, the report drew up conclusions on how to protect wildlife and deliver wind power on a large scale.

Ruth Davis head of Climate Change Policy at the RSPB, said: “The need for renewable energy could not be more urgent. Left unchecked, climate change threatens many species with extinction. Yet, that sense of urgency is not translating into action on the ground to harness the abundant wind energy around us. The solutions are largely common sense. We need a clear lead from government on where wind farms should be built and clear guidance for local councils on how to deal with applications. We must reduce the many needless delays that beset wind farm developments. This report shows that if we get it right, the UK can produce huge amounts of clean energy without time-consuming conflicts and harm to our wildlife. Get it wrong and people may reject wind power. That would be disastrous.”

David Baldock, Director of the IEEP, said: “The development of renewable energy in Britain has to accelerate greatly if new binding targets are to be met. This means that the UK’s planning systems must facilitate a step change in the construction of wind power. The best experience elsewhere shows that this is possible. Damage to birds and other wildlife can be minimised by a strong or proactive approach — guiding turbines to the right sites. Good planning can facilitate development appropriate for the long term”