RSPB Scotland is calling on the Scottish Government to move quickly to introduce the licensing of grouse shooting, following the disappearance of two more satellite-tagged Hen Harriers on moors in the Cairngorms National Park.

Marlin, a young male, fledged from a nest at the National Trust for Scotland's Mar Lodge Estate in Aberdeenshire in 2018, while Hoolie, another male, came from a nest in Easter Ross in the same year.

Before they left their nests, both birds were fitted with a satellite tags as part of the EU Hen Harrier LIFE project, which have allowed experts to track their movements since then. Marlin flew south after fledging and has spent the last two winters in North Yorkshire. 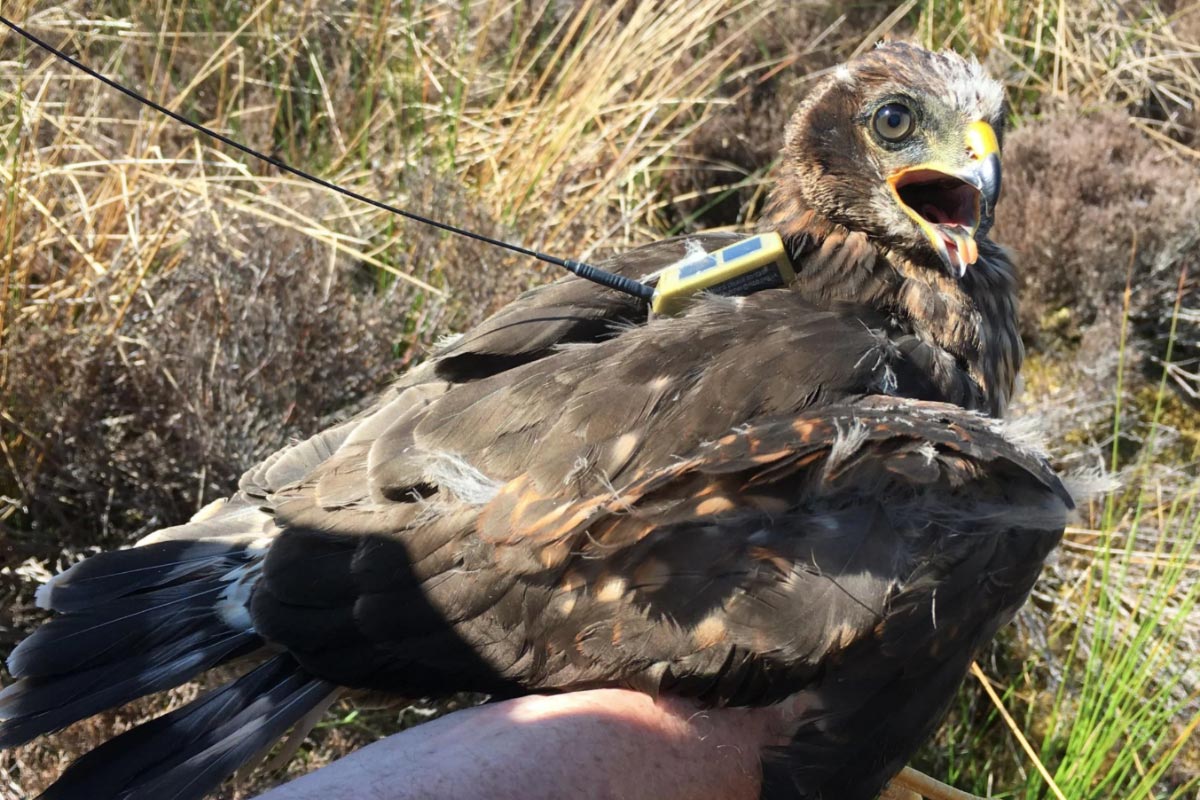 Hoolie, pictured above, is one of two satellite-tagged Hen Harriers to suddenly and mysteriously disappear over Scottish grouse moors this spring (RSPB Scotland).

Hoolie crossed the sea to Ireland, returning there for the last two winters, where his movements have been closely followed by Irish ornithologists.

In March 2020 Hoolie returned to Scotland, most likely with a view to finding a mate and raising chicks of his own. However, a month later his tag suddenly stopped transmitting. His last transmitted location was on 5 April and showed he was over an area of moorland intensively managed for grouse shooting near Newtonmore, in the Cairngorms National Park. He disappeared close to where another tagged Hen Harrier, named Lad, was found dead, with injuries consistent with being shot, in 2015.

Just three days later, on 8 April, Marlin's tag also stopped suddenly. He too had returned to Scotland, and his last transmitted position was over a driven grouse moor near Strathdon, West Aberdeenshire, in the Cairngorms National Park. Last April, another Mar Lodge Hen Harrier, Marci, also disappeared suspiciously, less than a kilometre away, on the same grouse moor.

When a tagged Hen Harrier dies of natural causes the tag continues to transmit its location, allowing for the body to be recovered. Police Scotland carried out searches for the birds but neither the tags or the bodies were found, and neither tag has transmitted further data.

Ian Thomson, RSPB Scotland's Head of Investigations, said: "Scotland had only just been put into lockdown in early April and yet protected birds of prey equipped with highly reliable technology have disappeared on land managed for driven grouse moors. The fact that these two birds have disappeared very close to where other similar incidents have occurred only heightens suspicions that these birds can be added to the very long list of protected birds of prey killed on grouse moors.

"The Scottish Government's independent review of grouse moor management, published at the end of last year accepted the need for regulation of grouse shooting but proposed a five year probationary period to allow populations of Hen Harriers and other birds of prey on or near grouse shooting estates to recover to a 'favourable' conservation status. We believe that this approach is unworkable in practice and urge the introduction of a licensing scheme as soon as possible."

However, both estates involved accused the RSPB in trying to make 'political capital' over the respective incidents. The Newtonmore estate said a recently retired senior police officer had already investigated the disappearances and concluded there was no wrongdoing. The second estate, near Strathdon, said officers had already conducted a search with the head gamekeeper and they were "satisfied" with the cooperation provided.