Two young Golden Eagles have disappeared within a few hours of each other on the same grouse moor.

The birds – both satellite-tagged and named Adam and Charlie – vanished from the Auchnafree Estate in the Strathbraan area of Perthshire on the morning of 18 April 2019.

Both the eagles were being monitored by Chris Packham and Dr Ruth Tingay as part of a wider study in to the movements of young Golden Eagles in Scotland. The eagles’ satellite tags, which had been working fine for one and two years respectively, inexplicably stopped working some five hours apart on the morning of 18th, merely 3.4 km away from each other. 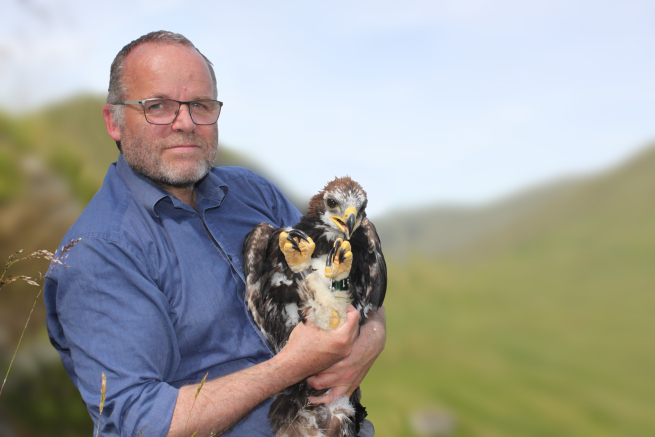 Since then, neither the tags nor the eagles have been traceable. Police have since headed up a search of the last known locations on the grouse moor, though there was no sign of either bird.

Both Adam and Charlie had hatched at separate nests in the Loch Lomond & Trossachs National Park in 2018 and 2017 respectively.

The circumstances of their disappearances, in a region previously identified as a raptor persecution hotspot, are virtually identical to the suspicious disappearances of more than 50 satellite-tagged eagles in Scotland, as revealed in a Government-commissioned report published in 2017. In response to that report's findings, the Cabinet Secretary ordered a review of grouse moor management practices with a view to introducing a licensing scheme for game-shooting estates. The review is due to be published this summer.

Andy Wightman, Scottish Parliament’s Species Champion for Golden Eagle and MSP, said: "I am shocked and devastated by the disappearance of Adam, a young Golden Eagle, whom I spent time with when he was nine weeks old. The cold rage that I felt when I heard of the circumstances of his disappearance has now developed into a determination to discover his fate.

"This latest outrage should be a wake-up call to the Scottish Government that for all their reviews, inquiries and reforms, rampant criminality remains in place across many of Scotland’s driven grouse moors."

Chris Packham added: "We can't prove that harm has come to Adam and Charlie, nor who might have been responsible, but we can look at the circumstances, look at the science, look at the wider evidence and draw plausible conclusions. The Scottish Government has already acknowledged that illegal raptor persecution is an ongoing problem. How many more Golden Eagles do we have to lose before that same Government takes effective action?"