Results from the latest national European Turtle Dove survey, conducted in summer 2021, found that there may be as few as 2,100 pairs left in the UK.

European Turtle Dove, known for its distincting 'purring' song, is Europe's only long-distance migratory dove and spends the winter in Africa, despite being synymous with Christmas due to featuring in the song Twelve Days of Christmas.

Research shows that the decline of turtle doves is being driven by two main factors: the loss of suitable habitat on its breeding grounds and unsustainable levels of hunting on migration through south-west Europe.

Although the results are sobering, there is hope for this summer resident. Identifying factors driving the decline have helped pinpoint the solutions. This includes working with farmers, landowners and volunteers who play a key role in supporting turtle doves in the UK. 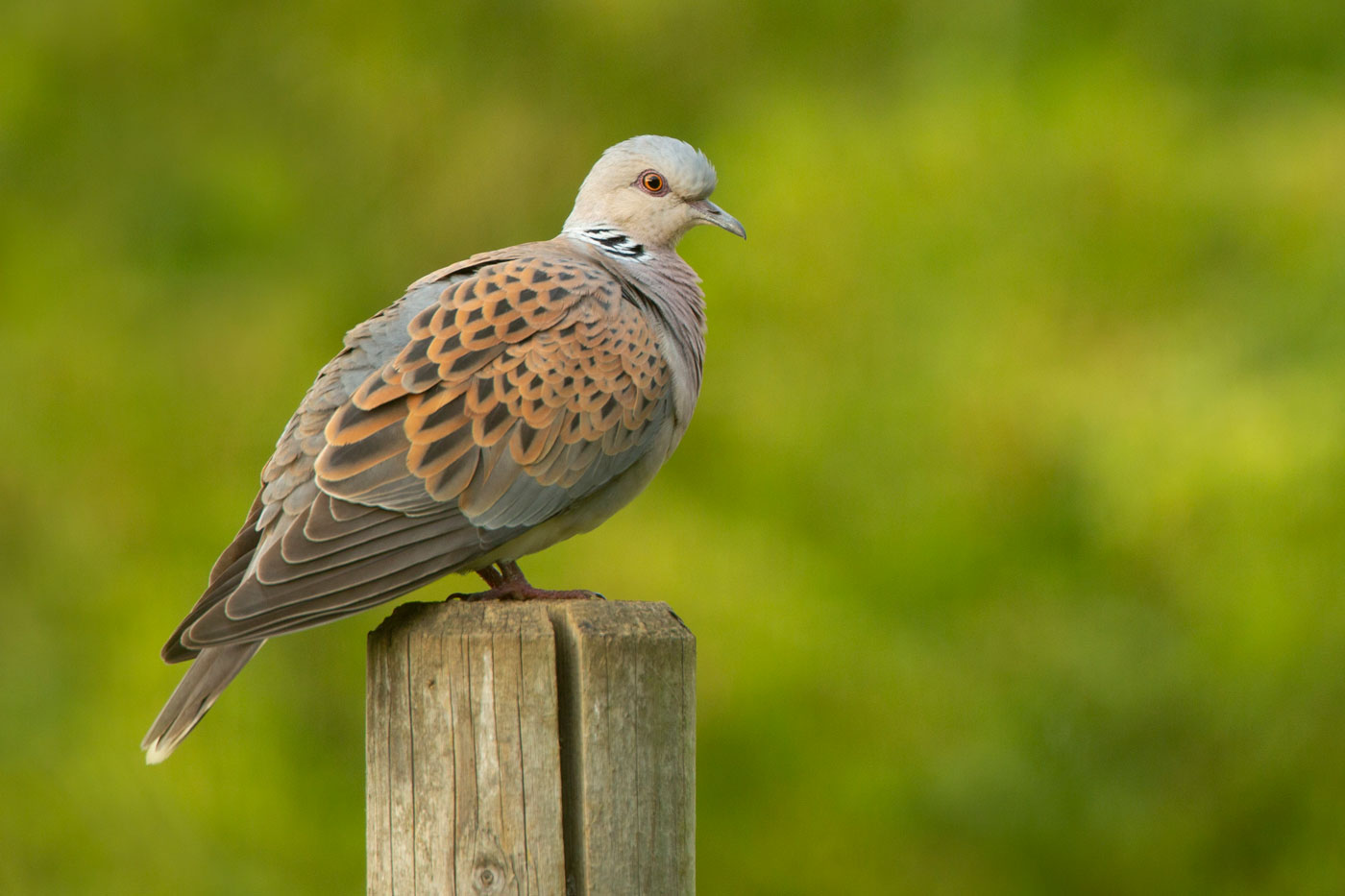 European Turtle Dove has declined by 98% in the UK since the 1970s (Ben Andrew / www.rspb-images.co.uk).

Operation Turtle Dove is a partnership between the RSPB, Fair to Nature, Pensthorpe Conservation Trust and Natural England that aims to reverse the decline in this beloved farmland bird. The project is driving forward the restoration and creation of turtle dove breeding habitat, which holds the key to securing a future for turtle doves in the UK. A team of advisors is on hand to provide guidance to land managers on creating turtle dove habitat and providing supplementary feeding.

Turtle doves are now concentrated in south-eastern and eastern England, with small populations as far north as Yorkshire. Providing the correct habitat is critical to ensuring this species success. It is imperative that the new agri-environment schemes in England continue to support farmers who implement wildlife-friendly measures on their land. Without this funding, current turtle dove conservation efforts may be severely compromised.

Turtle doves are also threatened from unsustainable hunting practices. In south-west Europe alone, about 1 million birds were estimated to be shot each year until recently. However, no hunting of turtle doves was permitted in France, Spain or Portugal for the first time in 2021. The RSPB played a pivotal role in developing the science, species action planning, and international policy work, that led to the hunting ban, and calls for a sustainable long-term management system that will allow the recovery of the species on a continental scale.

Andrew Stanbury, Conservation Scientist at the RSPB, said: "In the 1970s, there were records of flocks of over 500 birds, and the UK population was estimated at 125,000 pairs. Although these results paint a stark picture with numbers, the way forward is clear and we stand a good chance of turning around the fortunes of this bird. We hope that the 2021 survey will represent the lowest population point."

Phil Grice, Principal Specialist for Ornithology at Natural England said: "The fact that no hunting is currently permitted on the western European flyway provides us with a huge window of opportunity to reverse the decline in arguably one of England's most threatened bird species. Providing good nesting habitat (in the form of tall hedges and mature scrub) and abundant seed resources throughout the late spring and summer will be vital, both of which can be delivered through a well-planned and delivered Countryside Stewardship agreement."

The 2021 National Turtle Dove Survey was a partnership project coordinated by the RSPB, Rare Breeding Birds Panel and Kent Ornithological Society, with support from British Trust for Ornithology (BTO). The turtle dove survey is part of 'Action for Birds in England', a conservation partnership between Natural England and the RSPB.

Effective ways that the general public can help turtle doves in the UK include reporting sightings via BirdTrack, volunteering to take part in surveys and supporting the work of the RSPB and Operation Turtle Dove partners.