The hunters may slaughter as many as 100 Puffins in one shoot before reportedly bringing some of the dead birds back as prizes, prompting activists and MPs to demand an importation ban. Since 2015, Puffin has been listed as Vulnerable by the International Union for Conservation of Nature, with a wretched decline in both the UK and Iceland. In the latter country, numbers have dropped by some 1.5 million in recent years while, in the UK, Puffins are Red-listed.

Some of the birds hunted in Iceland are served as food to curious tourists, with the species a long-standing part of Icelandic culture and cuisine. However, the recent trend in trophy hunters travelling to kill the birds in the name of sport is alarming given the huge observed population declines, even though the hunting of Puffins is both legal and regulated in Iceland. 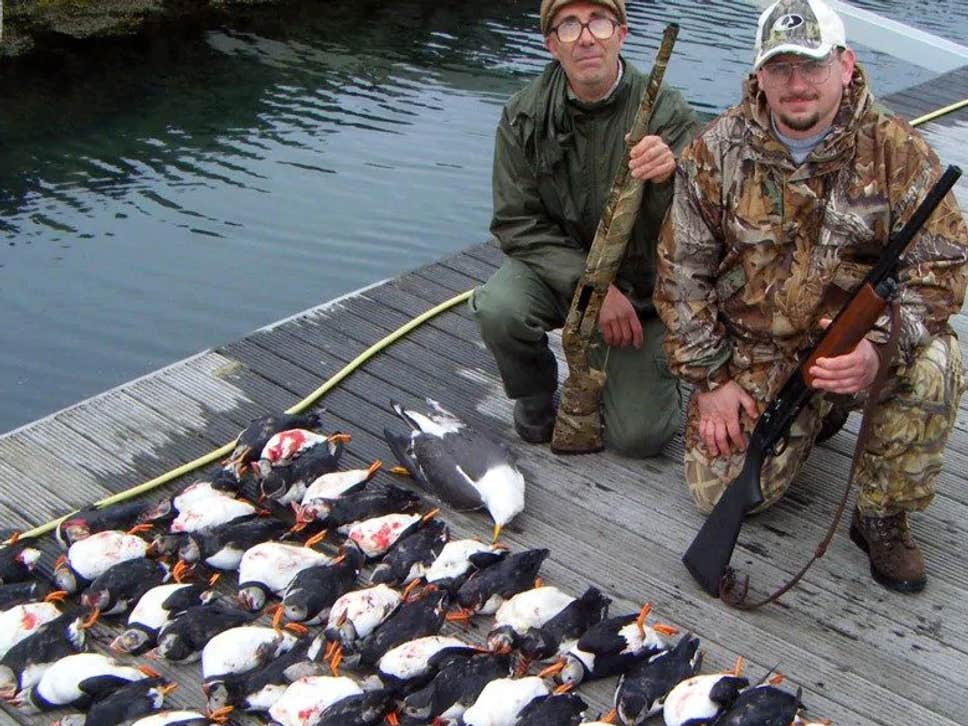 Puffins are being shot by trophy hunters in their hundreds in Iceland (Campaign to Ban Trophy Hunting).

It was initially reported by Campaign to Ban Trophy Hunting that British nationals were among those travelling to Iceland to shoot Puffins. However, further investigation suggests that while the opportunity exists for hunters from any nation to travel to Iceland to shoot Puffins and other species, no licences have been issued to British individuals in the last three years to do so (although the practice does still take place).

Despite this, it would still be a good move to see the import of such trophies back into Britain banned and the new Environment Secretary, Theresa Villiers, is being urged to ban imports of Puffins and other species that may be killed in trophy hunts and push CITES, the international organisation which regulates animal trade, to list the seabirds for global protection.

Sir Roger Gales, chair of the Conservative Animal Welfare Foundation, told The Daily Telegraph: "Personally I regard the whole practice as abhorrent. I don't believe in trophy hunting at all for any species. I don't think there is any excuse for it. I believe there is much more tourism to be generated by preservation and conservation rather than by killing Puffins."

A spokesperson for the Department for Environment, Farming and Rural Affairs said: "Puffins are one of the nation's most iconic seabirds and, as with all wildlife, their protection is a high priority for this Government. We take the conservation of species seriously and work with organisations such as CITES to agree tough global guidelines to protect animals at risk."