Four Spoon-billed Sandpipers were found at Fucheng, near Leizhou, in southwest Guangdong Province (China) in December 2012. Together with several other recent sightings, this record indicates that Spoon-billed Sandpiper is a more widespread wintering species on the coast of southern China than was previously known. However, evidence was found of large-scale trapping of shorebirds and action is needed to address this threat. 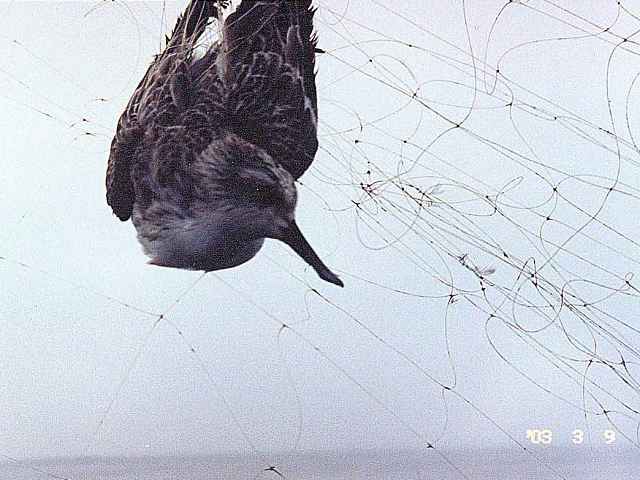 In 2003, a Spoon-billed Sandpiper was found caught in a hunter's net (Fasheng Zou).

One of the three Spoon-billed Sandpipers recorded at Zhanjiang in 2003 was caught in a bird trapper's net. Since then the problem of trapping appears to have become even worse and illegal bird-netting now poses a major threat to Spoon-billed Sandpiper and other shorebirds. The team counted a total of 460 mistnets during the survey — these were typically 25m long and 3m high, meaning that the nets counted equated to a length of 11.5km. The nets were placed, often in parallel lines or V-shapes, beside shorebird roost-sites on fishponds, saltpans and sandbars on the coast, as well as in nearby paddyfields and marshes. The shorebird trapping found during the survey has been reported to Guangdong Forestry Department, which is responsible for the protection of wildlife. Discussions are underway amongst Chinese birdwatchers and conservationists about how to support the local government agencies to address the trapping of Spoon-billed Sandpiper and other migratory birds (and other forms of illegal hunting) at the key sites for these birds. The project "Study of the non-breeding distribution of Spoon-billed Sandpiper in Southern China" is being managed by The Hong Kong Bird Watching Society and supported by Ocean Park Conservation Foundation, Hong Kong. It is being implemented in partnership with Fujian Bird Watching Society, Xiamen Bird Watching Society, Beilun Estuary National Nature Reserve and Kadoorie Conservation China of Kadoorie Farm and Botanic Garden.