The biggest ever nationwide count of butterflies and day-flying moths has already revealed an amazing finding: the Jersey Tiger is prowling the back gardens of London. The Jersey Tiger, a stunning day-flying moth normally only spotted on the south coast, has been recorded in London this week by members of the public taking part in the big butterfly count. The survey is being run by the charity Butterfly Conservation in partnership with Marks & Spencer in order to track our dwindling butterfly and moth populations. 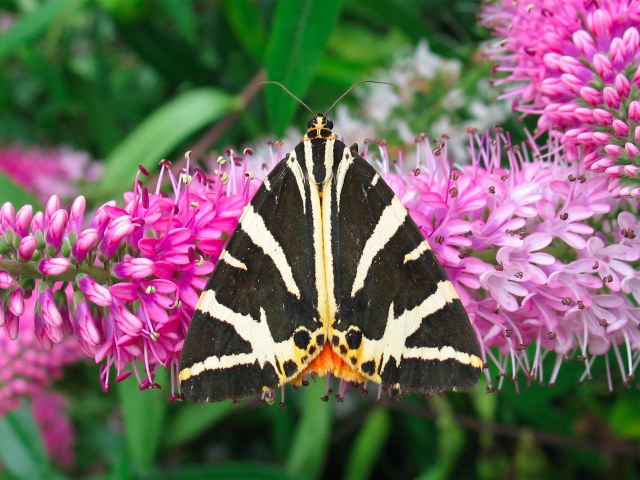 This is a scarce moth that occurs in south Devon as well as in the Channel Islands. More recently, it has established colonies along the south coast of England, such as in Sussex and on the Isle of Wight. Scientists believe that the moth is moving north and colonising Britain due to climate change.

In recent years this spectacular creature has been spotted in Forest Hill, south London, much to the surprise of experts. However, big butterfly counters have noticed a substantial increase in the last few days. Jersey Tigers have been reported much more widely in the south London suburbs from Thornton Heath right up to Kennington, just a few streets away from The Oval cricket ground and a stone's throw from the River: further evidence that the moth is spreading its wings and establishing itself further north.

Another unusual observation among the 20,000 sightings sent into the big butterfly count since last Saturday is the stunning Camberwell Beauty butterfly. Although named after the area of London where the first one was reported in Britain, in 1748, this is a rare migrant to the British Isles that originates in Scandinavia and central Europe. On average only a handful of Camberwell Beauties are seen in Britain each year. A big butterfly count participant was lucky enough to spot one near Cobham, Surrey on Sunday.

Butterfly Conservation and M&S are urging the public to continue sending sightings of both common and rare species this weekend before the count ends. Butterflies and moths are sensitive indicators and the results will help gauge the health of our townscapes and countryside.

Richard Fox, Surveys Manager of Butterfly Conservation, said: "There has been a fantastic response to this first ever big butterfly count, with nearly 7,000 counts undertaken so far this week by members of the public across the UK, from St Ives to Inverness. There have been some amazing sightings and very interesting trends are emerging. Nevertheless, there are still many gaps in our nationwide picture. The count continues this weekend and if everyone could spend just 15 minutes, in the sunshine, enjoying butterflies in their garden, local park or countryside, we could really make this the biggest count ever."