While the population has not shown any signs of a sustained recovery in recent years, a 15 per cent increase in the total counted between 2016 and 2017 had been a promising sign. Unfortunately, it seems likely that poor northbound feeding conditions in Delaware Bay, USA, in May 2017 resulted in a lower survival rate, with the result that the population crashed. For context, there were 50,000 Red Knot in Tierre del Fuego as recently as the year 2000.

A flock of Red Knot as seen during the aerial survey on Tierra del Fuego (Antonio Larrea).

In 2018, nearly all the Red Knot counted were found in Bahía Lomas, Chile. Bahía Lomas became a Western Hemisphere Shorebird Reserve Network (WHSRN) site of Hemispheric Importance in 2009, primarily for its unparalleled importance for the New World rufa subspecies of Red Knot. Virtually all (98.7 per cent) of the birds counted in the 2018 survey occurred in Tierra del Fuego, which has been the case since 2011. At the other major historical wintering area at Río Grande, Argentina, the count improved slightly from the all-time low of 27 in 2017, with 130 birds recorded. As recently as 2008, counts at Río Grande were in the range of 3,500 to 5,000, but have fallen drastically since then. No Red Knot were recorded in Bahía San Sebastian amongst the much larger numbers of Hudsonian Godwits. The concentration of nearly all Red Knot in one location (Bahía Lomas) in one major flock makes them particularly vulnerable to any environmental problems that might occur locally.

Delaware Bay plays a key role in the annual cycle of Red Knot, as it is the last stop-over on northward spring migration before the flight to Arctic breeding grounds. It is here that the birds must acquire sufficient body reserves not only for the flight to the Arctic, but also to enable them to breed successfully once they arrive. Knots departing Delaware Bay in sub-optimal condition suffer lower survival, as shown by research in the early 2000s when the major food resource of Horseshoe Crab eggs were severely depleted; many birds could not reach adequate departure weights, resulting in reduced survival and the rapid population crash observed in those years. In May 2017, low-water temperatures in Delaware Bay caused a delay in Horseshoe Crabs coming ashore to lay their eggs, in turn lowering availability of their eggs to migrating shorebirds. As a result, many knots departed Delaware Bay at lower than optimal weight levels, similar to those of the early 2000s when the population also crashed. 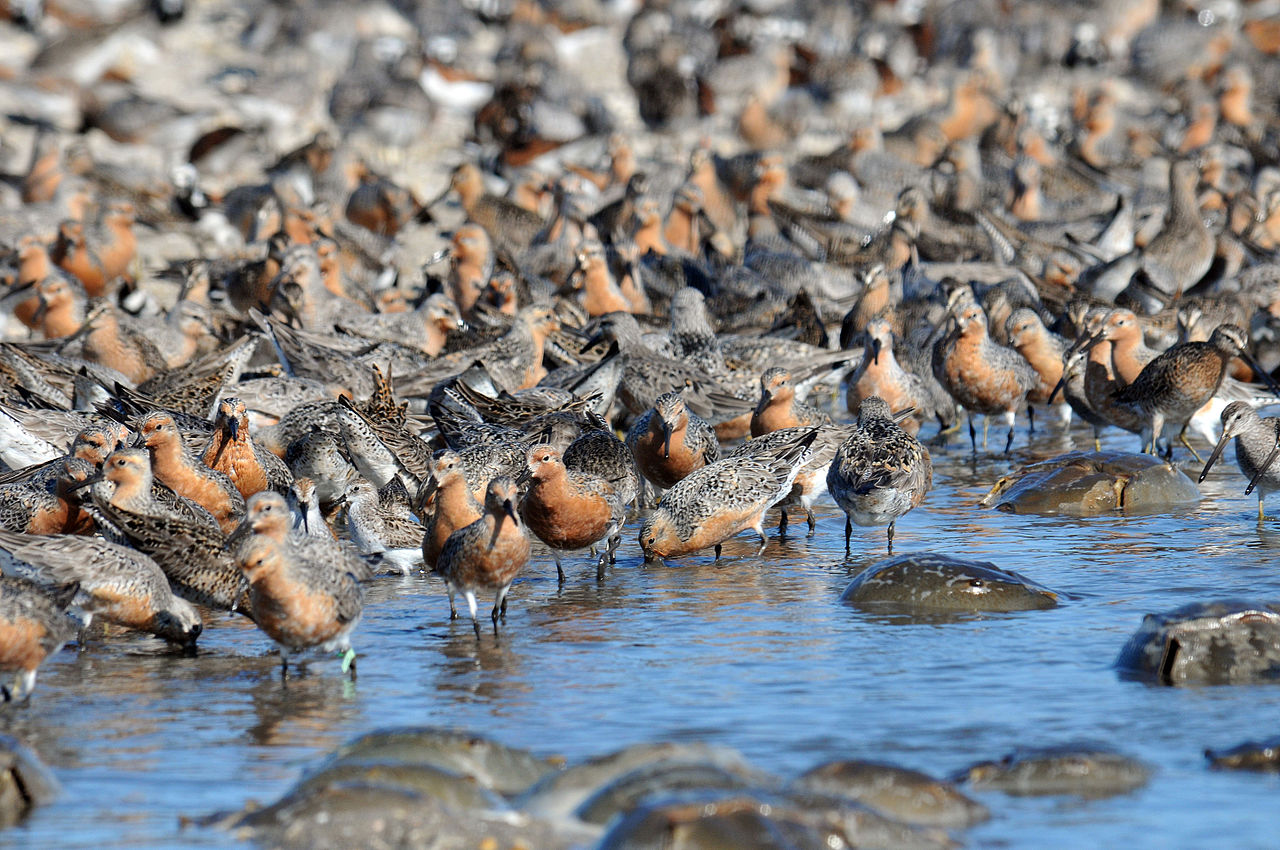