The strange case of the disappearing duck

An RSPB Scotland research project has been uncovering the reasons why Britain's breeding Common Scoters are disappearing.

Common Scoter is a rare breeding species that has been dwindling in numbers in Britain, but researchers could not pinpoint why. There are plenty of suitable habitats for this species in Scotland, but they are only found at a few locations in the Scottish Highlands, including the Flow Country of Caithness and Sutherland and at several lochs in Inverness-shire.

Concern among conservationists that this species may become extirpated in Britain prompted a three-year research project by the RSPB's Centre for Conservation Science. The team now believes that a solution to the birds' recovery might be found by restoring the balance between fish and invertebrates in the species' habitat, and in some cases angling could be one way to help restore the scoter population. 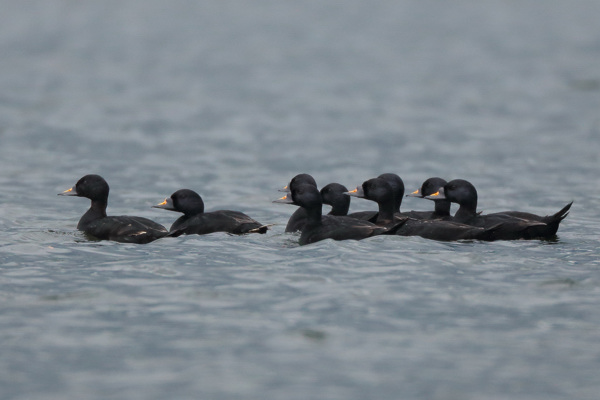 Dr Mark Hancock from the RSPB's Centre for Conservation Science said: "Of all the lochs we investigated during this work, scoters bred most often at those with the shallowest water and the greatest number of large, freshwater invertebrates. It soon became clear that there were more insects where there were fewer Brown Trout, so it looks like scoters are being limited by a lack of food in places where the fish are eating it all."

"We're now using these results to design new ways of helping scoters. For example, in areas of the north Highlands where angling activity has dropped off and fish numbers have increased, more trout angling is potentially one way to boost freshwater insect life. At 'hydro lochs' where water levels are to some extent under human control, we could also aim to maximise the area of shallow water."

The Common Scoter project was supported by Scottish Natural Heritage (SNH), the Wildfowl and Wetlands Trust (WWT) and The Conservation Volunteers (TCV).

Dr Andy Douse of Scottish Natural Heritage, a co-author of the study, said: "Scotland is the only part of the UK to have breeding scoters, many of which nest in legally protected nature conservation sites. This study highlights promising management options for restoring populations of this declining species."

Hannah Robson of the Wildlife and Wetlands Trust, another co-author, said: "Scoters are amazing birds: an Arctic species finding a haven in remote Scottish lochs. This research points to the ways in which we might be able to save them."