The sociable garden in autumn

Nature's Grand Hotel has its Season, like the others. As the guests one by one pack, pay, and depart, and the seats at the table d'hote shrink pitifully at each succeeding meal; as suites of rooms are closed, carpets taken up, and waiters sent away; those boarders who are staying on, en pension, until the next year's full reopening, cannot help being somewhat affected by all these flittings and farewells, this eager discussion of plans, routes, and fresh quarters, this daily shrinkage in the stream of comradeship. One gets unsettled, depressed, and inclined to be querulous.

Poor Ratty — he obviously wasn't a gardener. Autumn is my favourite season, partly because I'm keen on my cider and perry, jams and jellies. It's partly also because it's the time to plant and sow, and not just for our own benefit.

This is the perfect moment to sow native wildflower and grass mixes. The seed of some of our native plants needs to chill over the winter before germinating, so an autumn sowing is preferable to spring, particularly as springs seem to have been so dry recently.

Why start a meadow? Most of our unimproved grassland — over 97% — has disappeared. That's a tragedy — not just for us, but also for the myriad animal species associated with them. Unimproved grassland is one of our richest native habitats, as well as one of the most beautiful. Meadows don't just work as giant nectar bars in the summer, but support a complicated ecosystem all year round. I know folk who have beautiful meadows that are made up of largely non-native species. They are nectar-rich, possibly, but useless for any of the animal species dependent on particular plants. No Kidney Vetch, no Small Blue. No Annual Meadow Grass, no Wall. These butterflies will not colonize areas where their larvae have no food plants, and the food plants of British butterflies are British plants. Nectar is not the complete answer. Establish and manage the right plants properly and your insect and bird populations thrive. We've got a tussocky area for voles too, and, hey presto — Barn Owls. 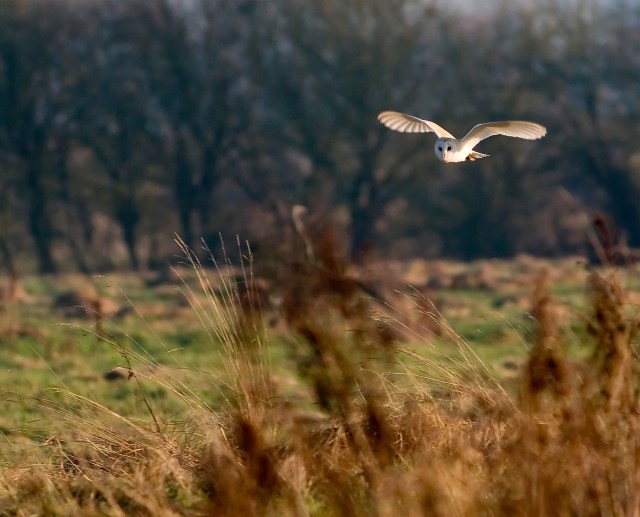 'The right plants' also means local plants. It's difficult to find really locally appropriate mixes commercially, but you might be lucky. If not, you will be able to find a generic mix for your soil type or requirement, but do make sure it is from a reputable supplier and signatory of the Flora Locale code of practice. Local species will obligingly appear over time as well, of course.

You won't be able to create a 500-year-old hay meadow overnight, but even a small "micromeadow" in your back garden will make a difference. And, contrary to popular belief, it's relatively easy to start and maintain a meadow area. If you prepare properly and establish an annual regime you'll be surprised how simple it is. As ever, "wildlife gardening" doesn't mean "go wild". Brambles, nettles, thistles and dock are as much a nuisance in a meadow as they are in a formal garden area. My in-laws, very good gardeners, had a "wildlife" area that looked more like a biohazard. We had a council of war and decided what they thought was a wildflower and what was a weed. It now gives them as much pleasure for its flora as for the fauna it has attracted. 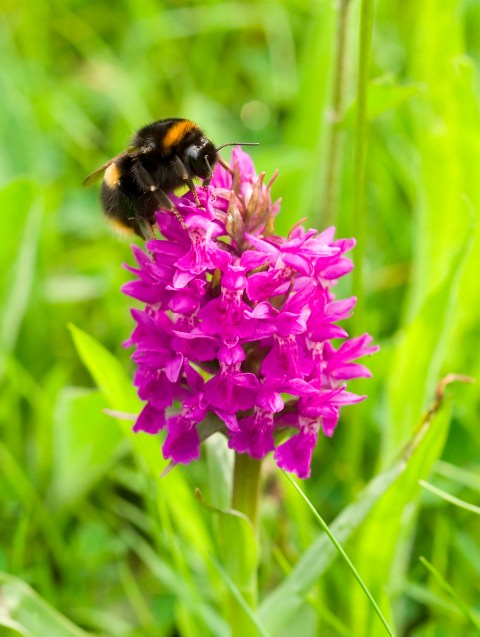 I ought to talk about native berrying plants as well — the emphasis on native again. You can make a really good alternative to the woodland edge in your garden by planting a mixed hedge. Wildlife corridor, good nest sites, hedgerows in decline — you know the story, I'm sure. It's the perfect time of year to plant these chaps too. Bare root plants have a much better chance of establishing themselves and, again, the dry springs we've had recently mean that autumn is the better planting season.

Here too there's a happy coincidence; what's good for the birds is in many instances good for us. John Wright has written the latest of several good books on hedgerow cooking, and we mostly follow fellow River Cottager "Pam the Jam" Corbin. At this time of year we're always knee deep in jams and jellies, chutneys and cheeses and, of course, the dreaded sloe gin. We've recently processed an industrial 15 kg of sloes, so popular is the final product with our friends as a Christmas present. A woman came up to me in Waitrose as I loaded several tonnes of sugar into my trolley and asked me conspiratorially if I knew about an impending shortage.

Anyway, which are my favourite native plants for human and avian consumption? We have roses in any hedgerow we plant, and not just for their hips (jelly and tea). Simple, single-flowered species are good for nectar too. Blackthorn is, as you've probably gathered, a particular favourite, and its spiny habit means it's a good nesting place too. Hawthorn is quicker-growing and less spiky but much more common, and I don't much go for Hawthorn Berry wine. Crab Apples are a decorative choice as a small tree (as are Cherry Plums) and their fruit, with its high pectin levels, is very helpful in the kitchen. If you've a little more space there is Bird Cherry and Wild Cherry; I've recently planted a Mazzard — an ancient variety of Wild Cherry that can be eaten off the tree by humans. Rowan will make a jelly, but is more popular among Chaffinches than humans. 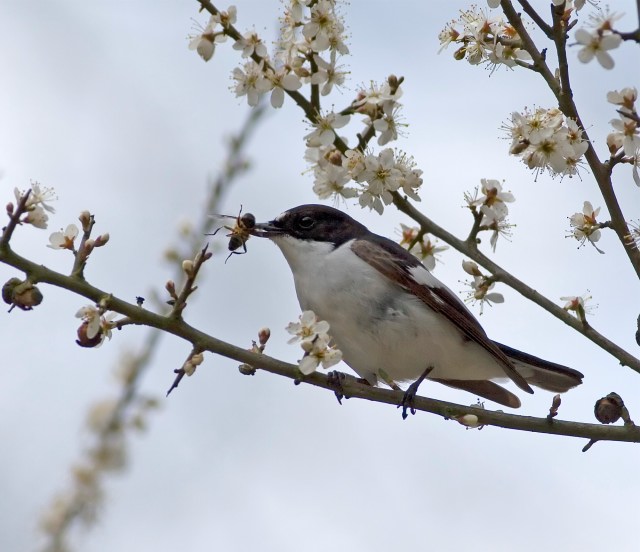 Elder flowers and berries are, of course, a culinary delight, but the trees need to be sited carefully as they tend to take over. On my hedge-laying course I was told to cut them out of the hedge line, as you do brambles; they are helpful in their place, although a friend's notion of a butterfly-friendly "bramblearium" seems a bit excessive unless you've got space and relaxed aesthetics. 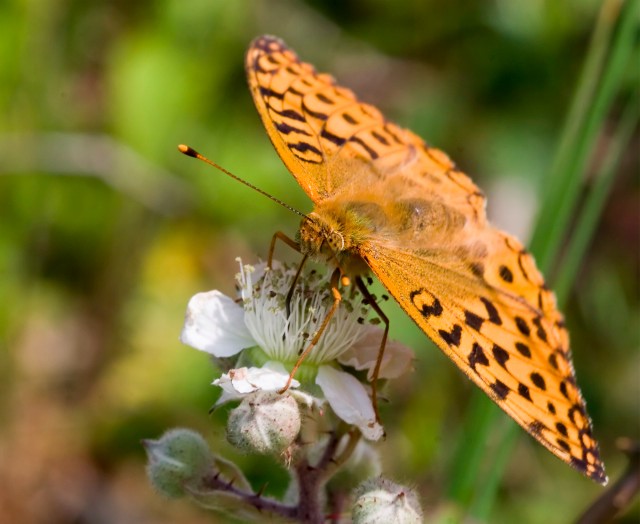 The berries of the Sea-buckthorn were a Neolithic staple but, unless you're Ray Mears, to my mind they're more useful for Fieldfares and other thrushes than humans. I don't think I would personally cook with Juniper berries either, which are an arbortifacient, although I'm very keen to see more Juniper trees planted. They're in sharp decline at the moment, and provide a good habitat for a range of insect and bird species. I'm not sure there are any culinary uses for Guelder Rose berries or Alder Buckthorn berries, but they are attractive and useful berrying shrubs. Dayglo Spindleberry and Purging Buckthorn berry are — guess what — strong purgatives, and Wild Privet berries are poisonous to us but attractive to birds, especially apparently thrushes, and as a semi-evergreen provides helpful cover. 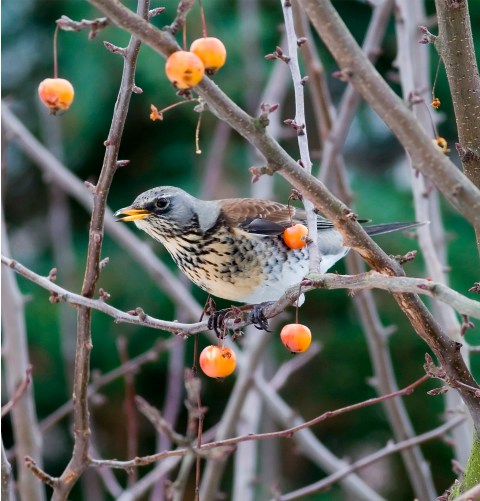 Although these are typically hedgerow species you don't have to grow them as a hedge if you don't have room for one. Try planting natives in a formal area, preferably in a small group. You can keep them tidy by clipping them if you like (at the right times of year). And when you plant, sow a suitable mix of wildflowers around them too.

...Rat was absorbed and deaf to the world; alternately scribbling and sucking the top of his pencil. It is true that he sucked a good deal more than he scribbled; but it was joy to the Mole to know that the cure had at least begun.

Wind in the Willows, Chapter 9