The mysteries of the 'African Galápagos' uncovered

BirdLife International conservationists have braved the mountainous landscape of São Tomé Island in the first-ever comprehensive survey of three elusive endemic bird species. However, their findings also highlight the urgent need for better management of the island's natural park.

The island of São Tomé, off the west coast of central Africa, is sometimes referred to as the ‘African Galápagos’. It has a remarkable level of endemism for such a small island: 17 of its 50 bird species are restricted to that island alone. It is also unusual in that it has no recorded human-driven bird extinctions, as yet. 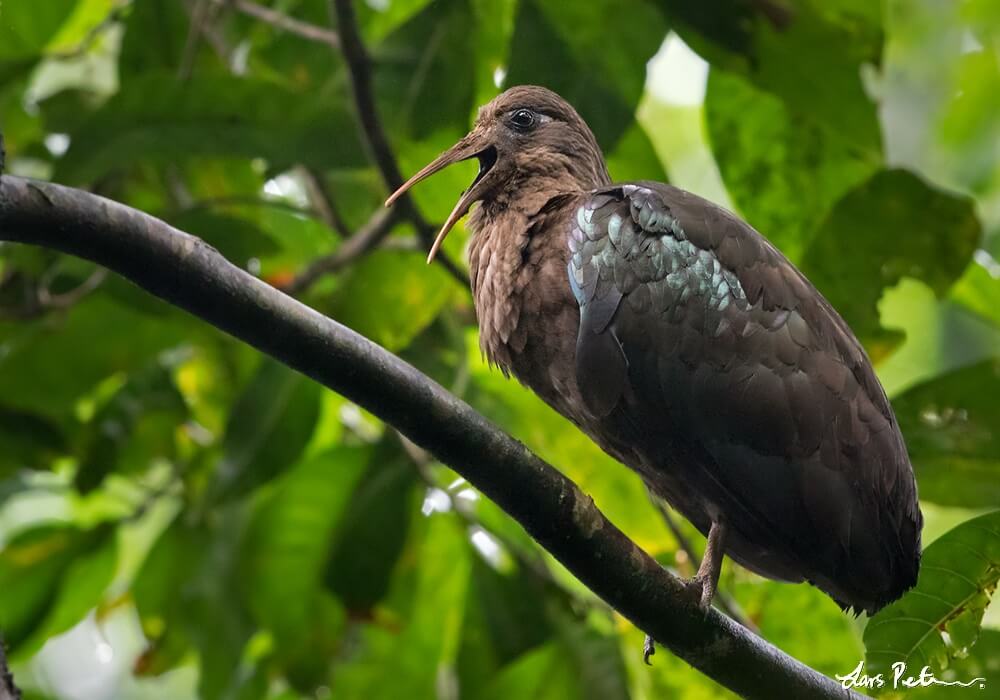 The endemic Dwarf Olive Ibis is under threat from hunting (Lars Petersson).

The island’s rugged landscape has protected its bird population from human interference, but this has proved a double-edged sword, making it difficult to survey the island. However, it does need to be assessed as species can’t be saved unless it is known where they live, what habitats they prefer, what’s threatening them and how many of them there are.

Of the island’s 17 endemic bird species, nine are classified as globally threatened, with three listed as Critically Endangered on the IUCN Red List: Newton’s Fiscal, São Tomé Grosbeak and Dwarf Olive Ibis. These three species formed the focus of a new study to discover more about the secretive wildlife found in the forests of the island.

Prior to the survey, Newton’s Fiscal and São Tomé Grosbeak were assumed to have populations of fewer than 50 individuals. The fiscal in particular was only rarely seen; often, only its distant calls revealed that it was still present. Dwarf Olive Ibis fares somewhat better in terms of population size but loses out by being the only one of the three species targeted by human hunters.

The hunters aren’t the only problem. Most of São Tomé’s birds live in its forests, but these are being encroached on by human activities. Records show that the island used to be entirely covered in forest, but more than half of it has been cleared, mostly for crops such as cocoa, coffee and palm oil. Invasive species, such as feral pigs or the Quinine plant, have also irrevocably changed the landscape. São Tomé Obô Natural Park, the home of most of the island’s endemic species, offers protection from some of these threats, but not all.

In 2016, a team of conservationists, among whom were representatives from SPEA (BirdLife in Portugal) and the RSPB, set out to survey the island. The researchers faced a range of challenges including torrential rain, mountainous escarpments of up to 2,000 m and venomous snakes, which made the landscape very hard to traverse.

Ricardo de Lima, lead author of the survey, described the experience: “It was very intense. We had a large team on the ground, sometimes camping in the forest for over a week, carrying tents, food and equipment on our backs, and moving camp almost every night.”

The team's findings were revealing and unexpected, showing just how much scientists hadn’t known about the ecology of these species and of the forests as a whole. All three species were discovered in previously unknown areas, and São Tomé Grosbeak’s range was found to be more than twice the size previously assumed. However, the home ranges of Newton’s Fiscal and Dwarf Olive Ibis were only half the size estimated. 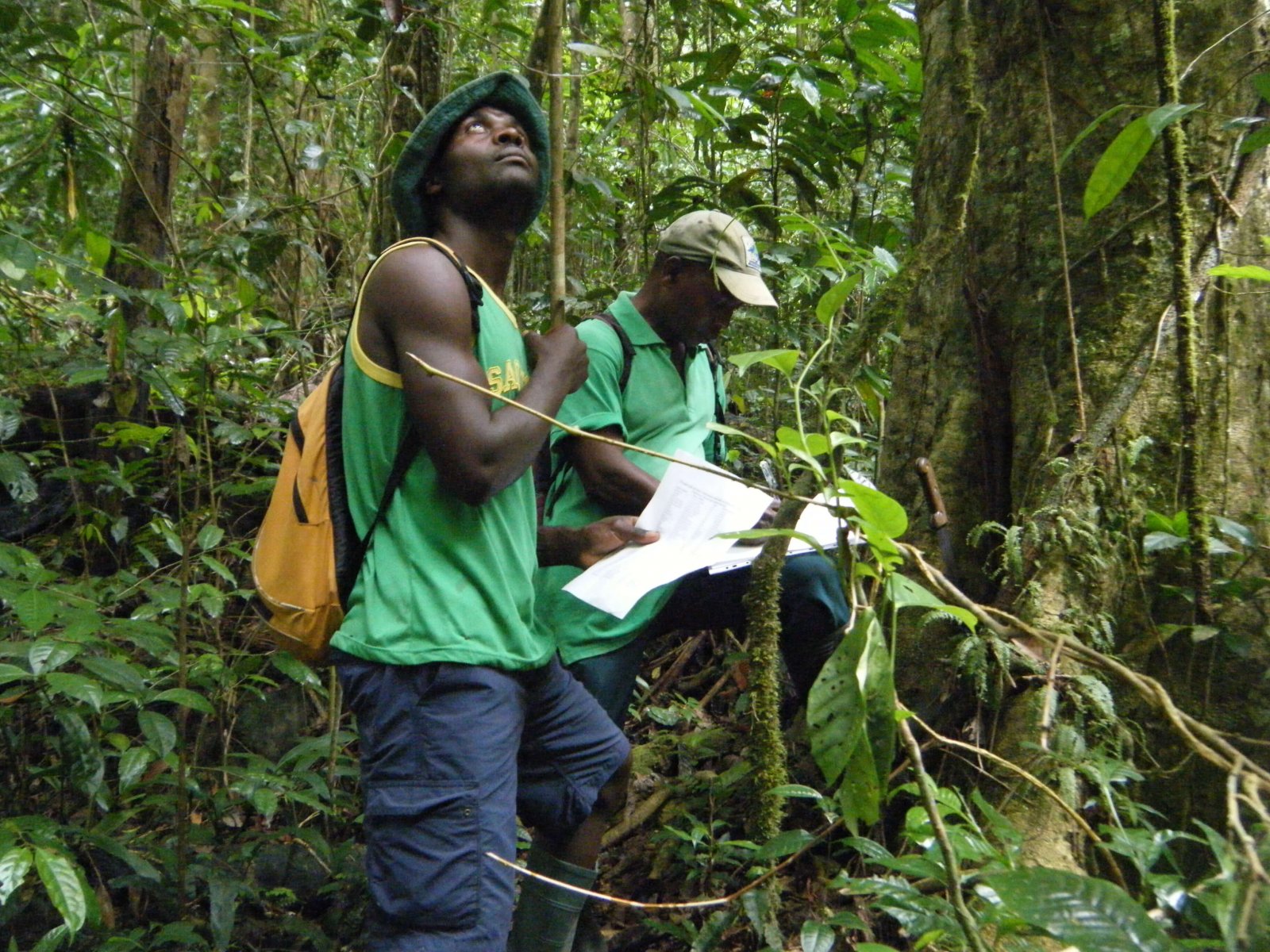 Local researchers explore the forests of São Tomé during the survey (BirdLife International).

Despite these restricted ranges, the population sizes of all three birds are most likely to be larger than assumed. Surveyors noticed that the sightings of São Tomé Grosbeak varied wildly between seasons, implying that the scarcity of records might be due to shyness rather than very low numbers. It is possible that Newton’s Fiscal and São Tomé Grosbeak may now be downlisted to Endangered in the near future. However, Dwarf Olive Ibis’s limited breeding range, coupled with the ongoing hunting pressure, means it will remain in the Critically Endangered category.

Overall, the three birds’ home ranges fell mainly within the São Tomé Obô Natural Park, meaning that conserving the park will also protect the birds. However, it isn’t there are complications. Dwarf Olive Ibis was found to concentrate around the south-west of the park which is one of the most accessible areas and is being targeted for development. An 18.6 square-mile palm oil plantation has recently been stablished, and the area is under even greater threat from a proposed dam. This means the ibis will be the conservation priority in the coming years. 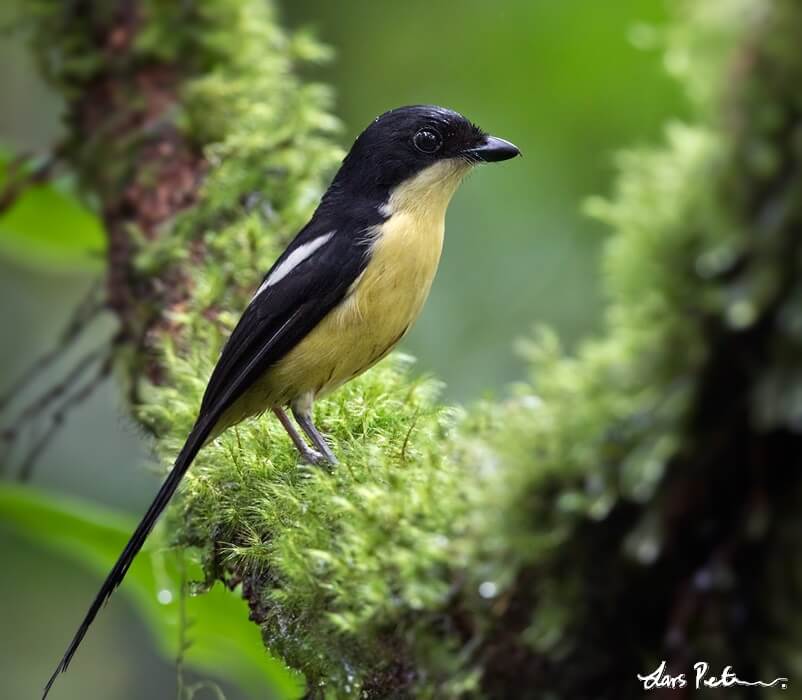 Newton's Fiscal is a limited-range and little-known shrike endemic to the island (Lars Petersson).

All three species were found to prefer native forest, and preserving this habitat is the best way to conserve the birds. Consequently, the next step of the study will be to determine how invasive species such as Mona Monkey, African Civet and Black Rat are impacting the three focal birds. Also, does the Quinine plant, for example, interfere with the birds’ hunting by obstructing the forest understory? In addition to invasive species, the impact of local communities collecting timber and charcoal also needs to be assessed.

One thing is sure: the future of these species and others depends on the natural park being managed effectively. But although the area is legally recognised, enforcement is currently weak due to staff and logistical limitations, and those need money.

“If this precious and unique biodiversity is to be protected, we need to focus on finding the funds for a rigorous enforcement and surveillance programme, to make sure the park’s restrictions are honoured,” added Ricardo.