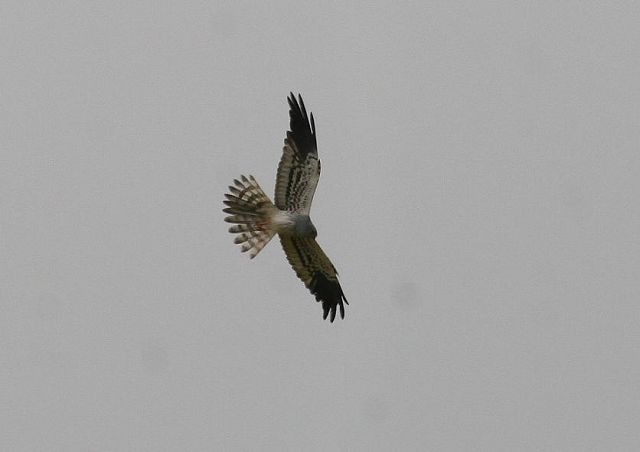 A pair of Montagu's Harriers, the UK's rarest breeding birds of prey, are nesting at Digby Fen between Lincoln and Boston. From Saturday June 23rd, seven days a week, the RSPB are running a viewpoint to help enable the public to see these incredible birds.

With fewer than 10 pairs nesting in the UK each year, Montagu's Harriers are 40 times rarer than Golden Eagles. They visit the UK to nest having spent the winter in sub-Saharan Africa. As Lincolnshire is right at the very north of their breeding range, the discovery of this nesting pair at Digby Fen is an exciting occurrence.

The Montagu's Harrier is a large and elegant bird of prey with a four- to five-foot wingspan. John Badley, Site Manager of nearby Frampton Marsh and Freiston Shore nature reserves, said, "The Montagu's Harrier hunts small birds, mammals and even amphibians or insects by quartering low across fields and using their keen eyesight and agility to pounce on or grab their prey. The viewpoint at Digby Fen is an exclusive chance to watch these birds in action."

The Digby male has been seen taking prey items to the nest, providing for the recently hatched chicks. This atypical behaviour caused some alarm to RSPB staff - the female would usually take prey from the male in a mid-air pass. The visits to the nest by the male coupled with no sign of the female prompted concerns about her wellbeing. Thankfully, however, she eventually made an appearance to reassure RSPB Harrier Protection Scheme staff that all was well, although perhaps she is rather lazy and content with her partner waiting on her wing and claw!

The RSPB viewpoint will be open from 9am until 7pm on weekdays, 8am until 8pm on weekends and public holidays from Saturday 23rd June 2007 until Monday 26th August. The viewpoint is free, but there is a suggested donation of £2 per vehicle to help cover the costs of running the project.

The viewpoint car park is mid way along the Digby Fen Road. The site will be signposted from the A17. Facilities include an RSPB information trailer, viewpoint with telescopes, RSPB staff and volunteers. Light snacks and drinks are available to purchase and toilet facilities are available for use. The viewpoint is located on private land. The RSPB is grateful to Mick Wood and Richard Wright who’s kind permission to use their land is greatly appreciated.