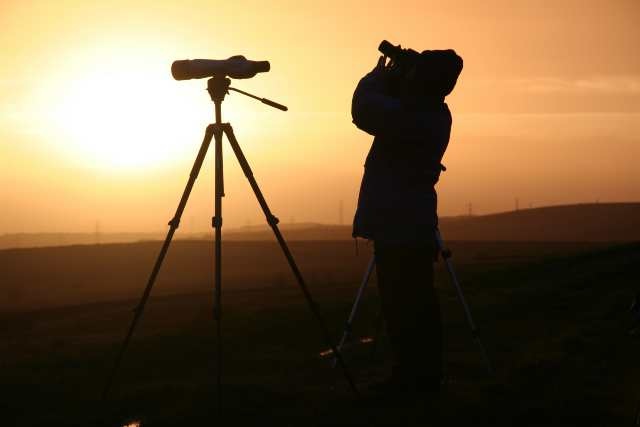 Ever fancied finding a good vantage point close to home and watching the skies to see which species of birds are on the move, how many and in which direction? There may well be much more up there than you think! On some days you will be totally overwhelmed by visible movement, each species moving in its own dedicated direction. No two days watching the sky are ever the same, with each species coming to prominence at its own time, in its own way and favoured conditions, the migration sometimes resulting from weather conditions in far distant climes. Half the fun is sussing out when the really BIG "vis" is likely to flow, then going out to see whether it is there as predicted.

Right now the UK Visible Migration Group is working up to this year's co-ordinated visible migration events. For those that haven't done it before: it's a series of coordinated events that allow you a one-off chance to analyse and compare the visible migration apparent at your watchpoint with many other sites up and down the country. All we need on the days is some reasonably uniform weather that allows us all to get out in the field. The dates have been chosen to avoid both the WeBS count days and to correspond with migratory flows of various target species.

Your watchpoint, whilst a vantage point, should not be too high. It should be topographically prominent to concentrate the moving birds, and should be as far away from background populations of any resident birds as you can get. Nevertheless, the more habitats it can concentrate bird flows over, the better. If in doubt as to how to choose your watchpoint, there is always help from a multitude of experienced observers on the UK Visible Migration Group. Perhaps there is someone from your area? Contact details are given at the end of this article. 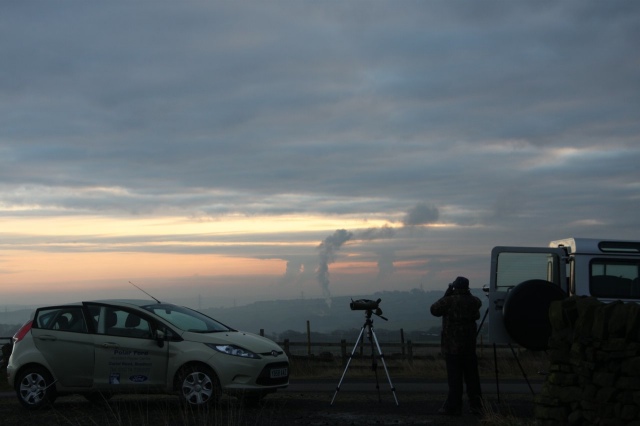 Pre-dawn late in the season, at a Pennine watch-point. (Photo: Dave Barker)

If you fancy having a go, here is a summary of methodology. Compliance is essential to ensure uniformity between the sites and over the years. Counts are entered and shared on the VisMig website www.trektellen.org; to get a login account contact Clive McKay the Trektellen UK Co-ordinator.

In the event that you are unable to count on the Sundays, or the weather forecast for Sunday is inclement, a count on the adjacent Saturday would still be very much valued. Feel free to count both Saturday and Sunday if you wish.

Anyone in the UK or Ireland can take part. The more contributors and the wider the spread the better.

Identify and count all of the moving birds you see or hear at any distance using binoculars, telescope or unaided vision, and note their directions of movement. Simply count the birds you see moving in each hour, along with basic weather, specifically noting any factors you may think are affecting the movement of birds.

Finally enter your data onto www.trektellen.org.

Counts should start at dawn (sunrise), and then continue in one-hour increments for as long as you wish or until the movement stops, Trektellen is able to analyse averages per hour as well as the actual numbers you count; but the comparison is still easier to appreciate if you stick to the hour increments. Just count for as long or as short a time as you are able, but stop at the end of the last hour increment you can manage. Exact sunrise times for your site are available on your own page on Trektellen.

Sunrise in Yorkshire on 26th September is at around 07:00 (an 06:45 start to get set up on time) so that's not too bad! On the other dates sunrise will of course be somewhat earlier or later. The reason for using "solar time" as the commencement base for the counts is to account for the considerable differences in sunrise times between east and west/north and south across the UK. The birds will almost certainly use solar time to commence their movements for the day, rather than BST or GMT! Your individual site sunrise time for each day is available on your Trektellen site page. See your Trektellen manual when you have signed up if unsure how to get it.

Here below are the UK Trektellen graphics for the target species, so that everyone can see how they fit with the dates. If you want to generate your own up-to-date graphics for the whole of the UK, various parts of Europe or any of the migration counting sites contributing to Trektellen, visit the link below and you will be able to do so with ease.

There is of course considerable bird movement throughout the summer and Swifts will be long gone, even before the first event. The main purpose of the event in late August is to sample the early-season vis as dispersals merge into real movement, which will get activities off to an early start this year. Tree Pipits and flava wagtails should be well recorded during this event, as should Swallows and the early flows of Meadow Pipits. The further north you are the more you should get, an obvious factor which is reversed at the end of the season. 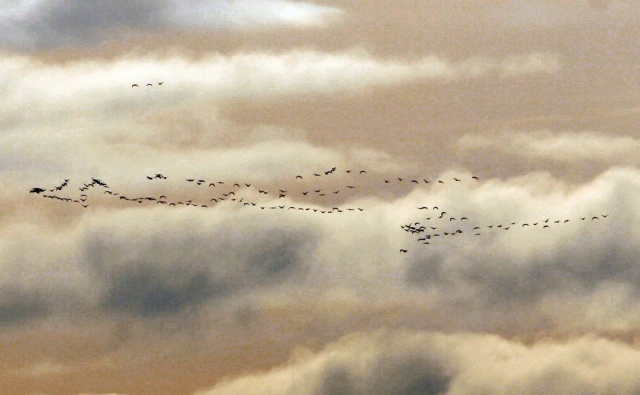 Sunday 26th September is the best option after consideration (and avoidance) of WeBs. Obviously this is dependent on conditions before and on the day, but we have got to go for it! Both species will be evacuating and thus moving south. Meadow Pipits may have passed their peak on the east coast but should be peaking in the Pennines. This period is also near the peak for first big push of Pink-footed Geese moving mainly south and southeast with their ultimate goal north Norfolk but also staging in northwest England. In the Pennines we normally get Pinkies heading directly to one or other of these areas. They definitely know where they are going! 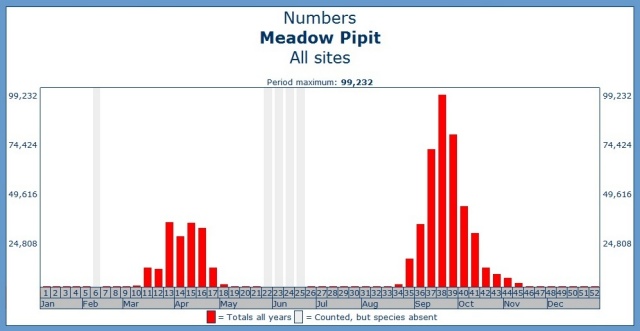 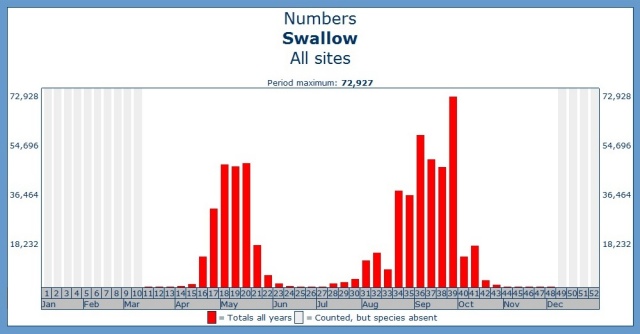 The October date misses the peak by some way, so do try getting out somewhat earlier in the month if you are interested, but the magnitude of passage on the day will obviously depend on suitable departure conditions from Norway and passage conditions over the North Sea. Let's hope you get a top day when you try! A big arrival overnight or the previous day will lead to a flood overland which, depending on the weather system or conditions at the coast, will often be heading west or northwest. Fall conditions are not what are wanted for a good day of vis-migging. 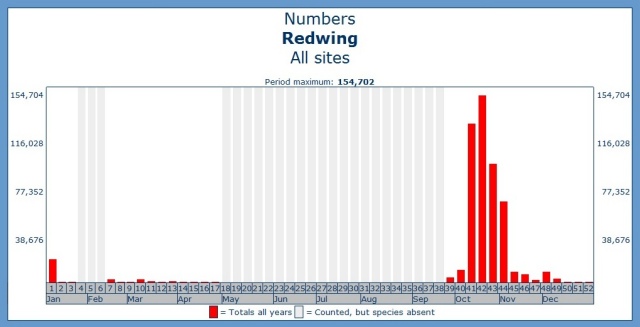 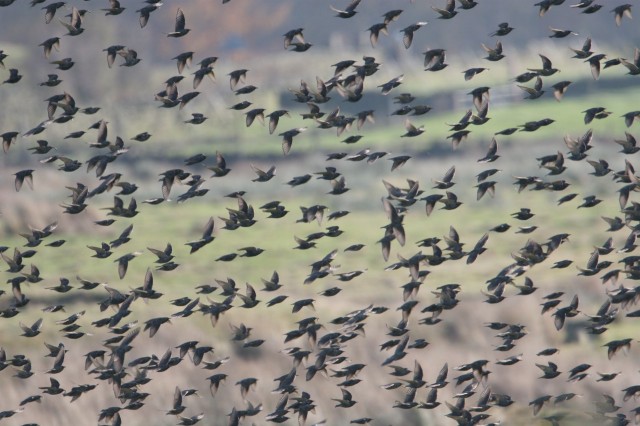 The October date is before the peak for Starlings this year. Unless you are on the coast, the extent of passage apparent on the day will depend on the magnitude of arrivals over the last day or so, together with weather conditions. Peak numbers arrive in southeast England from the Wash southwards as they tend to gravitate in the continent to the southern North Sea to cross to the UK. However, many then cross the UK to the northwest to arrive at the massive winter roosts up there; so we still get lots here in central northern England. Here they always fly low in both small and large squadrons, often carpeting the moor as they go...and to me they are amongst the most exciting vis on offer. For best results go out at the end of October and see! 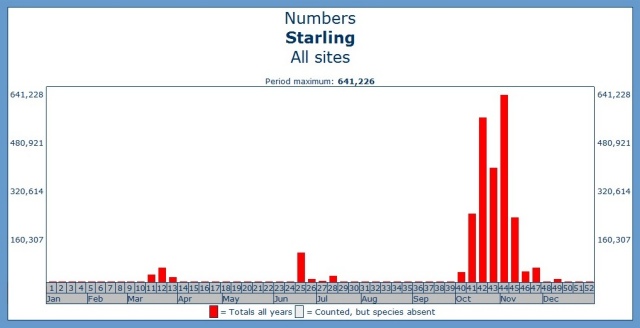 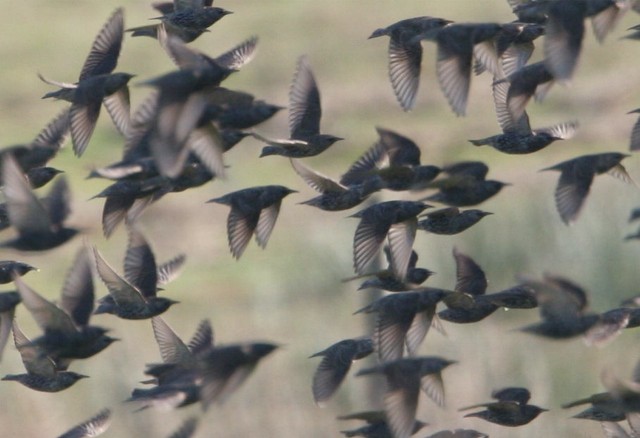 Fieldfare passage peaks later than the date of the event this year. The magnitude of passage on the day will be dependent on the same conditions as Redwing, possibly not just from Norway but from the Continent further south as well. Arrivals overnight will lead to a flood inland, again often west or northwest as Redwing but possibly just a little later in the morning. Again try for a big day when conditions are suitable. 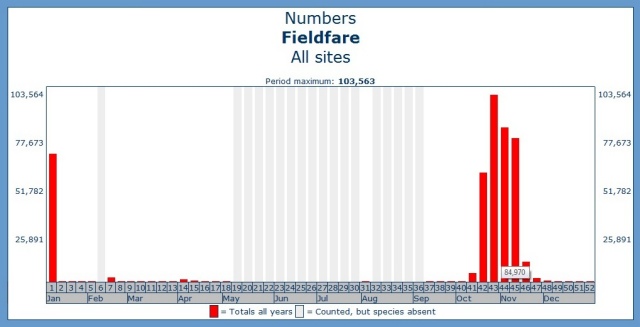 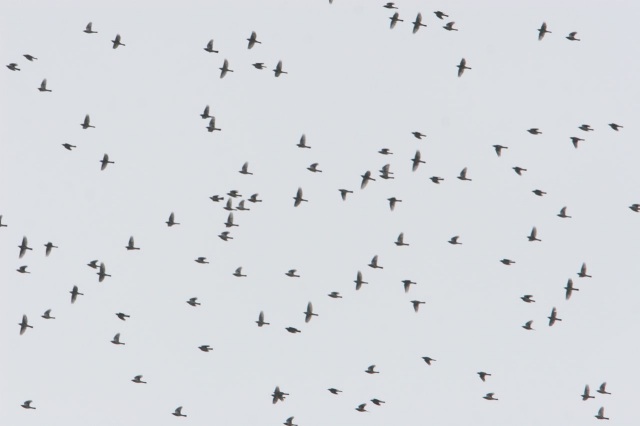 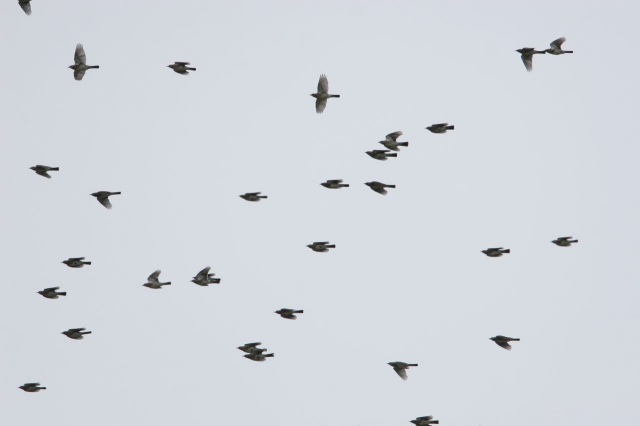 Woodpigeons will, depending on where you are in the country, be building up to a peak in November — later in the UK than on the continent. They move south from further north in the UK (not normally arriving from the Continent), seemingly more pronounced over the flatter lands than in the hills. Again it can be very exciting stuff, with massive tight balls of Woodies steaming south or southwest. Favourable conditions to induce movement are anticyclonic and calmish, often colder frosty mornings — the ones when it is wonderful to be out. 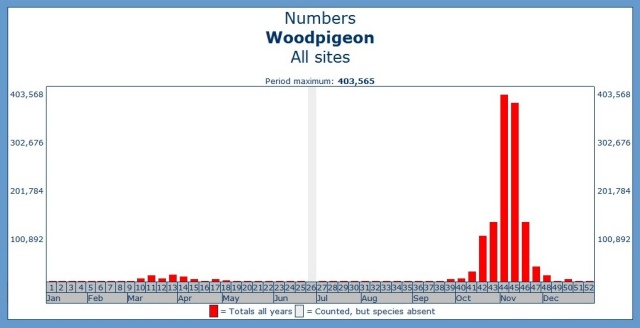 I hope that this summary together with the wonderful Trektellen graphs are of interest and stimulate more interest, especially to those that might be thinking of having a go. I can't wait for the time to come!