Scottish Natural Heritage (SNH) is advising people who see Grey Seal pups — common at this time of year in parts of Scotland — to keep their distance to ensure the youngsters' mothers don't abandon them. Grey Seal pups are born from the end of this month (September) until mid-December. The main concentrations are in Orkney, southeast Scotland and the Inner and Outer Hebrides, with smaller colonies in Shetland, and along the north and northeast coasts of Scotland in particular. The young can't immediately venture into the sea after birth, but stay on the foreshore for up to 30 days while their mother feeds them to build up their body fat and strength.

Any disturbance stresses the pup and mother, and the youngster may also move away from where the mother has left it. If approached, the adults may become alarmed and stampede towards the sea, resulting in pups being crushed or injured. Tom Cunningham, manager of Tentsmuir National Nature Reserve, said: "We already have a few seal pups at Tentsmuir and people are understandably fascinated by them. But we'd ask people to keep themselves and their dogs a good distance away and never touch a seal pup. Even if a seal pup appears to be on its own, the mother may be close by and may abandon her pup if it sees people nearby." 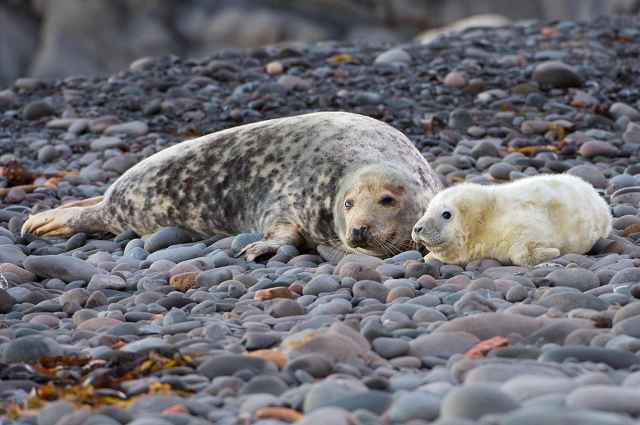 Therese Alampo, manager of St Cyrus NNR, added: "We occasionally have seal pups left by their mums on the beach, so folk think they are abandoned and try to get close or even stroke the pups. The best advice is to leave them alone and enjoy a look from well back. We'd appreciate too if people could pop in the reserve office and let us know if they see seal pups."

Grey Seals are found only in the north Atlantic, the Baltic Sea and the Barents Sea. They are one of the rarer seal species, with a world population of only 350,000–400,000. Around 36% of the world population lives in the UK, and around 90% of these live in Scotland.