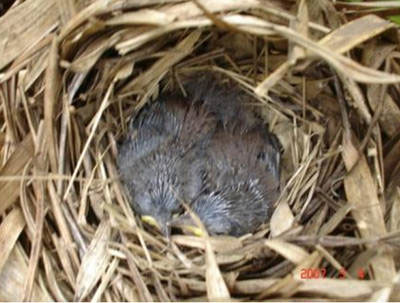 In the past, adult Swamp-warblers have been recorded throughout the Rift Valley, in Burundi, Democratic Republic of Congo, Uganda and Rwanda. Yet breeding and nesting behaviour - two vital facets of information for conservationists working to save the species - remained largely unknown until now.

"During our routine surveys of the Kabatwa Swamp in the Volcanoes National Park In Rwanda, we came across a small cup-shaped nest perched in foliage 35cm from the ground. The nest was built from Poa leptocrada and other sedges. To our surprise there were two chicks sitting in the nest," said Claudien Nsabagasani, Ornithological Researcher with Dian Fossey Gorilla Fund International (DFGFI) and IBA Focal Point for Association pour la Conservation de la Nature au Rwanda, ACNR (BirdLife in Rwanda).

"We revisited the Swamp-warbler nest daily from then on to acquire information on nesting and feeding behaviour before the chicks fledged a week later."

The photos of the warbler nest are Rwanda's first, shedding important light on the reproductive ecology of the species.

The surveyors, supported by funding from RSPB (BirdLife in the UK) and DFGFI, had been monitoring Grauer's Swamp-warbler over four seasons, starting in July 2006, in the Volcanoes National Park, an Important Bird Area (IBA).

"With threatened species, every nest counts," said Paul Kariuki Ndang'ang'a, the Species Programme Manager at BirdLife Africa Partnership Secretariat. "Information on where the birds choose to make their nests -at what height, and in what foliage- are all crucial pieces of information for those involved in managing and surveying these sites to help secure populations of threatened species."

Grauer's Swamp-warbler is listed as Endangered as a result of its very small, fragmented and declining range - a reflection of habitat loss as the Rift Valley's mountain forests are converted to cultivation and pasture.

"The Swamp-warbler population in the Volcanoes IBA are protected, which is encouraging news for the future of these newly discovered young fledglings," said Serge Nsengimana, the ACNR Executive Officer. "But site protection remains a critical issue for the species as a whole."

"Hopefully this added knowledge on nesting behaviour will help in our efforts to save this endemic species from possible extinction."