Fire ants and devastating rains hit as funding dried up but, thanks to the public's generous response to an emergency fundraising campaign, the Critically Endangered Tahiti Monarch is this year having its best ever breeding season, with 12 young successfully fledged and one nest still active.

However, there is no rest when it comes to protecting one of the rarest birds in the world from habitat loss and introduced invasive species. Following the award, Manu urgently reported their need for more support. As funding for conservation dried up, heavy rain, winds, invasive predatory rats and fire ants threatened the 10 remaining breeding pairs in a steep wooded valley in the South Pacific. That's 10 breeding pairs in the entire world.

In response BirdLife launched an urgent campaign to raise the £33,000 Manu needed to fight these threats. The response was overwhelming: donations totalled £33,370 and are still coming in, and the Tahiti Monarch is having its best ever breeding season. 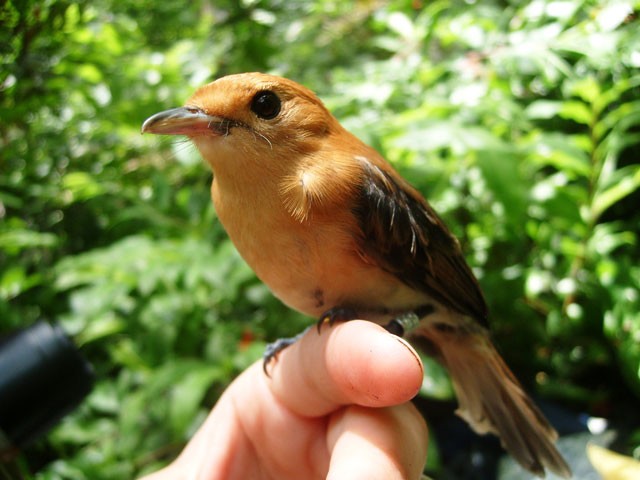 "This is fantastic. Thank you to all the people who have supported our work. Manu now feel that we are not alone in trying to save this remote, beautiful and very endangered species," said Caroline Blanvillain, Head of Land Birds at Manu.

The money raised is being targeted towards the most important actions on the ground: tackling invasive species and restoring degraded habitat for the 50 Monarchs, which currently reside only on Tahiti. Manu are already starting work to eradicate a fire ant colony at the entrance of Papehue valley, the Monarch's main stronghold. This will take eight months as the ant colony covers four hectares. These invasive species are originally from South America and form supercolonies. Also within the birds' breeding range there are two other large ant colonies that will be controlled before they spread and overpower the birds with their collective stings.

Manu are also using the funds raised to work with local school children to restore these friendly birds' habitat, through education and trips into the valley to clear invasive plants and to plant native trees.

Despite facing difficult weather conditions, Manu are showing that invasive-species removal combined with habitat restoration can successfully reverse the species' decline towards extinction.

"We have now reached 12 successful fledglings which betters the record from last year. We also still have one active nest, which suggests we may have the first second brood for the species we've ever recorded!" said Caroline. "We now know that the world is behind us, and this is a very nice feeling," she concluded, thanking all the people who have generously supported Manu's work.