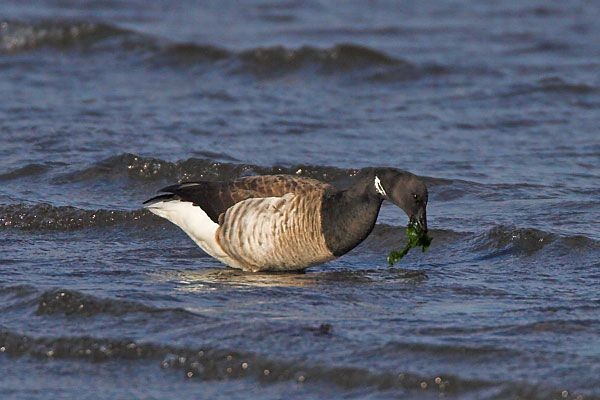 This week brings sad news for the returning Supergeese. Douglas has been shot dead and his legs returned in the post as shocking proof!

This week Arthur has also been reported as missing. Of the ten Supergeese fitted with transmitters by the Wildfowl and Wetlands Trust scientists in the spring, only five are still in the race.

Douglas met his demise on Disco Bay, Western Greenland, when hunters were reported to have seen a group of seven light-bellied Brent Geese and shot and killed two of them - one of them poor Douglas. When the hunter discovered the WWT satellite transmitter he reported it and returned the transmitter complete with Douglas' severed legs and leg rings so the goose could be identified.

The return journey from the Arctic tundra, over the Greenland ice-cap through Iceland and back to Ireland, is fraught with hazards and illegal hunting is just one of the obstacles that the migrating geese must face every year.

WWT project scientist Kendrew Colhoun said: "While we can't be sure of the precise reasons why some of the tracked geese have disappeared, Douglas' fate may well have been shared by others. It is unlikely that all birds have been shot as other reasons may be responsible including mortality due to poor weather, or transmitter malfunction or loss are also possible. What happened to Douglas is, however, illustrative of one of the many hazards these birds face on this long and arduous migration."

"Finding out this sort of information on mortality sources, identifying migratory routes and the importance of staging areas are key objectives of the project. We would hope that the sad news on Douglas will help us to argue for stricter conservation measures of this population as they pass through Greenland in spring and autumn."

Pale (Light)-bellied Brent geese are a protected species in the UK, Ireland, Iceland and Greenland and satellite tracking enables WWT scientists to help protect them by finding out what sites they use, what routes they take, how long it takes them and how they cope with the journey.

The return of Supergoose will feature on BBC Autumnwatch with Bill Oddie during the first two weeks of October (Monday-Thursday evenings on BBC2 at 8pm starting 2 October).

The progress of Orville, Howard, Alberto, Clark Brent and Hermes can be followed online and via email and text alerts via www.wwt.org.uk/supergoose and www.bbc.co.uk/autumnwatch.