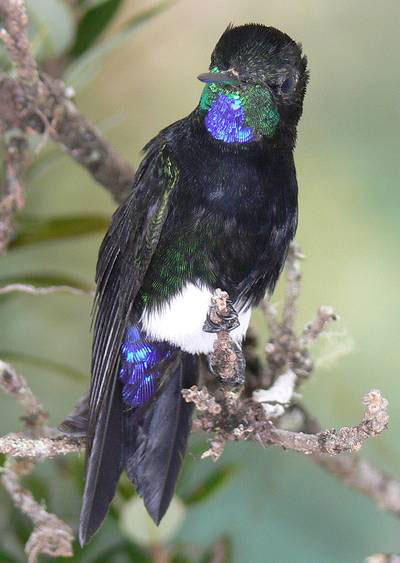 The flamboyantly coloured Gorgeted Puffleg Eriocnemis isabellae, a new species of hummingbird, has been discovered in Colombia. But there are concerns over its future safety because the Serrania del Pinche mountains where it was discovered are unprotected.

Ornithologists Alexander Cortés-Diago and Luis Alfonso Ortega made three sightings of the new hummingbird during surveys in 2005 of montane cloud forest in the Serrania del Pinche, south-west Colombia.

"We were essentially following a hunch," said Alexander Cortés-Diago of The Hummingbird Conservancy (Colombia) and co-discoverer of Gorgeted Puffleg. "We had heard that a new species of plant had been discovered in the region in 1994. This discovery and the isolation of the Serrania led us to believe there could also be new species of vertebrates."

"Though we expected to find new species of amphibians and new ranges for birds, the discovery of a new hummingbird was completely unexpected."

The highly distinct new species is characterised by an enlarged bicoloured iridescent throat patch (hence 'Gorgeted') in males and white tufts above the legs which are characteristic of 'Puffleg' hummingbirds.

Further surveys in 2006 brought more sightings and photographs which were sent for identification to Prof. Karl-L. Schuchmann, curator of ornithology at Zoological Research Museum A. Koenig (Germany).

Dr André-A. Weller of the Brehm Fund for International Bird Conservation/Zoological Research Museum A. Koenig, co-author of the scientific description published in Ornitologia Neotropical noted: "We immediately suspected the bird as a new species. Further study has shown that this is certainly the most spectacular discovery of a new hummingbird taxon during the last decade or more."

The mountainous Serrania del Pinche region may hold other new species but their future isn't secure. 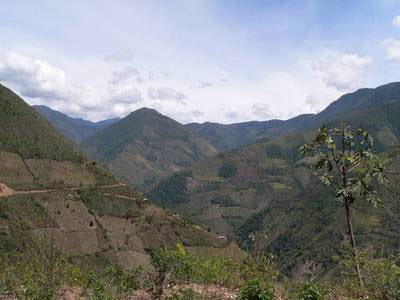 Serrania del Pinche is shrinking dramatically due to the spread of coca farming and 'slash and burn' agriculture (Photo: Alex Cortes)

"The isolated nature of the Serrania del Pinche within the biodiverse Choco region makes it likely that further new species await discovery," said Luis Mazariegos-Hurtado of The Hummingbird Conservancy. "Yet a major threat to these forests exists: the increase in coca fields and 'slash and burn' agriculture. It is estimated that 500 hectares are lost each year." commented Mazariegos-Hurtado.

The species has been heralded by BirdLife International as one of the most significant new discoveries of recent years.

"This is an important discovery for bird conservation and further evidence of how much more there is to learn about the world's forests, and how much we stand to lose if they are allowed to be destroyed." said Ian Davidson, Head of BirdLife International's Americas Programme based in Ecuador. "Gorgeted Puffleg is a flagship species for the biodiversity of Serrania del Pinche, which must be conserved," he added. 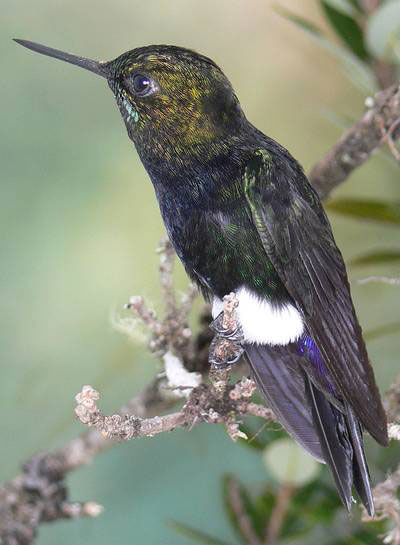 Gorgeted Puffleg is predicted to have a very small habitat range, hence its survival may hang in the balance (Photo: Alex Cortes)

"To go undiscovered for so long, the bird's range must be extremely small and fragile – hence conservation action is undoubtedly a priority for the Serrania del Pinche."

A number of conservation organisations are now looking to ensure the region is secured further protection. The Hummingbird Conservancy has started a conservation initiative with local communities and governmental organisations, whilst Fundación Ecohabitat (Colombia) is working to reduce the relentless expansion of agriculture into the forests by promoting use of legal crops and sustainable agriculture.

"This is a discovery with mixed emotions: the indescribable happiness of finding a new hummingbird and the harsh reality that this may be one of the most endangered species outside of an unprotected area." said Luis Alfonso Ortega of Fundación Ecohabitat, co-discoverer of the hummingbird.