A new study led by the RSPB Centre for Conservation Science has revealed the extent of moorland burning across Britain's upland areas. Burning on moorlands, a mixture of bog and heath habitats, is widely used to increase the numbers of Red Grouse that are available for recreational shooting.

Burning was detected in 55 per cent of Special Areas of Conservation (SACs) and 63 per cent of Special Protection Areas (SPAs) assessed in the study, and significantly more burning took place within them than on comparable moorlands outside. These sites are designated under EU legislation for their conservation importance, and governments are charged with protecting them from damage and ensuring that they are restored to the best condition. However, many SACs and SPAs are in unfavourable condition, with burning identified by governments and statutory agencies as a primary reason for this poor status.

Dr David Douglas, Senior Conservation Scientist at RSPB Scotland and lead author of the study, said: "Upland ecosystems are highly sensitive to burning practices. Knowing how much burning takes place and where is crucial to developing sustainable land management policies for these precious environments." 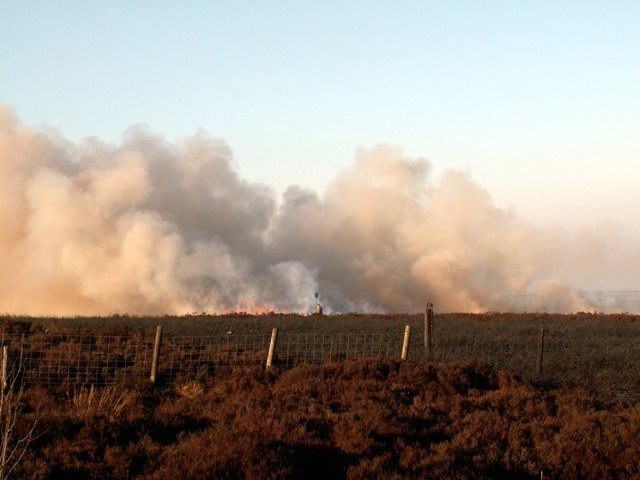 Controlled heather burning is carried out to promote new growth for Red Grouse to feed on (Photo: John Fielding/wiki commons))

The study, published in Biological Conservation, is the first time upland burning has been mapped in detail across mainland Britain. Using aerial photography and satellite images, 45,000 1km squares were mapped across Scotland, England and Wales, and revealed that burning occurred across 8551 of these squares. In the ten-year period covered by the study from 2001 to 2011, the number of burns recorded increased rapidly by 11 per cent each year. Other studies have found that the potential number of Red Grouse shooting days in some areas of Britain has risen over a similar period, and that moorland management has also intensified.

In Scotland and England, a third of burning took place on deep peat soils, an important carbon store. The UK has 10–15 per cent of the world's blanket bog peatlands. Locking in 3.2 billion tonnes of carbon, this deep peat in the uplands is the largest carbon store in the UK. Upland areas are also a vital water source, supplying around 70 per cent of our drinking water. Burning has been linked to poor water quality in these areas, requiring large sums of money to treat the water.

Martin Harper, Director of Conservation at RSPB, said: "Our uplands are amongst our most precious habitats in Britain and home to important wildlife. However, many of our uplands are in poor condition, due to intensive land management practices. It's very worrying that burning is increasing, given the damage it can cause and that it occurs in many of our conservation areas. Governments and statutory agencies across Britain need to take action to reduce burning in our uplands rather than allowing them to be increasingly damaged year on year. Although their regulations already advise against burning on blanket bog it is often used on these areas with their consent. These regulations need to be strongly enforced so that uplands are properly protected against this damaging practice."