State of Nature 2016 report: will the government act?

Top conservationists assembled at the Royal Society headquarters in London yesterday to launch the State of Nature 2016 report, where government plans were potentially found wanting.

Speakers at the event included veteran broadcaster and campaigner Sir David Attenborough, wildlife presenter Iolo Williams, the RSPB's director Mike Clarke and the new Secretary of State for the Environment, Food and Rural Affairs, Andrea Leadsom, gave their verdict on the report's findings, which give a poor prognosis for British nature unless we act quickly.

The State of Nature 2016 report — which summarises the current condition of the nation's wildlife — was launched in style, but this could not distract from the depressing fact that overall more than one in 10 of 4,000 British species are already facing oblivion in the country.

Perhaps even more awkwardly, the UK has been revealed to be among the most "nature-depleted countries in the world". 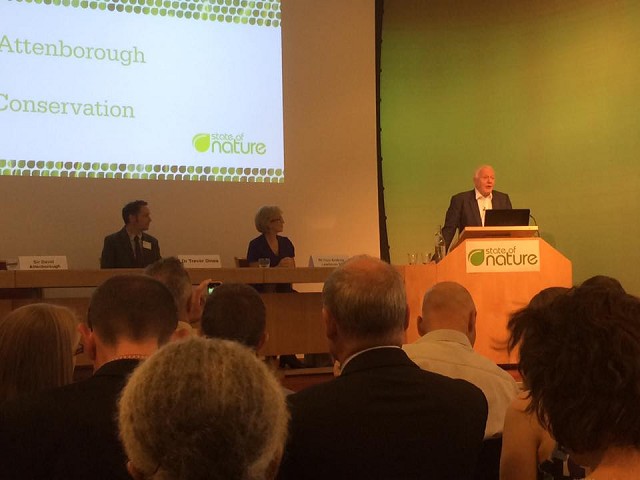 Sir David Attenborough gave the keynote speech at the gathering and, to many attendees' amusement, almost immediately turned his attention to the DEFRA minister, saying he hoped that the government would be up to the task of addressing the massive declines highlighted in the State of Nature 2016. The minister seemed unfazed, later repeating her threadbare belief that the government would be the greenest ever, but refraining from hugging any huskies that might have been present.

As well as the damning news of the long-term declines in 56 per cent of all species monitored over the last 46 years, there were some less tangible animals to deal with: a number of proverbial elephants in the room. The DEFRA representative in particular seemed to be pachyderm-blind, but others took the bull by the tusks to varying degrees.

The speakers dealt with our imminent departure from the EU but, despite being assured that 'Brexit means Brexit', no one yet knows what Brexit means, least of all the government minister present. However, every speaker talked of the 'opportunities' leaving the EU would bring. Rising to the challenge of maintaining the current Species Directives in spirit and principle was encouraged, but will clearly involve renegotiating virtually all environmental legislation, as most was established within the European Parliament and will not stand as UK law. This is intensely worrying: there will indeed be opportunities to firm up environmental protection, but also a lot of room for Alan B'Stard-style opportunists in government to hinder or reverse progress, as is already happening on a grand scale.

"Like it or not Brexit has happened. All agriculture and environment treaties for nature and wildlife will have to be rethought. It's a great opportunity to refine the legislation to match our part of the world,” Sir David said, though with a government not known for its grasp of empirical data or valuing of the natural world, this battle will be much harder than it should be.

Leadsom kept a straight face and approached the second 'elephant' — what to do about the declines — tentatively, as if it might go rogue. Hoping that we had forgotten David Cameron's status as an environmental Janus over the last seven years, she spoke of a nebulous '25-year plan' during which the government would return British nature in a better state than it had been received. Unless the current administration actually lasts that long, it is difficult to see how this undertaking can be convincingly applied.

Whether this particularly runny 'green crap' will harden resolve remains to be seen, what with Leadsom and her department being red-tape cuttin', (former) climate change denyin', badger cullin', fox-hunt ban repealin', public forest sellin' conservation cowboys. Certainly, on its current trajectory the government's spending on biodiversity protection has been declining almost as fast as some of our wildlife, with DEFRA undergoing cuts of 34 per cent in real terms over the period from 2015-2018, and 57 per cent since the Conservatives came to (shared) power in 2010.

The government's current record is the polar opposite of a forward-looking, evidence-based environmental position, and the ice shows little sign of melting. Under Amber Rudd last year, support for wind power wafted away, solar power funding evaporated and biomass subsidies decayed, while fracking was enabled, green tax schemes shelved and EU legislation repeatedly opposed. Leadsom is unlikely to reverse these decisions as immediately as they should be, as this would mean they were wrong and no party can ever admit that.

Add to this DEFRA's loose attitude to a neonicotinoid ban, the extreme declines in farmland and woodland species highlighted in the State of Nature 2016 and the under-deployment of Marine Protected Areas, and Tory environment policy is stampeding and trumpeting without a mahout.

At the launch, the main speeches were followed by a panel of experts from the worlds of business, farming and environmentalism answering the audience's concerns in a BBC Question Time-style format. Wildlife TV presenter Iolo Williams showed some steel in his opinions of government ministers, unfortunately well after the DEFRA head had bolted.

The frantic pre-presentation Googling of Leadsom's underlings had informed her that we have done good conservation work to save the 'Curl Bunting', but the diaphonous fabric of her speech nakedly exposed the nature of her position: a 'job on the way to a real job' in government. This was pointed out by an impressively vehement Iolo Williams, who pleaded for the position to have real substance and for future Environment Secretaries to have true empathy with wildlife.

Currently, the job is the government's white elephant and will certainly remain so, at least until Brexit means whatever it means.