Thirty endangered Spoon-billed Sandpiper chicks have been hatched by conservationists in Russia in recent days. This good news follows the tragic death last week of the world's first captive-bred individuals.

The 30 Russian chicks have been hatched from eggs taken from the wild by experts from WWT and Birds Russia as part of a strategy known as ‘headstarting', which runs in parallel to the captive breeding programme at Slimbridge WWT, Gloucestershire, and will be released into the wild in three weeks time. With only around 200 pairs of this critically endangered species left in the wild, headstarting ensures at least some chicks avoid danger from predators and extreme weather during the perilous time before they can fly.

This is the fifth year of headstarting and so far 81 fully fledged Spoon-billed Sandpipers have been released into the wild, increasing the number of young leaving the birds' breeding ground in Russia by 20 per cent.

Further good news has come from New Zealand company Heritage Expeditions, which last week discovered Spoon-billed Sandpipers breeding at a spot in Kamchatka to the south of Chukotka where they haven't been seen for over 10 years. 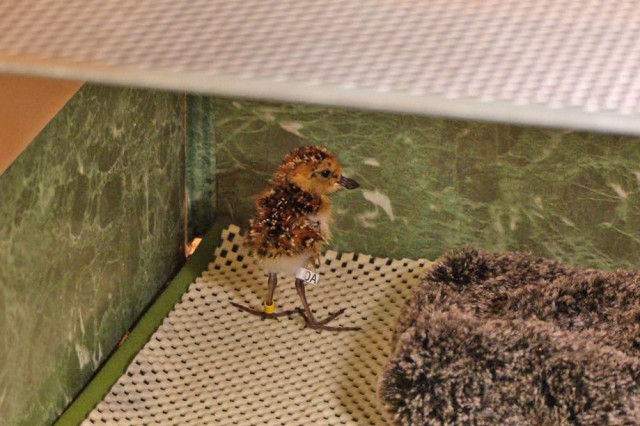 The Spoon-billed Sandpiper chick, called '0A yellow left' after its ring combination, was the first of this year's headstarted broods to hatch (Photo: WWT)

WWT's Head of Conservation Breeding Nigel Jarrett said: "It's fantastic to hear good news after an emotional week last week. The captive breeding programme is just one part of the massive effort to save the Spoon-billed Sandpiper.

"The headstarting project is shaping up for another phenomenally successful year. Overall this strategy has worked better than we dared imagine. Each year, birds that were headstarted as chicks are returning to breed, which is the best sign that they are as healthy and strong as their parent-reared counterparts.

Birds Russia's Chief Executive Dr Evgeny Syroechkovskiy said: "Heritage Expeditions have [come] up trumps this year and it's brilliant news. Each summer they survey some of the most remote and inaccessible places on earth, searching for breeding 'Spoonies'. Each discovery like this could provide a vital clue or a vital opportunity to help us in ensuring a future for Spoon-billed Sandpiper."

Ian Fisher from the RSPB, a key partner in the work to save the species, said: "Headstarting is turning out to be a valuable 'quick win' in the conservation toolkit for Spoonies, and the team in Russia should be congratulated on their incredible success."

Last week, the first two Spoon-billed Sandpiper chicks ever bred in captivity hatched at Slimbridge, but both died within days. Experts are waiting for post mortem results to determine the cause of death.