The fossilised remains of Britain's largest ichthyosaur have been discovered at Rutland Water Nature Reserve.

Colloquially known as a 'sea dragon', it is the biggest and most complete skeleton of its kind found to date in the UK and is also thought to be the first ichthyosaur of its species (Temnodontosaurus trigonodon) found in the country.

The remains were fully excavated in 2021 and will feature on BBC Two's Digging for Britain at 8 pm tonight [11 January]. 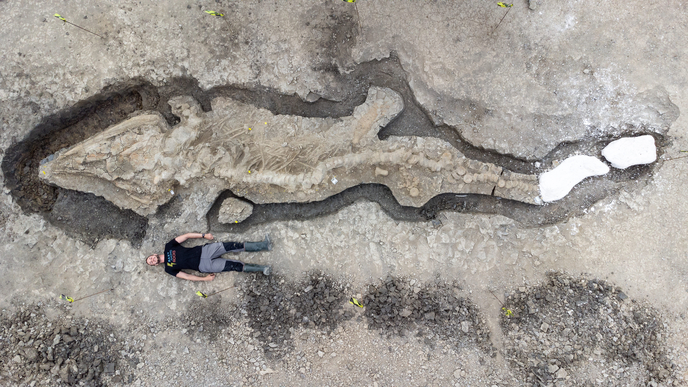 The ichthyosaur was discovered by Joe Davis, Rutland Water Conservation Team Leader, during the routine draining of a lagoon island for re-landscaping in February 2021.

Davis and Reserves Officer Paul Trevor set off across the lagoon when Joe noticed what looked like clay pipes sticking up out of the mud, except that they looked organic.

Mr Davis explained: "I worked out on the Hebrides, so I've found whale and dolphin skeletons before. This appeared similar and I remarked to Paul that they looked like vertebrae. We followed what indisputably looked like a spine and Paul discovered something further along that could have been a jawbone. We couldn't quite believe it.

"The find has been absolutely fascinating and a real career highlight. It's great to learn so much from the discovery and to think that this amazing creature was once swimming in seas above us and now, once again, Rutland Water is a haven for wetland wildlife – albeit on a smaller scale!"

Ichthyosaurs first appeared around 250 million years ago and went extinct 90 million years ago. They were an extraordinary group of marine reptiles that varied in size from 1 to more than 25 m in length, and resembled dolphins in general body shape. 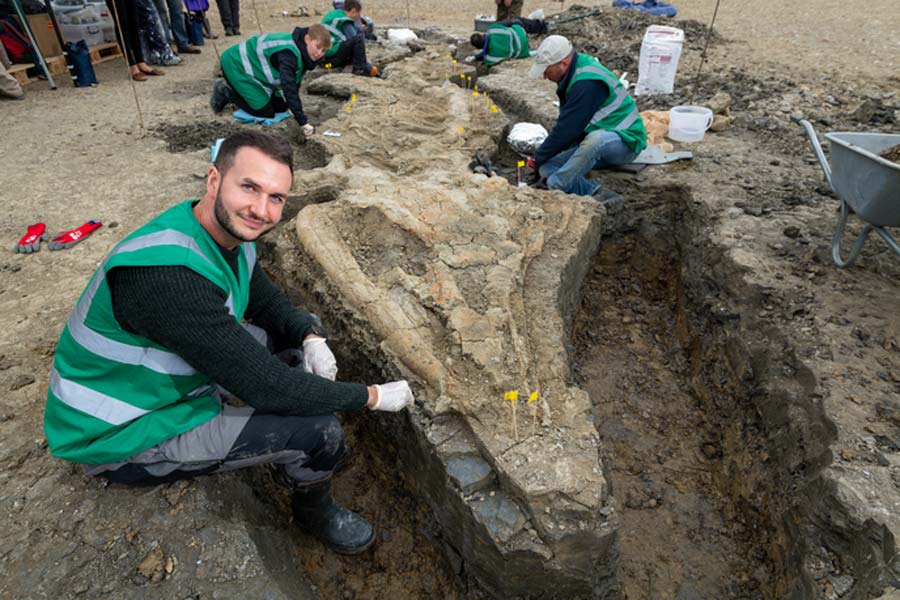 The fragile remains of the huge skeleton were carefully excavated in August and September 2021 by a team of expert palaeontologists assembled from around the UK, in partnership with Anglian Water, Rutland County Council and Leicestershire and Rutland Wildlife Trust. The excavation was led by world ichthyosaur expert Dr Dean Lomax and specialist palaeontological conservator Nigel Larkin, along with marine reptile specialist Dr Mark Evans, Dr Emma Nicholls from the Horniman Museum and volunteers with experience of excavating fossilised marine reptiles. Working meticulously, a near-complete skeleton was uncovered.

Such a discovery is not a first at Rutland Water, with two incomplete and much smaller ichthyosaurs found during the initial construction of the reservoir in the 1970s.

CEO for Anglian Water, Peter Simpson, said: "Rutland Water has a long list of previous, fascinating archaeological and palaeontological discoveries, but none more exciting than this. We also recognise the significance a find like this will have for the local community in Rutland. Our focus now is to secure the right funding to guarantee its legacy will last into the future."

Dr Dean Lomax, a palaeontologist who has studied thousands of ichthyosaurs and named five new species in the process, said: "It was an honour to lead the excavation. Britain is the birthplace of ichthyosaurs – their fossils have been unearthed here for over 200 years, with the first scientific dating back to Mary Anning and her discoveries along the Jurassic Coast. Despite the many ichthyosaur fossils found in Britain, it is remarkable to think that the Rutland ichthyosaur is the largest skeleton ever found in the UK. It is a truly unprecedented discovery and one of the greatest finds in British palaeontological history."