A spectacular hummingbird species feared extinct for 69 years has been rediscovered during dry season fires across the Sierra Nevada de Santa Marta in Colombia.

An intense and prolonged dry season in the Sierra Nevada de Santa Marta, combined with fires set by Kogi indigenous people for agricultural purposes, has devastated its fragile high-elevation habitat or páramo, home to a suite of endemic plants and animals.

Two conservationists — Carlos Julio Rojas and Christian Vasquez — who work at ProAves' El Dorado nature reserve in the mountain range, carried out investigations to document the fires. On 4 March 2015, they photographed the spectacular Blue-bearded Helmetcrest — a hummingbird last seen in 1946 and feared extinct. Unfortunately, the habitat of the three birds they saw is threatened by the ongoing fires. A scientific article detailing the rediscovery was published today in the journal Conservación Colombiana and is available online at www.proaves.org.

Described in 1880, Blue-bearded Helmetcrest was last seen in 1946. Restricted to the world's highest coastal mountain range — the Sierra Nevada de Santa Marta, which rises to over 19,000 feet — the hummingbird was suspected to be facing severe threats as cattle ranching by indigenous people expanded across the sensitive high-elevation slopes of the mountain range. Each dry season, more of the fragile brush and forest is burned to make way for cattle grazing. The fragile montane forests are unique as the range pre-dates the Andes by over 100 million years. 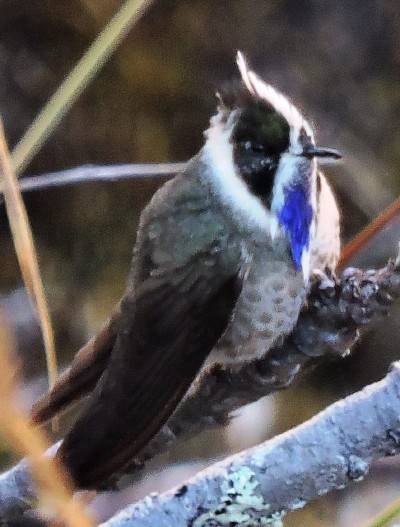 Over the past 10 years, searches for Blue-bearded Helmetcrest have failed. Last year it was pronounced Critically Endangered by IUCN and BirdLife International, and considered to be possibly extinct. The species is dependent on stunted forest and bushes amongst natural páramo grasslands — habitat that is highly susceptible to fires during the dry season. The situation is even more difficult because the flower the helmetcrest depends on — the Santa Marta Frailejon — is itself threatened by persistent fires and has also been declared Critically Endangered.

The highest elevations of Sierra Nevada de Santa Marta were declared a National Park in 1964, and 15 years later the park was declared a UNESCO Biosphere Reserve. The reserves cover the mountain range and hold some 50,000 indigenous people, mainly of the ethnic groups Kogi and Arhuacos. In 2014, the journal Science published an article that identified the Sierra Nevada de Santa Marta National Park as the world's most important protected area for the conservation of threatened terrestrial species — rated first across over 173,000 protected areas worldwide.

During a prolonged and particularly intense dry season in February 2015, National Park staff informed local conservationists Carlos Julio Rojas and Christian Vasquez, who work for Fundación ProAves at the El Dorado Nature Reserve in the Sierra Nevada de Santa Marta, of an ongoing crisis with fires set by indigenous peoples across the park. Seeking to document the environmental impacts of this burning, Carlos and Christian used their vacation time to explore the higher elevations of the mountain range and recorded multiple fires that were destroying fragile natural habitat.

At 11 am on 4 March 2015 during surveys of the fire, Rojas excitedly noted: "I saw the flash of a bird screeching past me and saw it perch on a bush nearby. I managed to take a quick photo of it before it flew off. I then reviewed the photo on the camera screen and immediately recognised the strikingly patterned hummingbird as the long-lost Blue-bearded Helmetcrest — I was ecstatic! After reports of searches by ornithologists failing to find this spectacular species, Christian and I were the first people alive to see it for real."

Vasquez took up the story: "We set up camp and for the next two days watched the area to document a total of three individuals of the helmetcrest in an area of less than 10 ha, in three tiny scattered patches of forest clinging to the steep hillsides and surrounded by the remains of burnt vegetation... the area is really important as we also discovered the Critically Engendered Santa Marta Wren alongside the helmetcrest."

"Sadly the survival of the Blue-bearded Helmetcrest hangs by a thread," said Rojas. "The impacts of fire are everywhere with the charred remains of plants littered across the páramo. I spoke with the Arhuacos indigenous peoples and they told me that the Kogi peoples are setting the fires and running pigs and cattle across the area. It is crucial that the fires are stopped immediately and that cattle and pigs are removed from the highest elevations to allow the fragile páramo ecosystem to recover before this unique hummingbird and its equally rare food plant become extinct."

Over one million inhabitants in the arid lowlands around the Sierra Nevada depend on the filtration and provision of water from its páramo ecosystems. Further degradation of this habitat for livestock production not only endangers the survival of the helmetcrest, but could also result in future severe droughts impacting the people of the region.

Hopefully, the National Parks authority and the Kogi indigenous peoples can work together with Fundación ProAves to better protect the future of the Sierra Nevada de Santa Marta, perhaps the planet's most irreplaceable mountain for both people and biodiversity.

This is the second piece of good news within a week for Colombian avifauna, following last week's revelations that a new species of tapaculo had been described from humid montane forests within the country (more here).