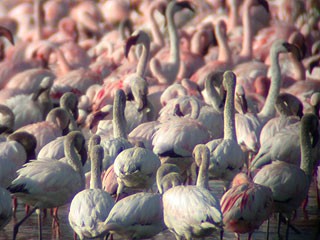 A proposed development near Tanzania's border with Kenya threatens the survival of the entire East African population of Lesser Flamingo. Lake Natron - the only East African site in which Lesser Flamingo has bred in the past 45 years - currently faces an uncertain future due to a proposed Soda Ash extraction and processing plant.

Lake Natron is recognised internationally as a Ramsar site, and as an Important Bird Area by BirdLife International. The proposed Soda Ash development will pump 530 cubic metres of brine per hour and produce and export 0.5 million tons of sodium carbonate a year. There may also be a 11.5 Megawatts thermal power facility using coal and petcoke, and a potentially sizeable residential complex, with 152 permanent and 1,225 construction staff members expected on site.

In compliance with Tanzania's environmental laws, in 2006 TATA Chemicals (on behalf of the proponent, Lake Natron Resources Limited) commissioned a consultant to carry out an Environmental Impact Assesment (EIA) for the proposed development. In addition to Tanzania, the consultant also carried out further consultations with interested and affected parties in Kenya, due to the project's vicinity to the Kenyan border as well as the dependence of Lake Natron on Kenya's Ewaso Ngiro River. The outcomes of these consultations are yet to be made public, although indications suggest that the first draft of the EIA will be presented at a workshop in Dar es Salaam (Tanzania) on 12th July, 2007. Conservationists await the outcome, their main concern being that the EIA process, including scrutiny of the draft, should be made participatory and take in the views of all relevant stakeholders.

"It is important that whatever decisions are made do not jeopardise the survival of the Lesser Flamingo, a key component of the tourist experience in East African national parks," said Mr. Lota Melamari, CEO of the Wildlife Conservation Society of Tanzania (WCST, BirdLife in Tanzania), before highlighting how important it is for the EIA to be disclosed to all stakeholders interested.

In September 2006, experts met at the BirdLife Africa Partnership Secretariat office to start the process of drafting the International Lesser Flamingo Species Action Plan under the auspices of the Convention on Migratory Species and AEWA (the African-European Migratory Waterbird Agreement). At the time the experts involved declared: "the most critical threat to the survival of the Lesser Flamingo to be the loss and/or degradation of its specialised habitat through altered hydrology and water quality".

According to a spokesperson from BirdLife's Africa Division: "Any declines in the breeding of Lesser Flamingos at this site could effectively push the species rapidly towards extinction. The Lesser Flamingo is globally classified as 'Near Threatened' in the 2006 IUCN Red List of Threatened Species," said Dr. Brooks Childress, Chair of the IUCN-SSC (Species Survival Commission); Wetlands International Flamingo Specialist Group. "Over 75% of the species' global population occurs in the Great Rift Valley of East Africa. There appears to be very little interchange between this large sub-population and other smaller Lesser Flamingo regional populations. The East African sub-population has bred only on Lake Natron for the past 45 years, effectively making Lake Natron the only breeding site for over 75% of the global population. The Lesser Flamingo is very sensitive to water levels and disturbance during breeding. Changes in water level, water chemistry or disturbance could easily cause the birds to abandon their breeding attempt."

A group of concerned organisations and stakeholders within the region, including WCST and NatureKenya (both BirdLife Partners), have joined hands with other conservation groups in pushing for the EIA outcomes to be disclosed to all stakeholders and for a full participatory process.

Lesser Flamingo breeding in such enormous numbers has been referred to as the "greatest ornithological spectacle in the world" by the renowned artist and naturalist Roger Tory Peterson. The local extinction of Lesser Flamingo at the site is therefore predicted to have a devastating impact on the tourism industry that has become the backbone of local economy in the two countries.