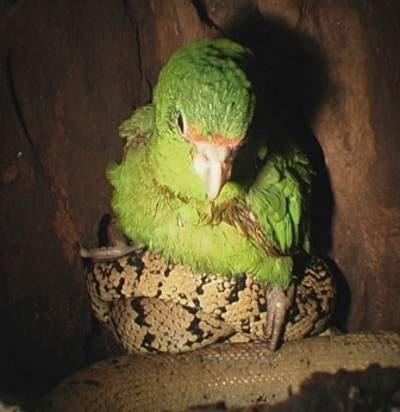 Nest predation by snakes - a particular concern for several endangered parrot species - may be reduced by removing vines from the nest tree, and isolating its canopy from neighbouring trees.

Of 63 nesting attempts by Black-billed Amazons in the study, 35 (56%) failed before fledging at least one chick. Predation of nestlings accounted for over one-third of total nest failures.

Two structural features of nest-trees were associated with nestling predation: nests with vines on the trunk were more likely to fail, and as canopy connectivity increased to neighbouring trees, so too did the probability of predation. Nest-trees in edge habitat were noted particularly for their abundance of vines. Of the nests that failed, 50% experienced predation in regenerating edge, compared with 21% in isolated trees in pasture, and none in the interior forest.

The authors say the appropriate isolation distance will depend upon the gap-bridging abilities of the target predators. In Puerto Rico a gap of 1.5 metres is likely to be adequate to prohibit canopy access of boas to nest-trees, as this species has not been observed crossing gaps greater than 0.5 metres.

To reduce the risk of nest abandonment by sensitive species, "snake-proofing"' activities should be done in the non-breeding season for species that show high site fidelity to a traditional nest-site, or at night for species that do not roost in the nest at night. If trimming is expected to cause too much disturbance to a nest-site, neighbouring trees can also be snake-proofed to isolate the nest stand.