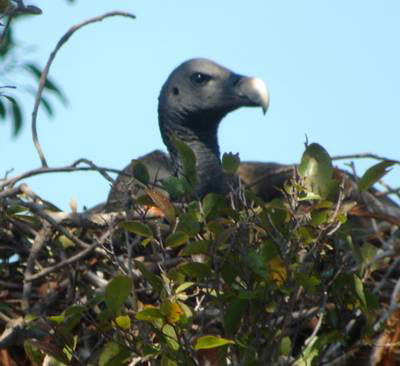 "We discovered the nest on top of a hill where two other vulture species were also found," said Song Chansocheat, of the Ministry of Environment/WCS Cambodia Programme. "Amazingly, there were also a host of other globally threatened species of birds and primates. It's a very special place."

"It's an important discovery, particularly because it's the first of its kind in South-East Asia." said Jonathan C. Eames, Programme Manager for BirdLife International in Indochina.

Slender-billed Vulture was once common in parts of South and South-East Asia but in recent years the population has declined sharply, some estimates suggesting by as much as 99%.

Veterinary use of Diclofenac, a drug used to treat cattle, has been the driving force behind the dramatic vulture declines seen in South Asia. However, use of the drug, now being phased out across the region, appears non-existent in Cambodia. As a result the Kingdom is now an important stronghold for vultures in the region - as long as conservation work can ensure that populations are adequately protected.

"Even without the shadow of Diclofenac, vultures in Cambodia share other threats like persecution and, particularly, a lack of adequate food sources in the wild - itself a symptom of Asia's disappearing megafauna (large prey)." said Bou Vorsak, Acting Programme Manager at the BirdLife Cambodia Programme. "Vulture conservation is therefore dependent on finding out which areas are important to vultures and taking steps, with local communities and provincial governments, to ensure they are adequately conserved."

The Cambodia Vulture Conservation Programme has been working to promote scientific research, with efforts on-the-ground to protect sites and to raise awareness of vultures as important aspects of Asian biodiversity. One of the most significant outcomes has been the use of 'vulture restaurants' - purposely placed dead livestock - as a means of attracting vultures to allow project staff to survey and monitor populations. The exercise is also an important opportunity to provide supplementary food for the vultures, which appears to be the main limiting factor on vulture populations.

"It's entirely possible that the supplementary food sources of the nearby vulture restaurants have directly boosted the reproductive success of Slender-billed Vultures at this new nest site." commented Vorsak.