Slender-billed Curlew added to Category A 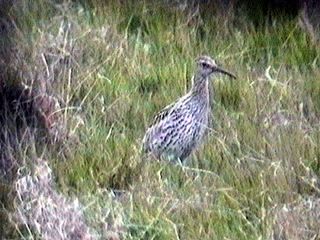 This freeze frame of the Druridge Bay Slender-billed Curlew is taken from video footage on the CD-ROM Guide to Rarer British Birds, published by BirdGuides.

The British Ornithologists' Union Records Committee (BOURC) has added Slender-billed Curlew Numenius tenuirostris to Category A of the British List as a result of the acceptance of a bird seen and photographed at Druridge Bay, Northumberland from 4-7 May 1998.

This is probably the most important record ever considered by the British Birds Rarities Committee (BBRC) and BOURC, since it concerns a species which is threatened with global extinction and whose breeding grounds have never been found. Furthermore, its occurrence in recent decades has been restricted to very irregular sightings at a small number of sites from south and east Europe east to Kazakhstan, and a handful of individuals which have wintered more regularly at a single locality in Morocco. There has, however, been no verified record from the last site since February 1995. Consequently, the chances of this species appearing in Britain seemed impossibly remote. Furthermore the Northumberland individual is considered to have been in first-summer plumage, therefore proving that the species certainly bred somewhere in 1997, giving some hope for its survival and conservation.

As if the record was not significant enough, opinions about the identification differed at the time, and speculation about the presence of a second small curlew added further controversy to the record.

As a consequence of the controversy surrounding such a rare and relatively unknown species, the record has been given a more comprehensive, time-consuming and wide-ranging assessment than any previous record. BBRC member Jimmy Steele undertook a Herculean task of amassing all known information on the species. This included consulting world experts, particularly Didier Vangerluwe (Royal Belgian Institute of Natural Science, Brussels) who has systematically examined and photographed most of the known skins in European collections, and who has a database of all records dating back to the 19th century as well as a collection of all known photographs. JS then prepared a file summarising all known information on the species, a collection of still photographs and video footage of the bird, taken by several different people.

There were two circulations of BBRC between 1999 and 2001. At the end of the first circulation, some concerns expressed by members were then addressed by further extensive and detailed systematic analysis by JS on the features of Slender-billed Curlew and how these relate to the races of Eurasian Curlew Numenius arquata and Whimbrel Numenius phaeopus. These concerns included the possibility of the bird being a hybrid or aberrant Eurasian Curlew, and the vexed question of the apparent second bird. All such concerns were satisfied during the second circulation, and in November 2001 BBRC voted for unanimous acceptance. The record then passed to the BOURC, as a first for Britain.

The BOURC took the opportunity to have a full discussion of the record and to collectively review all the material at its meeting in December 2001. This was in order to minimise the risk of loss of the file (which was so large and heavy that the normal postal service was deemed too risky, and the cost of courier postage from member to member was too expensive), and so as not to delay a decision on the record any further. A 34-page summary of descriptions, notes and comments on the species in general, and this record in particular, was emailed to BOURC members before the meeting. At the meeting members were shown the collection of photographs and watched videos of the bird before fully discussing the record. Then, rather than circulate the entire file to each member in rotation, members were asked to study the 34-page summary and send in their assessment to the Committee Secretary by email.

The BOURC usually conducts extensive research to assess the likelihood of any potential new bird on the British List having escaped from captivity. In the case of the Slender-billed Curlew, there is no evidence that the species has ever been held in captivity, so confirmation of the identification was all that was needed. In this, the BOURC would like to acknowledge the immense amount of work carried out by the BBRC Chairman and members. The outcome was a unanimous acceptance on to Category A of the British List (species which have been recorded in an apparently natural state at least once since January 1950).

The bird was originally found and identified by Tim Cleeves and constitutes probably the most remarkable record in recent history. Papers on the finding, identification, assessment process and conclusions will be published soon in British Birds.

NB Some of the video footage of the Druridge Bay Slender-Billed Curlew considered by the BOURC is reproduced on the CD-ROM Guide to Rarer British Birds, published by BirdGuides. The picture at the head of this page is a freeze-frame from this footage.