Skyscrapers kill 1,500 birds in Philadelphia in a day

Skyscraper collisions killed up to 1,500 migrating birds in Philadelphia, USA, on Friday 2 October alone, it has been revealed.

Although migrant birds colliding with the largely glass-pannelled high-rise buildings of cities along the US east coast is sadly a well-known phenomenon, it is rare for such a large-scale event to take place.

Retired social worker Stephen Maciejewski volunteers for Audubon Pennsylvania, and spends his mornings retrieving the unfortunate carcasses of the previous nights' victims from the streets of Philadelphia city centre, bagging each and noting details such as flight path, time and location of impact. Typically, Maciejewski may only find a few tens of birds each morning, but 2 October revealed something quite shocking.

In three hours to 8 am, he collected no fewer than 400 birds from a small stretch of the city centre that he routinely covers. Considering that building maintenance crews and district workers sweep the streets early each morning before commuters arrive, the figure is estimated to have been at 1,000-1,500 victims. Extrapolating that over the city of Philadelphia, it could amass to several thousand birds in a single night. 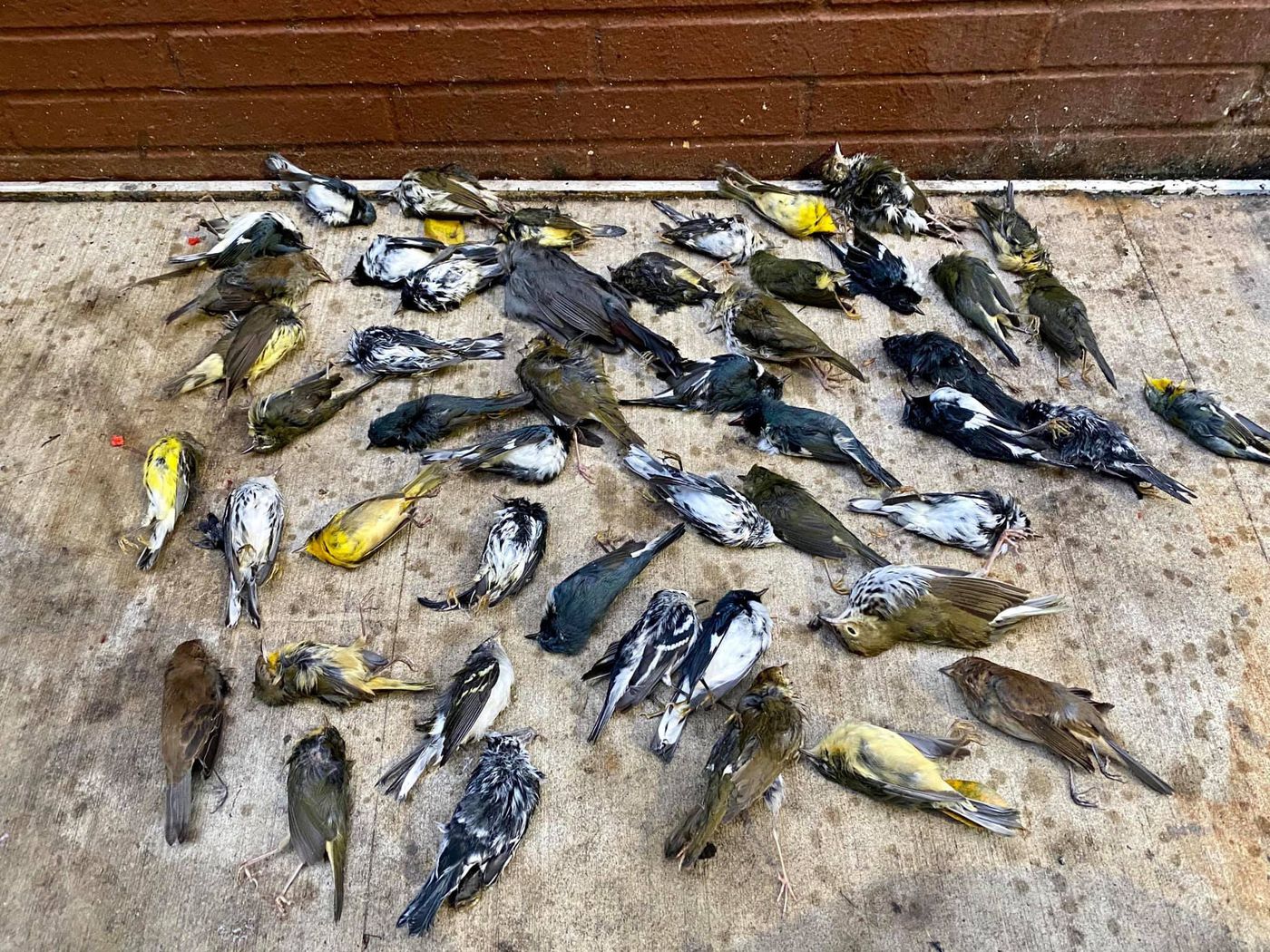 A small selection of the songbirds found dead on the morning of 2 October. Species such as Indigo Bunting, Grey Catbird and several warblers, including Black-and-white and Black-throated Blue, can be seen (Stephen Maciejewski).

Speaking to The Philadelphia Inquirer, Maciejewski said: "So many birds were falling out of the sky, we didn't know what was going on. It was a really catastrophic event. The last time something like this happened was in 1948."

It is suspected that a series of factors combined to create the "perfect storm" for such a high number of casualties on 2 October. A particularly large flight of migrating birds overnight in the eastern US seemed to coincide with a full moon and poor local weather conditions in Philadelphia, with low cloud and light rain likely causing migrating birds to fly lower than normal.

Such collisions are well documented across US cities, and the impact of high-rise buildings on migrating songbirds is so well recognised that in July the US House of Representatives introduced the Bird-Safe Buildings Act of 2019. If approved, it would require buildings to use methods designed to eliminate bird crashes. Examples of 'bird-friendly' glass being implemented in New York have already demonstrated what a positive effect it can have on reducing collisions, and the hope is that this will be adopted more widely in the near future.

"We have to bring people together to make the glass friendlier to birds," Maciejewski said. "We're contributing to the extinction of American songbirds."

Keith Russell, of Pennsylvania Audubon, added: "This is a very big issue in the world of bird conservation. The estimates are 350 million to one billion birds die every year colliding with buildings."