Globally, an albatross dies on a fishing hook every five minutes, while six out of seven marine turtle species are threatened with extinction. However, thanks to a clever design by Britsh company Hookpod, there’s now a proven answer to reducing bycatch.

The company is launching a new project off the coast of Brazil, a seabird and turtle hot-spot, to equip five longline fishing boats with Hookpods, simple devices that attach to longline fishing hooks and significantly reduce seabird bycatch. This initiative aims to show that this is the first solution to the problem of birds and turtles dying in pelagic longline fisheries. Sir David Attenborough has backed the project to implement new technology for fishing fleets. 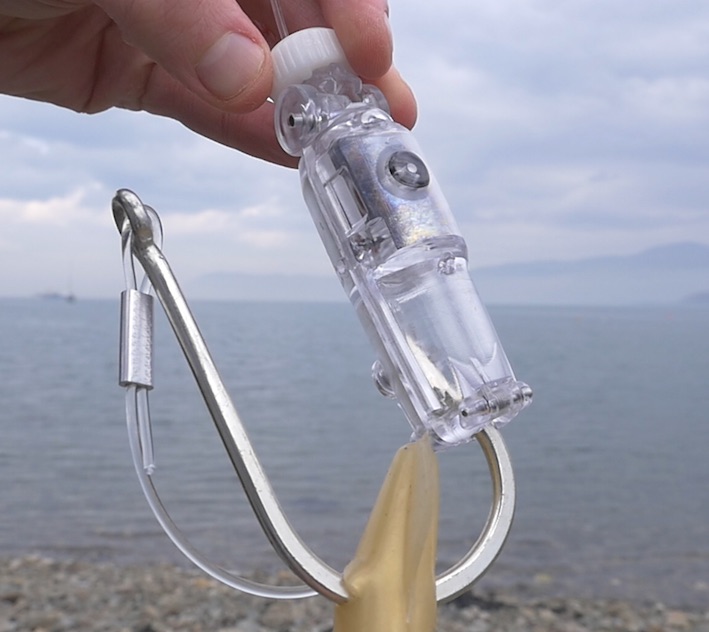 A close-up of a Hookpod applied to a longline hook (Will Philpin).

Fifteen of the 22 species of albatrosses are threatened with extinction. By far the biggest threat faced by the majority of these species, as well as other seabirds, is death by longline fishing. This technique involves very long lines of baited hooks – a single vessel may use a line extending 60 miles, from which can hang many thousands of baited hooks. Seabirds get stuck on the hooks and die. Every year, pelagic long-liners fishing for tuna and swordfish set about three billion hooks, killing an estimated 300,000 seabirds every year, of which many thousands are albatrosses.

Additionally, a recent study by Duke University, South Carolina, USA, found that 250,000 Loggerhead and 60,000 Leatherback Turtles are estimated to be inadvertently snared each year by commercial longline fishing. The data was collected from 13 nations with fishing information available. This indicates that global action is urgently needed to prevent the damage of longline fishing. 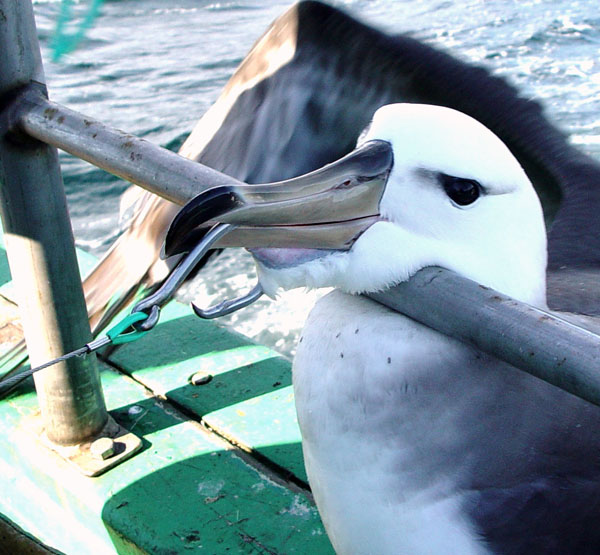 An immature Black-browed Albatross after becoming hooked on a longline (Dimas Gianuca).

When baited hooks are set from the stern of the vessel, before they sink they are still visible near the sea's surface. At this stage, foraging birds and turtles spot them and try to grab the bait before it sinks. They can become hooked, dragged under and drowned. This is bad news for the wildlife, but also for the fishermen, who would rather catch fish.

The Hookpod has been proven to significantly reduce the number of birds and turtles killed in tuna and swordfish fisheries. It achieves this by enclosing the point and barb of the hook as it enters the water, making it impossible for animals to become trapped. The pod has an air pressure mechanism which opens on reaching fishing depth and the baited hook is released to begin fishing. In short, it keeps wildlife off hooks, opens underwater and means fishermen can just catch fish.

When the fishing is finished, the Hookpods are simply pulled onboard, closed up again and stored along with the hooks and line in standard fishing bins ready to be used again. The device is very durable and long lasting, meaning it’s cost effective for the fishermen.

Sir David Attenborough commented: “Every day, hundreds of albatross die in longline fisheries. But there is a unique and exciting new solution to halt this. It's called a Hookpod. Hookpods cover baited hooks as they enter the water and stop birds getting caught as they dive for baits. They are effective, easy to use, safe and economic for fishermen. If every pelagic longline fishing fleet used Hookpods, I believe we can stop the accidental death of these magnificent ocean wanderers.” 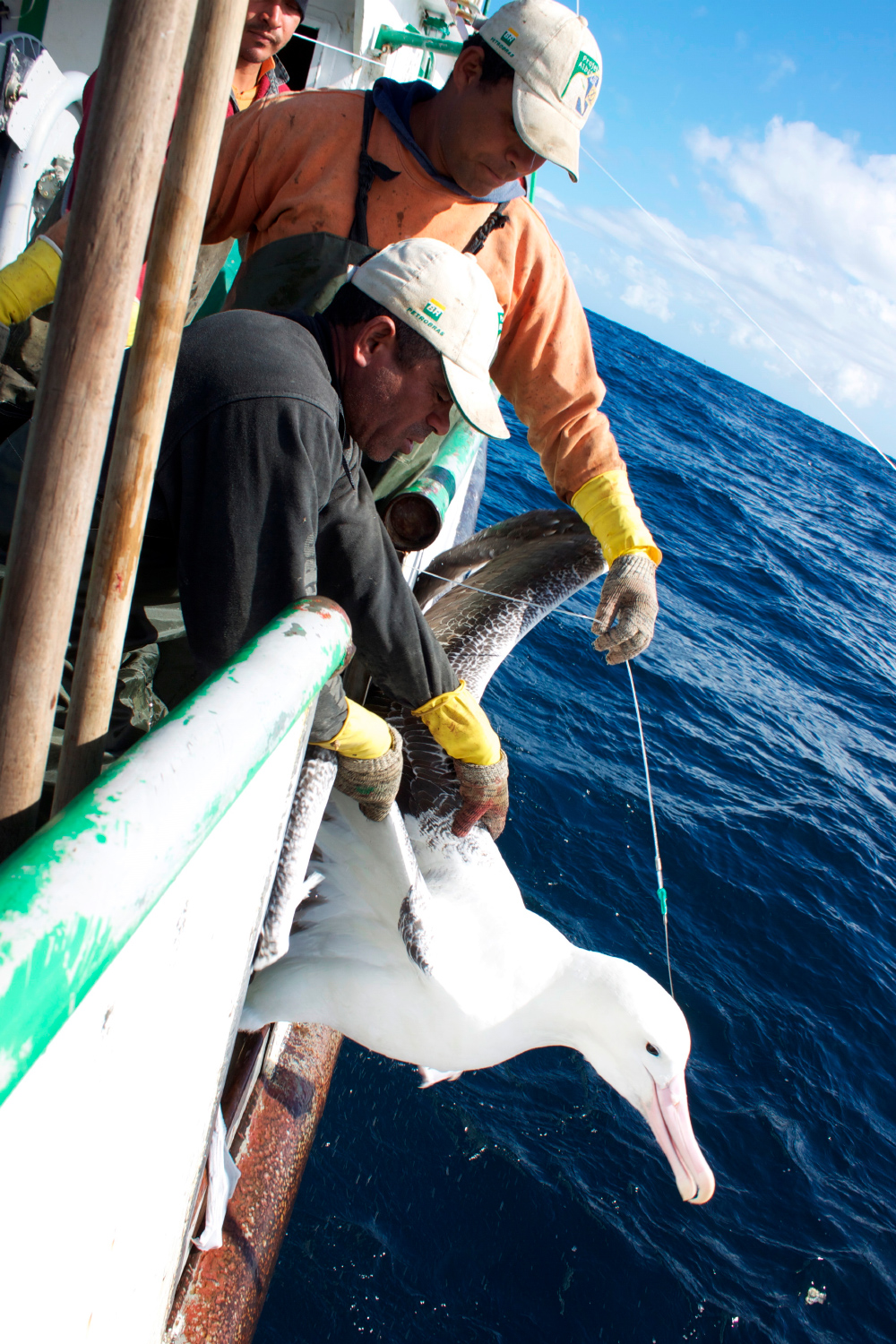 Another albatross to have fallen foul of longline fishing, but many aren't this lucky to survive and be rescued by fishermen (Fabian Peppes).

The power of crowdfunding

The devices have been tested over several years of successful trials in Brazil, South Africa, New Zealand and Australia, in many cases with the assistance of the Albatross Task Force, an RSPB team of seabird bycatch reduction instructors. The inventors are now seeking funds to equip five vessels in the seabird and turtle hot-spot off the coast of Southern Brazil, a known foraging area for albatrosses from the UK Overseas Territories of the Falklands and South Georgia. The company is hoping to raise £57,000. You can see the project here.

Working with local charity Projeto Albatroz, the project will supply and assist fishermen to use the new equipment, as well as monitor how the bycatch rates of both birds and turtles are reduced. It could prove that Hookpods are the first-ever fishery measure to prevent the accidental capture of several taxa at once.

The crowdfunding campaign will be online from 18 April to 17 May 2018, and fundraising is already well underway. Albatros Travel has already donated an amazing £12,500 after having auctions of illustrated Antarctic maps on its ships since last November. However, there is plenty more work to do.

Brazilian conservationist and scientist with Projeto Albatroz, Dr Dimas Gianuca, said: “Hookpod is the ultimate solution for reducing seabird and turtle bycatch, not only in Brazilian waters, but in longline fisheries around the world. It will be the game changer in the fight against the population declines currently threatening extinction for many species.”

To make a donation to this most worthy of causes, please visit the Hookpod Crowdfunder page.