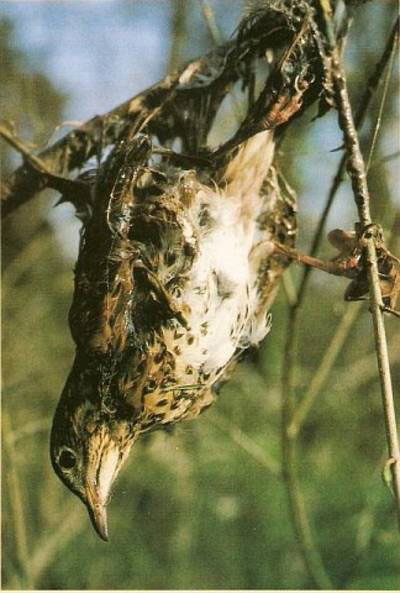 The Catalan government is trying to push forward legislation that would legalise the hunting of birds using glue, say SEO/BirdLife (BirdLife in Spain). This cruel method is specifically banned by European law because it in non-selective and difficult to adequately control. In the name of "tradition", the hunters use sound recordings to attract birds, luring them to branches covered in glue. Hundreds of thousands of thrushes migrating from northern Europe are thought to be at risk and will be killed in the Ebro area between October and November - that is unless the new legislation can be stopped.

In the same regulations, the Catalan government is trying also to legalise a form of net-trap hunting called filat, a technique which traps thirsty birds attracted to small pools of water. The technique is also forbidden in Spain, again because it is non-selective and thought difficult to control.

"The protection of nature is high on the agenda these days, but the Catalan government, which is 'progressive and ecological', prefers to look back on methods of hunting that harm protected species," said a spokesperson from SEO/BirdLife (BirdLife in Spain).

Get involved: sign the petition to protect birds from illegal hunting practices in Spain on the following website: http://www.gepec.org/barraca-i-filat/index_eng.html.