Sharpe's Longclaw - an endangered species in need of assistance

In June (2008) I was fortunate enough to be on a short birding trip in Nairobi with Shailesh Patel and George Kamau. Amongst the birds Shailesh and George were able to show me was one that I had never seen before and knew almost nothing about: the Endangered and highly range-restricted endemic Sharpe's Longclaw Macronyx sharpei. Closely related to pipits, longclaws are an exclusively African family and Sharpe's is one of the most exclusive! I managed to take a series of photographs of the one bird we saw as it wandered quite close to me through an unusual-looking grassland full of thick tussocks—much to Shailesh's surprise, as he'd warned me beforehand that the chances of getting good views of such a wary bird were pretty slim! 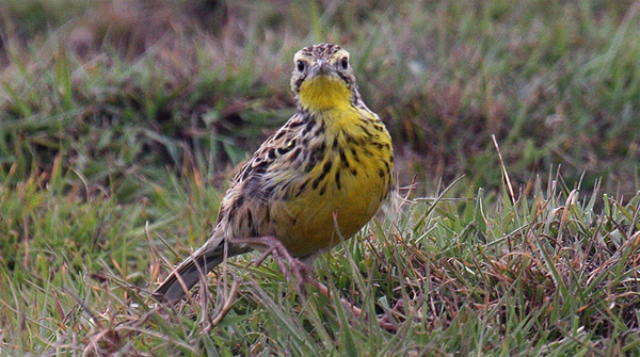 I posted the photos on 10,000 Birds at Sharpe's Longclaw: an Endangered Kenyan endemic, and added a postscript (subsequently updated) saying that if any conservation organisation or group wished to use the images for conservation purposes to contact me. To my surprise (and delight) I was contacted both by Nature Kenya (the BirdLife International partner in Kenya) and by Luca Borghesio, a PhD candidate based at the University of Illinois at Chicago (http://icarus.uic.edu/~lborgh2/) who was in Kenya and (amongst other projects) was setting up a survey to find out what the current population size of Sharpe's Longclaw really is.

Luca's description of the work he was doing really intrigued me and coincided with a post I'd written about Why I still Blog. The answer that I had arrived at was because it gave me—a passionate but otherwise unqualified birder—a chance to become involved in conservation by using the reach of what by any measure is a popular and well-visited blog. Luca asked me if 10,000 Birds would be interested in carrying his survey results. Would he, I asked, be interested in 10,000 Birds trying to raise money to help support the surveys themselves as well?

No researcher is going to say "no" to an offer of fund-raising (no matter how tentative), and a flurry of emails began as we sorted out the details to the satisfaction of both of us—i.e., how much money should we try to raise, where should the money be sent, who would receive it, and what would it specifically be used for...

Some six weeks later we are now in a position to launch properly the "Small African Fellowship for Conservation".

To summarise the project briefly, what we have pledged is to do everything we can to raise 2000 US Dollars (or more, of course), which will be combined with money raised by Luca to provide a one-year fellowship for a local researcher, Dominic Kamau Kimani, a) to conduct surveys of suitable longclaw habitat, and b) to take an education/awareness programme about the longclaw and the need to conserve its habitat into local schools. Not only are we actively supporting a project that should directly impact on decisions on future conservation measures taken for Sharpe's Longclaw, we have been officially named as partners to the National Museums of Kenya, an institution that manages three World Heritage Sites, 22 museums and over a hundred sites and monuments across the country, and who are organising and running the surveys (which we are incredibly excited about).

Rather than post all the information I now have on Sharpe's Longclaw, the surveys, the fundraising, and Dominic himself on one page—it would be incredibly long!—I am going to condense it into paragraphs below which all link to more detailed information on the blog. 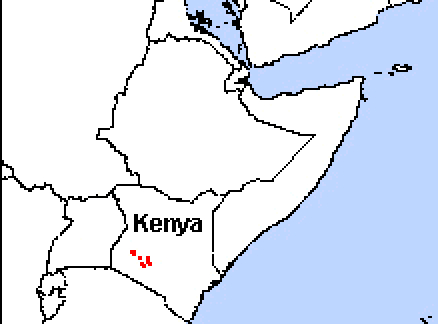 Before I do that though, please allow me a moment of self-indulgence: this project is precisely why I and my colleagues on 10,000 Birds blog so hard, and—hopefully without sounding self-important—we also genuinely hope that our experiences will inspire both other bloggers to get involved in conservation projects, and conservationists to use blogs and bloggers when looking to promote and support their work.

There are estimated to be between 10,000 and 19,000 Sharpe's Longclaw left and the entire world range of this lovely bird—the native grasslands of south-western Kenya—is rapidly disappearing. At current rates of habitat conversion, no natural grasslands are predicted to persist in the area within just 20 years; according to BirdLife International, the bulk of the population is now centred in just three locations, the most important of which is currently thought to be the Kinangop Plateau.

The "Small African Fellowship for Conservation" has been set up to fund the work of Dominic Kamau Kimani, a 26-year-old from North Kinangop Murungaru village. Dominic began birding when he was just ten and his interest has deepened steadily since then. 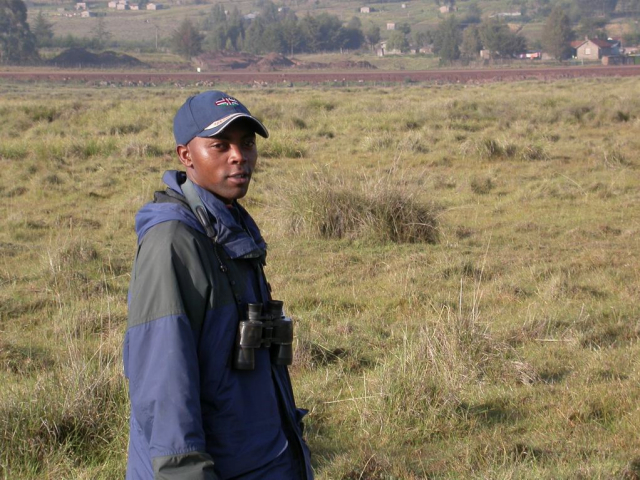 Given that he was born and lives in a small countryside village in Kenya, has not had a chance to attend good schools, and has no permanent job, Dominic has already achieved a remarkable amount—including acting as a volunteer Environmental Education officer for the Friends of Kinangop Plateau (FOKP), conducting ornithological research under the supervision of Dr. David Harper (University of Leicester) as a field instructor for the Earthwatch International Lakes of the Rift Valley Project, undertaking a Certificate course on Global Ecology and Wildlife management through distance learning, shadowing Tim Appleton at Rutland Water in the UK, and spending a week at BirdLife International's Cambridge headquarters! (Next time I hear some deadbeat here in the UK moaning how hard it is 'to get anything done' I'm going to point them towards this post.) I feel honoured to be trying to help such a hard-working and dedicated man who already has shown such incredible determination...

To read Dominic's CV (in his own words), please go to Dominic Kamau Kimani

Here at 10,000 Birds we have set ourselves a target of raising $2000 to support Dominic and the "Small African Fellowship for Conservation". We have already pledged to donate a minimum of $250 ourselves and are asking our readers to (please) donate just ONE dollar each through a Chip In widget on the blog (though of course we'd be very grateful for more than one dollar—but one will be fine!). Chip In collects money to a PayPal account that we have set up, and the money raised will be forwarded to an existing and secure bank account in Kenya belonging to the National Museums of Kenya, who will be responsible for passing the funds in monthly sums to Dominic.

$2000 is not a huge amount to raise (at least in western conservation terms), but in a country like Kenya it goes a long way. We have a number of strategies in mind to promote the project and raise the funds (keep an eye on the blog to see what), though we're under no illusions that it will be easy: if you're considering donating but aren't sure whether to or not please be assured that 10,000 Birds will take absolutely NO MONEY whatsoever from the funds raised, and every cent/penny/euro raised will be going to Dominic.

What will the money raised be spent on?

Basically, Luca, Dominic and their colleagues intend to update the distribution map of the Longclaw through intensive surveying, particularly looking to see if there are any populations inside protected areas or in areas that show some potential to become protected in the near future. The survey so far has already received financial support from the British Ecological Society and the Conservation Fund of the African Bird Club. Surveying in such remote and large areas—even in relatively inexpensive country like Kenya—needs to be funded, and they are still actively looking for more funds (which is where 10,000 Birds comes in).

Additionally, Dominic has written an education proposal detailing his plans to promote awareness of Sharpe's Longclaw within Kinangop itself.

The main objective will be to sensitise the local community towards the importance of Sharpe's Longclaw as a flagship species in conservation and why people need to save it from the verge of extinction. He proposes to select three working sites in Kinangop, and will conduct awareness raising "...through schools, existing conservation groups, youth groups, community groups, churches and sporting clubs".

We are extremely grateful to Eagle Optics, who have generously supplied Dominic with a new pair of binoculars, and to Penguin Books and author Nick Drayson, who have donated five copies of the splendid A Field Guide to the Birds of East Africa: a novel to use in a competition we will be holding in a few days.

If you would like to sponsor the project (with, for example, a 600-pixel-width banner advert on this page) please email me at charlie1000birds AT gmail DOT com

Thanks to the following blogs/websites who have supported the "Small African Fellowship for Conservation" with web links:

(If you have a blog or website and support the aims of the "Small African Fellowship for Conservation" please link to this page and feel free to copy/use any relevant images on this site to promote it. We will of course link back to you.)