Seas between the islands of Skye and Mull on Scotland's west coast are highly important for Basking Sharks, according to a report published on Wednesday by Scottish Natural Heritage (SNH). Each year large numbers of the sharks are seen in an area of the Sea of the Hebrides which is currently being assessed as part of the Scottish Marine Protected Areas Project.

The report sets out findings from the first two years of a project which aims to reveal some of the mysteries surrounding the world's second largest fish. The project is a joint venture between SNH and the University of Exeter (UoE), and is the first known to use satellite tagging technology to track the near real-time movements of Basking Sharks. 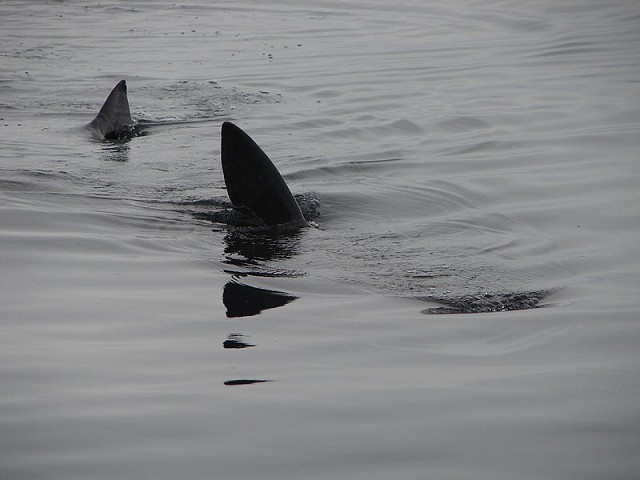 Twenty sharks were tagged in summer 2012 and a further 31 were tagged a year later. In both years the tagged sharks spent most of July, August and September in waters around the islands of Coll and Tiree and the Hyskeir lighthouse. In these months more than 80% of the satellite transmissions received from tagged sharks came from within the Sea of the Hebrides. This is seen as further evidence that the area is a special place for these sharks. Scientists at SNH and UoE believe they return each year to feed in the area's plankton-rich seas but the sharks' behaviour suggests they might come for other reasons too.

Dr Suzanne Henderson from SNH, who is managing the project said: "As well as cruising around and feeding at the surface they can be seen showing courtship-like behaviours, such as jumping clear of the water, known as breaching and swimming around nose-to-tail. These social behaviours suggest that the sharks return to the area not just to feed on the plankton bloom but for other reasons too, perhaps even to find a mate."

Information received from the tags also shows that the sharks spend these summer months at different depths, moving up and down in the water on a daily basis. A large proportion of their time is spent in shallow water less than five metres deep, but they also spend time in deeper water down to 250 metres. There doesn't seem to be a single pattern to this daily vertical migration, and it appears that the sharks adapt their behaviour to local conditions.

Dr Matthew Witt from UoE explained: "We know quite a lot about Basking shark biology and distribution but relatively little about their seasonal movements, although we have already learnt a lot from the first two years of this project. We now know that as autumn approaches the sharks start to spend more time in deeper water, with less activity at the surface. Two of the sharks reached depths of over 1000 metres, indicating that they were off the continental shelf. After September the sharks head away from Scotland and evidence suggests that the Celtic and Irish Seas are an important migration route for them. Only one shark was tracked migrating south via the west coast of Ireland, others were tracked moving south to the Isle of Man and south-west England. One shark was seen to head as far south as the Canary Islands."

Information from the tags is fed to a website where people can follow the sharks' movements. After a few months the tags tend to fall off but some of the tags attached in 2013 are still on the sharks.

Suzanne said: "One of the sharks we tagged last year which migrated to the Isle of Man, and likely beyond, has recently returned to Scotland this year. This is exciting because although we believe it's the same sharks returning to the Sea of the Hebrides each year, this is the first evidence we have. It highlights the importance of the route between the Isle of Man and Scotland for Basking Sharks. Coincidently this is also the first shark we tagged last year, which was named Soki by Grace — a budding scientist who helped the project by finding a detached tag the previous year in Loch Fyne.

"There are some other sharks with tags still attached, so we may see more returning to Scotland this year, providing further evidence of the importance of the Sea of the Hebrides for Basking sharks. People can keep an eye on the tracking website and hopefully watch this unfold."

Matthew said: "We will be out tagging sharks again this year, which will hopefully reveal more secrets about the lives of these majestic fish. Some of the tags contain additional information which is not transmitted, so it's important that we retrieve these. We'd urge anyone who finds a tag around the UK's shores to get in touch. There is a reward available for each tag returned."

The tags are silver grey, torpedo shaped and 15 to 18 cm in length with a small antenna. If found please pick up and contact the SNH office in Oban on 0300 244 9360, or email baskingsharks@snh.gov.uk.

For more information on the project and to follow the movements of the tagged Basking sharks online, go to http://www.snh.gov.uk/Basking-shark-tagging.

Another report published on Wednesday as part of the Scottish Marine Protected Areas (MPAs) Project reveals some of the science behind Scotland's possible MPAs. It describes how detailed ecological guidance on selected marine wildlife was produced to help SNH complete their assessment of the features and sites that could make up Scotland's MPA network.