Secrets of Migration Revealed in a First for British Science 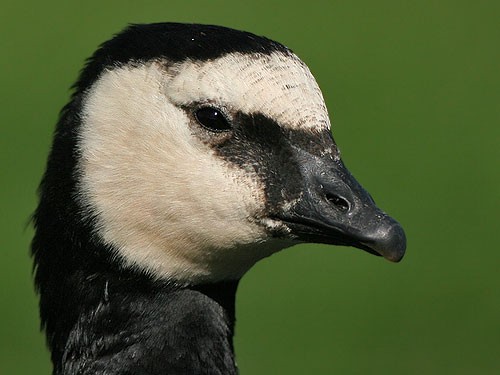 The Wildfowl and Wetlands Trust have used satellite tracking to successfully follow the migration of wild geese as they migrate from Britain to the High Arctic and back again. This is the first time that any species of goose, duck or swan has been successfully tracked from its wintering grounds in Britain through a complete migratory cycle.

Last winter, four wild Barnacle Geese were fitted with tiny, solar-powered satellite tracking devices at WWT's wetland centre at Caerlaverock on the Solway Firth. Their movements were then followed in real time, and with pinpoint accuracy, as they flew 1,800 miles north to the High Arctic islands of Svalbard.

Two of the birds didn't make it after they were caught up in violent storms and swept off course into the North Atlantic but the others have just arrived safely back at WWT Caerlaverock.

"We knew a lot about this great migration from our long-term ringing studies", said Dr Larry Griffin, who leads the WWT project team, "but there are still big gaps in our understanding that affect our ability to ensure the birds' protection."

"We didn't know where they went, for example, between crossing the Arctic Circle and arriving on their nesting islands far to the north. Now, we've discovered a vital pre-breeding area beside a magnificent fjord in the south of Svalbard, where a relatively mild local climate produces an early thaw on the rugged mountain slopes."

The two surviving geese are Magnar and Sir Peter. The first is named after Magnar Norderhaug, a Norwegian scientist who was among the first to study the Barnacle Geese in Svalbard. By chance, Magnar's feathered namesake chose to breed on the very same island, among thousands of others, where the researcher had first worked in 1962. Sadly, Magnar Norderhaug died before he could be told this.

The fourth goose is named after Sir Peter Scott, the famous painter and naturalist who founded WWT 60 years ago next month. As the two birds flew south into the record books over the last few days, excitement began to grow at Caerlaverock. The GPS units gave their positions to within five metres and the scientists watched with fascination as the geese raced neck-and-neck across the icy Barents Sea and down the Norwegian coast.

Sir Peter came in first, reaching Scotland at Lossiemouth and making his way to Caerlaverock via Aberlady Bay, east of Edinburgh. With him was a single gosling, exhausted after flying so far at the age of just three months. But there was no adult female. The researchers hope that Sir Peter and his mate became separated somewhere on the way south and that they might be able to find one other again among the 25,000 Barnacle Geese now back on the Solway.

John Doherty WWT's Director in Scotland, said: "This is very exciting research. It shows us just what these little geese have to contend with on their epic journeys. They are travelling the same areas of the globe as the Vikings did but with even less technology to help them. We might not look back on those human explorers as advanced, but we certainly think of them as tough."

You can follow the fortunes of Magnar and Sir Peter by visiting WWT Caerlaverock or via the website at www.wwt.org.uk/barnacle. Nine more high-tech adventurers will be online very soon.