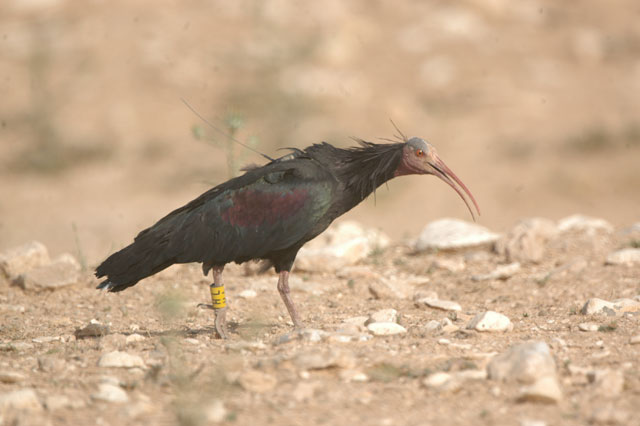 The rarest birds in the Middle East are returning to breeding grounds after being fitted with satellite tags to unveil the mystery of their migration journey.

The reappearance of one Northern Bald Ibis in Palmyra, Syria, with two others on its tail, has been heralded as a success for the nine-month tracking project that began when scientists tagged three adult birds last summer.

The trio, Sultan, Salam and Zenobia, the latter named after Palmyra's third-century warrior queen, have flown more than 3,800 miles across seven countries on their migration route spending the winter in the Ethiopian highlands 50 miles from the country's capital Addis Ababa.

The National Geographic Society, RSPB and others are funding the project. Bedouin nomads and rangers from the Syrian Ministry of Agriculture and Agrarian Reform are protecting the breeding site and the new tracking data will help conservationists safeguard the birds on migration and over winter as well.

Dr Ken Smith, a senior scientist at the RSPB, said: "The birds' return is fantastic news and a huge relief. Hunting, poisoning by the pesticide DDT or disturbance is stopping the colony increasing despite the birds breeding well in Syria. Knowing the migration route is a major breakthrough and means we can now tackle the huge challenge of protecting the birds throughout the year. The next riddle we must solve is where the young birds go and how we can safeguard them as well."

The Palmyran colony was only discovered in 2002 and its numbers have never risen above 13. Little was known of the birds' migration before the project began but researchers have plotted each stop-over and the length and time of each leg. They have followed the birds' flight on a special tracking map on the RSPB's website. The tracking devices led to the discovery of the birds' wintering site in Ethiopia.

The birds' return route was one of the factors that surprised scientists most. They flew west rather than east of the Red Sea, crossing from Sudan to Saudi Arabia at the Sea's widest point of 180 miles.

"Our hearts were in our mouths because they set out to sea quite late in the morning and were still far offshore when night fell," Jeremy Lindsell, an RSPB research biologist said. "These birds have been surprising us from the outset but we are determined to save them. The technology has worked superbly and the tags have lasted far longer than we expected."

Tagging a young bird in Palmyra is the task for this summer and Lubomir Peske, an expert from Prague, is likely to be involved. "It is a delicate job and a huge responsibility, especially for such a rare species," he said. "You must watch the birds for many days to understand their habits and hope they quickly resume normal behaviour once the tag is fitted. Attaching the tracking device is like fitting an invisible umbilical cord; that's how close you feel to the birds. The success of the project so far is hugely gratifying and makes me very optimistic about tagging a young ibis this summer."

Paul Buckley, International Officer at the RSPB, said: "None of the nine younger birds in Syria last summer have been seen and that suggests that they use a different over-wintering site. A year ago we were sure the birds would stay together but these ibis are behaving very differently. Tracking a young bird should solve this new mystery and perhaps broaden the level of the protection the colony needs."

Abdulkhalek Assaad, National Project Coordinator with the MAAR, said "We are pleased to see our birds returning once more. We will do our best to protect them and ensure they breed successfully. We are encouraged by this new knowledge about where they spend the winter and hope to find out more about the young birds through the use of additional satellite tags."

Ibrahim Khader, Head of BirdLife Middle East, said: "The birds' migration remains perilous and it is our job to make that journey safer. If we can do that, this population will have a much better chance of survival. Without this project, the Northern Bald Ibis would have been consigned to history and hieroglyphics."

The route of the northern bald ibis can be followed at http://www.rspb.org.uk/tracking/northern_bald_ibis.asp.

From Syria the birds travelled south across Syria, Jordan, Saudi Arabia and Yemen to Ethiopia returning via Eritrea, Sudan, Saudia Arabia and Jordan.