Seabird couple keep up their record

Legendary lovebirds Peckster and Flip are back at their summer residence at no. 33 Staple Newk, RSPB Bempton Cliffs. The celebrity seabird couple have amazed RSPB staff and volunteers for years by being the first of Bempton's almost 9,000 pairs of Gannets to return to their nest, lay an egg, raise a chick and then see them off into the big wide world. And this year is no different. 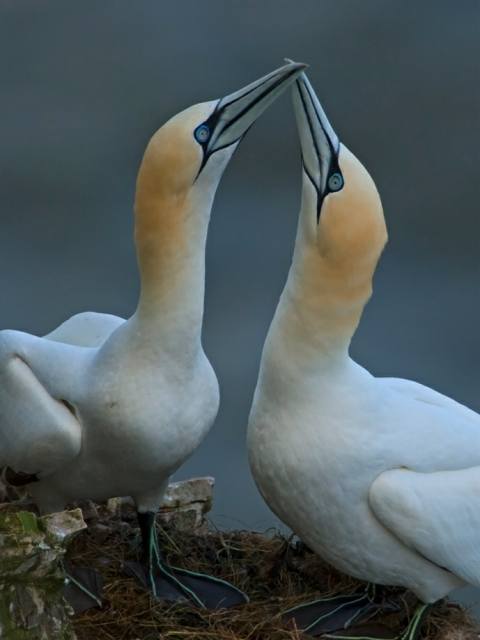 "When Peckster and Flip are back, we know that spring is around the corner," said Alan Dalton, who helps run the reserve between Bridlington and Filey. "They are busy fixing up the nest at the moment, getting it ready for that big egg to arrive. I'm sure they just like being first at everything, being one up on their neighbours every year. We'll now be keeping a keen eye on Peckster and Flip to see if they maintain their record of being the first to lay an egg. If visitors go to Staple Newk, there is a good chance we will have a volunteer showing people the Gannets through a telescope and we will introduce them to Peckster and Flip."

The birds — known for years simply as Pair 33 after the nest site they return to every spring — were last year christened Peckster and Flip by Bay Primary School pupils who held a competition to name them.

Gannets are huge seabirds with ice-white bodies, yellow heads and black-tipped wings spanning six feet. In the spring and summer, RSPB Bempton Cliffs is the best place in the whole of the country to experience the sights, sounds and smells of nesting seabirds, including Razorbills, Guillemots and Puffins. At the height of the season, there are 200,000 adults and chicks on the cliffs.

Staple Newk is a huge chalk arch on top of which the famous Gannet pair make their nest. From the viewing point above, visitors can watch them going about their daily business, from feeding their chick to having a few disputes with the neighbours.

Bempton Cliffs is Britain's largest mainland breeding Gannet colony and last year, numbers grew by an amazing 900 pairs. A survey by RSPB staff and volunteers last summer showed that there were at least 23,000 Gannets at the reserve and along the coastline to Flamborough Head.

Alan said: "Despite growing concerns about the dramatic changes occurring in the UK's marine environment, the Gannet somehow seems to rise above it all. Yorkshire's Gannets are the only ones to breed anywhere in England, so we are delighted to be able to tell such a fantastic success story. The growth in numbers of Gannets over the last 40 years has been phenomenal. There were only 20 pairs here in 1970, so to see the cliffs today is really heartening. But, when we see big numbers of seabirds on the cliffs we should not forget that they depend on a healthy and safe sea to find food."

"While waters used by Bempton's Gannets look like they will get legal protection, the same is not true for many other seabirds. The new Marine Bill will allow protected areas to be created out at sea, which should provide safe havens for feeding, resting and migrating seabirds. Sadly, it now seems as if that will not happen. The official guidance on how to identify these protected areas contains a list of species for which protected areas can be set up. Incredibly that list doesn't include a single seabird. Our Gannets are here in large enough numbers to be protected under European law. Sadly, it now seems our brand new UK law will not offer the same protection to other seabird colonies which, although smaller, are still of national importance."