Although the species has bred on the islands for decades, the resulting eggs and chicks were always eaten by Brown Rats while they were still in their burrows. However, last winter the islands’ rats were removed and conservationists are now celebrating the first sightings of healthy youngsters.

So far 10 chicks have been recorded by project staff, volunteers and trail cameras. By this time of year, the adult shearwaters have already left the chicks to migrate to South America for winter. These chicks, left in a healthy condition by their parents, are now coming outside their burrows at night-time to stretch their wings and ‘stargaze’ – by looking at the stars, they learn the location of their natal colony so they know exactly where to come back to.

Once they leave the islands they will live out at sea, moving to the southern hemisphere where they winter off the coast of Brazil. with a potential lifespan of 55 years, they make the same long migrations every year. 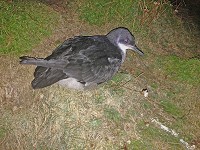 RSPB Project Manager, Jaclyn Pearson, said: “We are absolutely delighted to announce this news. It is down to the help of everyone involved in the project so far, particularly the community living on the islands who continue to keep these islands rat-free, an official status we hope to achieve by early 2016. In the meantime, with these 10 Manx Shearwater chicks the project is having exactly the effect we hoped for.

“We need everyone’s help who visits St Agnes and Gugh to help us to ensure biosecurity measures. Over the next couple of months we have activities to discourage and remove food sources from any [remaining] rats. There will be beach cleans, bin days and an ‘apple day’ where we will remove and juice windfall apples. Please do come and get involved if you are visiting the islands.”

Isles of Scilly Seabird Ecologist Vickie Heaney said: “For so many years I've been returning to the burrows looking for evidence of chicks fledging, only to find old cobwebs over the entrances and no signs of life, so it’s been really brilliant this year to see live chicks stargazing. With their remnants of fluff, they looked fit and healthy, and ready for their awe-inspiring migration.”

If people think they see rats on either St Agnes or Gugh they are asked to call the project's ‘Rat on a rat’ hot-line on 01720 422153. The team and islanders will then inspect the area and set up surveillance and incursion response measures.