The Saiga Antelope — one of the world's most threatened mammals - was brought to the brink of extinction. Now conservationists, led by Government of Kazakhstan in partnership with the Association for the Conservation of Biodiversity in Kazakhstan (ACBK), the RSPB and the Frankfurt Zoological Society (FZS), are giving this Central Asian antelope and its diverse steppe habitat renewed hope. 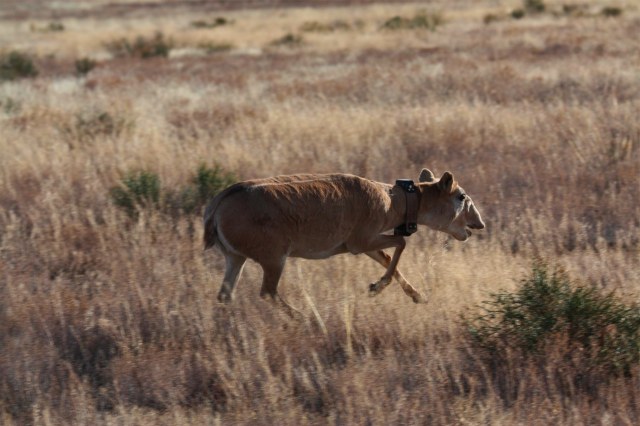 A Saiga Antelope is released on the Kazakhstan steppes after having a satellite tag fitted. (Photo: Steffan Zuther (rspb-images.com))

For the first time in Central Asia, 20 Saiga Antelopes have been captured and released with GPS-satellite tags to reveal the secrets of their migration. A 20-strong mobile Kazakh/German team using a survey aircraft, off-road vehicles and motorcycles used hidden nets to capture, tag and release 20 adult Saiga Antelope rapidly and safely over four weeks in October and November.

The main Kazakh population of this enigmatic Critically Endangered species is now recovering steadily, through a combination of building a greater understanding of Saiga Antelope behaviour, effective mobile anti-poaching units and ambitious landscape-scale conservation to increase protection of grassland steppe and semi-desert habitats. Saiga Antelope are grazers essential to the survival of internationally important steppe and semi-desert habitats that support a rich diversity of unique plants and animals.

The conservation programme — known as the Altyn Dala Conservation Initiative (Altyn Dala means 'golden steppe' in Kazakh) - is creating an integrated network of protected grassland habitat reserves extending through central Kazakhstan. Over 5.2 million hectares have already been legally protected, but Altyn Dala plans to increase this by up to five million hectares — more than twice the size of Wales. This flower-jewelled network rich in tulips will protect and restore vast areas of steppe grassland and semi-desert that make up the typical landscapes of Central Asia. Historically, Saiga Antelope and other grazing mammals, such as Kulan (wild asses), helped to maintain these grasslands and the continued existence of these grazers is crucial to preserving this area, the largest remaining natural grasslands left in the world.

Working in close cooperation with the Committee of Forestry and Hunting of the Ministry of Agriculture, and the Ministry of Environment Protection of the Republic of Kazakhstan, the Altyn Dala Conservation Initiative is an international partnership of the Association for the Conservation of Biodiversity of Kazakhstan (ACBK), with the RSPB and the Frankfurt Zoological Society. 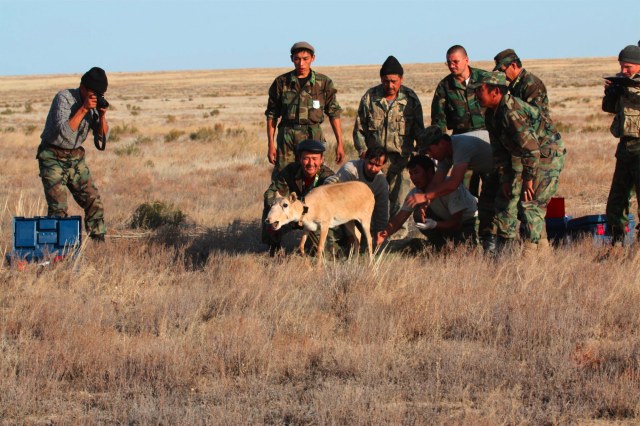 In the 1970s, there were an estimated one million Saiga Antelope grazing the grasslands of Kazakhstan. Today, Kazakhstan is home to the largest part of the world population, but there are only 81,000 individuals. After the collapse of the Soviet Union economic hardship of rural populations together with the opening of the borders to China led to massive poaching of the antelopes both for their meat and their horns, which are used by practitioners of traditional Chinese medicine. By 2002, the antelope's population was brought to collapse to the brink of extinction, and targeted poaching of males for their horns caused a major gender imbalance in the remaining population, exacerbating the dire situation. As a result, the World Conservation Union (IUCN) listed the species as Critically Endangered.

Fortunately, rigorous recent conservation efforts have led directly to an improving picture for the Saiga Antelope, with the primary Kazakh population in the Altyn Dala region rising from below 4,000 animals in 2002 to over 45,000 earlier this year. Comparable to the famous vast herds of Wildebeest on the African plains, Saiga Antelope are migratory but very little is known about their current distribution and migratory routes. For the first time, 20 antelopes are now being tracked by satellite as they move south perhaps up to 800 kilometres across Kazakhstan from their calving grounds to their remote wintering sites.

Vitaliy Gromov, Director of ACBK, said: "Understanding more about the movements of the Saiga Antelope across the sweeping landscapes of Central Asia will enable us to learn which areas are most important to them, so that we can work with the Government to ensure their protection. Knowing where the animals are will also be invaluable in our ongoing battle against the poachers." 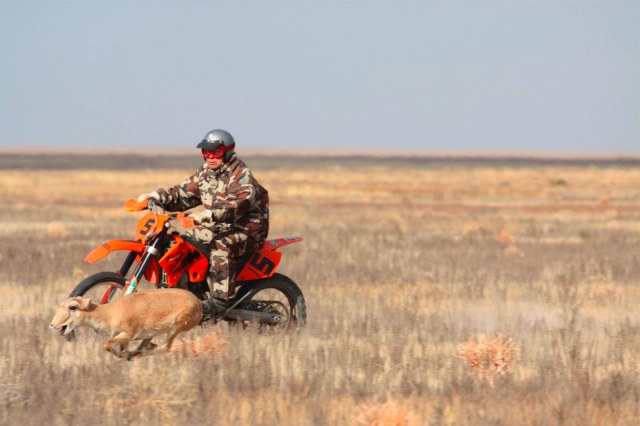 A motorcyclist rounds up a saiga antelope in Kazakhstan to fit a satellite tag. (Photo: Steffan Zuther (rspb-images.com))

Khairbek Mussabayev, the Deputy Chairman of the Committee for Forestry and Hunting within the Ministry of Agriculture — the Government of Kazakhstan's main conservation agency, said: "Kazakhstan has invested a great deal into saving this rare species and to meet its international responsibilities. Growing numbers in recent years shows the effectiveness of undertaking these conservation actions. We are optimistic that we are on the right path to restore the Saiga Antelope population to a sustainable level."

Wolfgang Fremuth of Frankfurt Zoological Society said: "We all marvel at the mass migration of Wildebeest in Africa. Just like the Wildebeest, the Saiga Antelope is a driving force in a migration ecosystem. There are very few large migration ecosystems left, and there are now excellent chances to restore one of the greatest in its entirety. Fortunately, the vision and commitment of the Kazakh government and conservationists, using experience from across the world, means the Saiga Antelope is now showing a sustained recovery, and this will be pivotal to this complete ecosystem being restored."

In 2008, the ACBK established two mobile anti-poaching units, to complement the Kazakhstan government's anti-poaching efforts across the vast Kazakh steppes. Recently, the aerial anti-poaching unit spotted a poacher trying to evade arrest on a motorbike with five dead Saiga Antelope. He was caught and the video footage of his attempted escape and capture will provide vital evidence in the forthcoming trial. Arrests are being made, but the number of poachers being caught is rising. So far this year the 12 Government and two ACBK anti-poaching units have discovered 17 cases of poaching, compared with eight in all of 2008.

Dr Norbert Schaffer of the RSPB said: "At first, it could seem a little odd that the RSPB is involved with a programme to help save a large mammal facing extinction. But when you understand that the Saiga Antelope is a keystone grazing species essential to the future of the steppes of Kazakhstan, and that internationally important and globally threatened bird populations are dependent upon steppe habitats for their survival, the link becomes clear and the urgency immediately apparent."

The Saiga Antelope is crucial to the conservation of steppe grasslands: it disperses seeds of steppe plants over large distances; its droppings help to fertilise the soil; and the trampling action of its hooves pushes seeds into the soil, allowing them to germinate. The continued grazing of Saiga Antelope and other large native mammals has kept the grasslands open, creating habitats for characteristic birds of the steppe, including the Great Bustard and the Critically Endangered Sociable Lapwing. Like the Saiga Antelope, both of these birds are facing global extinction. A healthy population of Saiga Antelope also creates a niche for scavenging birds and mammals, such as the Black Vulture and wolves.

Press release issued by the RSPB on behalf of the Government of Kazakhstan in partnership with the Association for the Conservation of Biodiversity in Kazakhstan (ACBK), the RSPB and the Frankfurt Zoological Society (FZS).

Prehistorically, the Saiga used to occur across Europe as far west as Britain.